Pia Zadora (* 4. May 1954 in Hoboken , New Jersey as Pia Alfreda Schipani ) is an American actress and singer . She was best known for numerous films and records in the 1980s, including the number-one hit When the Rain Begins to Fall with Jermaine Jackson . She also played on Broadway and appeared as the standards singer . In 1996 she ended her career and withdrew into private life. She has been performing regularly since 2011. 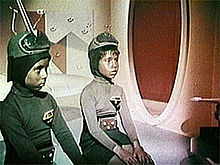 Pia Zadora started her career in show business at a young age. In 1961 she appeared on Broadway at the side of Tallulah Bankhead in the play Midgie Purvis . Engagements in Fiddler on the Roof and Henry, Sweet Henry followed . Zadora made her film debut in 1964 in the B-movie Santa Claus Conquers the Martians . She only returned to film in 1981 and starred alongside Stacy Keach and Hollywood legend Orson Welles in the incest drama Butterfly . For this role she received both a Golden Globe for best young actress and two Golden Raspberries for worst newcomer and worst actress. The film and Zadora, who was seen in numerous nude and erotic scenes, received devastating reviews, including from film-dienst : “All too striking drama about a 'forbidden love', played weakly in the female lead and at times involuntarily ridiculous. “Zadora later distanced herself from this and subsequent films.

In 1982 she played in the action comedy Fake-Out (published in Germany with different titles such as Der Cop von Las Vegas or Der Bulle und das Flittchen ) alongside Telly Savalas , before her most famous film followed in 1983. The drama The Lonely Lady , in Germany also a career through all beds , was supposed to be her big breakthrough, but it turned into a financial and artistic fiasco that is still counted among the worst films of all time in the USA. The work, which is based on a novel by Harold Robbins , is about a young screenwriter who desperately wants success in Hollywood, but is sexually abused by men and also exploited humanly. Again, Zadora received a Golden Raspberry for worst actress of the year - the film received five more Golden Raspberries, which was a record at the time that was only set by Showgirls twelve years later . The film service classified the film as "acting and dramaturgically completely inadequate".

Zadora's reputation as an actress was finally ruined after The Lonely Lady . The television movie Pajama Tops received little attention - Rock Aliens ( Voyage of the Rock Aliens , 1984) was not released on video in the US until four years later. This was followed by only smaller roles such as in John Waters' cult film Hairspray in 1988 or in Die nackte Kanone 33⅓ in 1994 . In the latter film, she played herself and received good reviews for the first time in her career.

Zadora was more successful as a singer - but it took many years to finally achieve adequate commercial success. In the early 1960s she recorded a single called Bye Bye Boy as "Little Pia" . Her recording career only really started when she was already the wife of Riklis. In the late 1970s, Zadora dabbled as a country singer, releasing about half a dozen singles. The song Baby It's You climbed to number 55 in the American country charts in 1980. After the less successful interlude in country, Zadora switched to pop in 1982 and released her first, but unsuccessful LP Pia . After all, the dramatic ballad I'm in Love Again made the top 50 of the US pop charts. Already in 1981 she caused a sensation when she opened several concerts for Frank Sinatra . In the same year she sang the title song It's Wrong for Me to Love You for the drama Butterfly .

Things went even better for Zadora with the cover version of The Clapping Song - released in the winter of 1982 and her only top 40 hit in the US charts in early 1983. The recording was produced by the German producer Jack White , who at the same time helped Laura Branigan to become world famous. With his help, Zadora experienced her most successful phase. In 1984 she was nominated for the Grammy Award for best rock singer with the song Rock It Out . Her biggest hit When the Rain Begins to Fall (1984) in a duet with Jermaine Jackson , however, only reached number 54, but was a big hit in Germany (number 1) and continental Europe. The song comes from the flopped movie Voyage of the Rock Aliens . In the course of 1985 she was able to land two more hits ( Let's Dance Tonight and Little Bit of Heaven ) in the European charts - whereby she achieved her best placements in Germany, but also in Switzerland and Austria. The album Let's Dance Tonight (1984) also sold very well in Europe.

In 1984 she won the Golden Prize at the 13th Tokyo Music Festival for the Japanese-only song Wild Dream . The following year Zadora recorded the album Pia & Phil with the London Philharmonic Orchestra - including standards and legendary songs from the Great American Songbook . Here, too, it was suspected that Riklis provided a five-digit sum for the recordings and bought the orchestra. Even the late star arranger Don Costa ( Frank Sinatra , Paul Anka ) worked on a song. Zadora saw behind the perfectly voiced recordings the chance to establish herself as a serious entertainer. The LP reached number 113 in the US and stayed in the hit lists for 20 weeks. In 1986 she recorded another album with standards, I Am What I Am .

Two years later, Zadora teamed up with the immensely successful producer team Jimmy Jam and Terry Lewis , who made world careers with Janet Jackson at the time . The sound on the album When the Lights Go Out , which was released in 1988, also sounds a lot like the Jackson albums Control or Rhythm Nation 1814 , which were also made during this time. Even Zadora's voice was arranged accordingly. The album was not released in the US - but in England, where the single Dance Out of My Head became a mini-hit. The 1989 album Pia Z. - the last official Zadora album - was released in the USA, but flopped despite a dance chart hit with Heartbeat of Love . In 1990 she was back on stage with Frank Sinatra. Zadora also received good reviews for Crazy for You in the mid-1990s . Nevertheless, Zadora ended her career in 1996 and withdrew into her private life until her comeback in 2011. In 2018, All or Nothing at All, their first studio album in 29 years, followed, which was released again the following year with two more songs and a different cover.

In 1988, Zadora and Riklis caused a sensation by purchasing the Pickfair property in Hollywood, which they demolished shortly thereafter. The building, which was previously owned by film legends Douglas Fairbanks and Mary Pickford and symbolized the glitz of Hollywood's silent film era , was considered a historically significant landmark and the demolition was heavily criticized. Zadora justified the demolition in an episode of the series Celebrity Ghost Stories in 2012 by saying that the house was haunted.