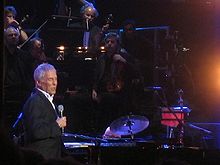 Burt Bacharach [ bɝt-ˈbæ.kə.ˌɹæk ] (born May 12, 1928 in Kansas City , Missouri ) is an American pianist and composer . Since 1957 he has been one of America's most successful composers, around 130 of his works have hit the singles charts in his homeland. Most of his songs were created in long-term collaboration with the lyricist Hal David and then with Carole Bayer Sager . Particularly successful were the songs written with David in the 1960s and 1970s for Dionne Warwick . Bacharach received almost all major awards in the entertainment industry for his achievements, including several Grammys , Oscars and Golden Globes . 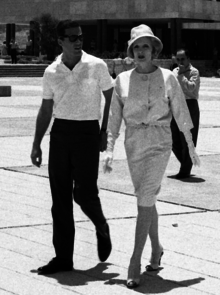 Burt Bacharach and Marlene Dietrich during a tour in Israel, 1960

Bacharach was born in Kansas City in 1928 to a journalist and music teacher and grew up in New York. He studied music at McGill University and the Mannes Conservatory, among others. a. with the composer Darius Milhaud . In 1947 he wrote a first song for the band leader Sammy Kaye .

From 1957 to 1961 he toured as a pianist , arranger and later also band leader with Marlene Dietrich . He also wrote his first hits for various artists, such as Perry Como ( Magic Moments , 1958). This started his long-term collaboration with copywriter Hal David (1921–2012). The two met in 1957 at Paramount Records and in the same year had a first hit with The Story of My Life for Marty Robbins .

1961 began his actual career as a composer; he also discovered the singer Dionne Warwick , with whom he and Hal David had a longstanding partnership. Until the 1970s, Bacharach became very well known and popular as a composer and producer of softly arranged pop music , which at the time was decried as easy listening by many critics . Especially with the lyricist Hal David, but also with colleagues like Bob Hilliard and Neil Diamond ( Heartlight ), he wrote a large number of globally successful hits, such as Walk on By , Make It Easy on Yourself (for Warwick), I Never Fall in Love Again (for Jill O'Hara in the musical Promises, Promises , 1968) or This Guy's in Love with You . Bacharach composed a total of 60 US "Top Forty" hits.

He received an Oscar for his soundtrack ( Raindrops Keep Fallin 'on My Head ) for the film Two Bandits . His career experienced a break shortly afterwards in the early 1970s when the film Lost Horizon , for which he wrote the music with Hal David and Dionne Warwick, flopped at the box office and he fell out with his partners.

At the end of 1979 he met the singer and songwriter Carole Bayer Sager , with whom he published the first songs the following year. Bayer Sager's last studio album, Sometimes Late At Night, was created in 1981 in collaboration with Bacharach, who again acted as arranger and producer. Also in 1981, Christopher Cross reached number one on the US singles charts with Arthur's Theme (Best That You Can Do) . This title, written with Bayer, Cross and Peter Allen, heralded the final comeback of Bacharach. More number one hits followed with That's What Friends Are For for the trio Dionne Warwick, Gladys Knight and Elton John and On My Own for Patti LaBelle and Michael McDonald in 1986.

In 1993 Bacharach, David and Warwick worked together again for the album Friends Can Be Lovers , and finally again in 1999 for the biography of Jacqueline Susann , Isn't She Great? , for which they contributed the song On My Way . Bacharach's last great success was the album Painted from Memory , which was created in collaboration with Elvis Costello in 1999, as well as the song Walkin 'Tall with the lyrics by Tim Rice in the same year .

Bacharach had a few cameo appearances in Hollywood films, for example in all three Austin Powers films or in the series The Nanny and Nip / Tuck .

The most famous interpreters of his music include Dionne Warwick , Marlene Dietrich , Connie Francis , Aretha Franklin , Luther Vandross , Jack Jones , Tom Jones , The Carpenters , Sérgio Mendes , Elvis Costello , Neil Diamond , Frank Sinatra and Dusty Springfield . In 2007/08 Trijntje Oosterhuis (Traincha) recorded two albums with new interpretations, partly together with Bacharach. His music is praised for its catchy melodies and its own sound, which is created through the targeted use of piano , oboe and strings, by many colleagues such as Brian Wilson , Frank Zappa , John Zorn and Noel Gallagher . Bacharach himself says that his music is heavily influenced by Maurice Ravel's work Daphnis und Chloe ; therefore stir his feeling for lush instrumentation and the use of unusual instruments in pop, such as glockenspiel and triangle , as in You'll Never Got to Heaven, vibraphone in Make It Easy on Yourself. His work for Dionne Warwick is based on gospel and rhythm and blues ; Titles like I'll Never Fall in Love Again and Paper Mache exude the airy, light atmosphere of Bossa Nova .

“Bacharach's songs go beyond expectations of what a pop song should be. Complex harmonies and chord changes with unexpected twists and turns and modulations, unusual tempo and rhythm shifts, in a multitude of bars ... but with him the whole thing sounds so natural that you can't get it out of your head and stop listening to it Pipes. (...) This is more than just pop songs; there is in-depth research into the musical material, which should be studied and preserved with the same care and patience as many other great works of art. "

Burt Bacharach was married four times, with Paula Stewart (1953-58), the actress Angie Dickinson (1965-81), the songwriter Carole Bayer Sager (1982-91), with whom he wrote some songs, and since 1993 with Jane Hansen who is 32 years younger than Bacharach. He has four children. His son Oliver plays the keyboard in Bacharach's current band. In addition, he has also been breeding horses of his own ( thoroughbreds ) since the early 1970s . Nikki, the only common child of Burt Bacharach and Angie Dickinson, took in 2007 at the age of 40 years, the life . She suffered from Asperger's Syndrome .

In addition to the Oscar mentioned, in 2001 he received the unofficial Nobel Prize for Music , the Polar Music Prize , together with Karlheinz Stockhausen and Robert Moog . At the end of 2005, after a break of several years, he released another solo album (with Chris Botti , Elvis Costello and Rufus Wainwright also participating), "At This Time", an angry reckoning with the American government policy of recent years - again packaged in his typical sound and awarded a Grammy . On February 10, 2008, Burt Bacharach was honored with the Lifetime Achievement Award , which honors his life's work as a musician and songwriter in a special way.

In 2015, Rolling Stone listed Bacharach, together with Hal David, on rank 32 of the 100 best songwriters of all time .

The name Bacharach has its origin in the small German town of the same name (also known as Bacharach am Rhein) in the Middle Rhine Valley in the Mainz-Bingen district in Rhineland-Palatinate . It refers to the German-Jewish roots of the Burt Bacharach family.