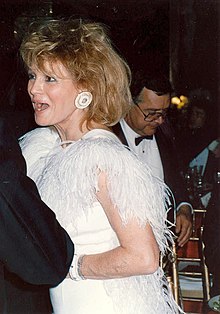 Angie Dickinson at the 1989 Academy Awards

Angie Dickinson (* the thirtieth September 1931 in Kulm , North Dakota , as Angelina Brown ) is an American actress .

She got a role in Das blonde Glück , a comedy with Doris Day , at the age of 22. Many other films followed with famous leading actors such as John Wayne , Rod Steiger , Roger Moore and Frank Sinatra . She had one of her best-known roles as Feathers , John Wayne's lover, in Howard Hawks ' western classic Rio Bravo (1959). She received a Golden Globe in the Best Young Actress category for this performance . In the 1960s she took on major film roles in well-known Hollywood productions such as Frankie and his cronies , Adventures in Rome and Point Blank .

From 1974 to 1978 Dickinson played the leading role in the television series Police Woman (German broadcast from 1988 on Sat.1 under the title Make-up and Pistols ). For her role as Sergeant Suzanne "Pepper" Anderson she received another Golden Globe for Best Actress in a Series (Drama) in 1975 . On television, she has had other guest roles on series such as The Smoking Guns , The People at Shiloh Ranch , Perry Mason, and On the Run .

In 1952 she married Gene Dickinson, a football player; the marriage lasted until 1960. From 1965 to 1981 she was married to the musician and composer Burt Bacharach , in 1966 their daughter Lea Nikki Bacharach was born; she suffered from Asperger's Syndrome and died of suicide in January 2007 .

In the documentary "Marilyn Monroe - I would like to be loved" (2017, by Eckhart Schmidts) it was alleged that Angie Dickinson was a lover of John F. Kennedy.