Howard Winchester Hawks (born May 30, 1896 in Goshen , Indiana , † December 26, 1977 in Palm Springs , California ) was an American director of the classic era of Hollywood . Hawks made a name for himself across all genres as one of the most important American film directors of his generation. He created important classics such as Scarface ( gangster film ), Leopards are not kissed ( comedy ), Dead sleep tight ( film noir ), Rio Bravo ( western ) and The thing from another world ( science fiction ). In 1975 he received the Oscar of Honor for his life's work . 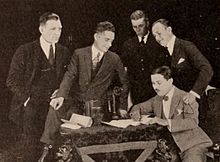 Howard Hawks (third from left, back) signing a contract with Warner Brothers (1920)

After the birth of Kenneth Hawks, the family settled in Neenah , Wisconsin , in 1898 . From 1906, the family began to spend more and more time in Pasadena , California , where they finally settled completely in 1910. In 1911, his sister Helen Bernice died of an inflammation of the intestine, which Hawk's mother religiously believed not to have treated. When his sister Grace Louise also died of untreated tuberculosis in 1927, Howard and Kenneth Hawks blamed their mother for it.

Hawks graduated from college in Exeter, New Hampshire , and then studied mechanical engineering . He made his first experiences with silent films at the Players Lasky Studios. In the First World War he joined the US air force . Even while he was in the army, he recorded a lot, but all of his records were lost in the 1973 fire in a military archive. After the war he worked, among other things, in an aircraft factory. He tried to get back into the film business in many ways, including jobs such as film editor , film architect , prop master or even as a stuntman . He first encountered the Hollywood film industry in 1918 . He was working behind the scenes when the production designer for a Douglas Fairbanks film was canceled and Hawks was allowed to step in. Fairbanks was so excited that he got him further engagements. Hawks worked in the following years as an assistant director and wrote his first screenplays. When the director of a film by Mary Pickford was canceled due to drunkenness, the chance came again for Hawks. Pickford was so pleased with him that he was able to make a name for himself as a talented director.

The Road To Glory (1926) was his first own film. From then on, his directorial work was characterized by a wide variety of genres (comedy, crime, western). He succeeded in setting new standards in various genres of film art. His film Scarface (' Scarface ') is particularly well known ; it was the first major gangster film, and with it Hawks created a milestone in film history. His classic film Dead Sleep tight is one of the most famous film noirs to this day . In the easy subject, on the other hand, he shot with Leopard You Don't Kiss and His Girl, for special cases, two of the most renowned examples of screwball comedy . Other major films were: The adventure drama SOS Fire on Board with Cary Grant ; the 11 Academy Award-nominated war film Sergeant York (1941) with Gary Cooper ; the adventure film to have and not to have (1944), which made Lauren Bacall and Humphrey Bogart one of the most legendary screen couples in film history; the respected western classic Red River (1948) starring John Wayne and Montgomery Clift ; and the Marilyn Monroe- starred comedies Darling, I'm Getting Younger (1951) and Blondes preferred (1953). As a producer he appeared with the science fiction classic Das Ding aus Another Welt . In the late stages of his career, Hawks had success with the late wests Rio Bravo , El Dorado and Rio Lobo .

Hawks in particular shaped the western genre with its own note, which can be described as follows: Often the main character is put under strong psychological pressure in order to observe the reaction - will he withstand the situation or break with it? To create such situations, he used means such as overlapping dialogues in order to increase the speed. This gives the conversation its own dynamic and creates tension. In addition, Hawks always added a touch of humor to many of his films. An example are the John Wayne classics Red River , Rio Bravo , El Dorado and Rio Lobo . Hawks' work is also valued for his versatility, he has made successful and stylish films for various film genres such as comedy, drama and thriller. His directorial style was mostly deliberately reserved, the focus was on the plot: A good director is someone who doesn't annoy his audience, Hawks once said.

Typical of Hawk's directorial style is his interest in fast-paced staging, which he was particularly proud of: “Every cinema audience has two or three people who understand faster than anyone else. I make my films for these three. They start to laugh and the others do the same. "

In addition, Hawks established in his films for the time noticeably emancipated female characters who acted self-confidently and quick-witted. In the film reviews , they came to be known as the Hawksian woman . An example of this is Lauren Bacall in Dead Sleeping Stuck or Rosalind Russell in His Girl for Special Cases : “With this director, who was particularly proud that his wife was an even better sniper than him, women also have women in his Regularly film ahead. "

After Hawks was long neglected by film critics like Alfred Hitchcock with the remark that he was an overly commercial director, he was discovered as an important filmmaker in the 1960s with the beginning of the Nouvelle Vague . Hawks became a role model for numerous filmmakers, including: Robert Altman , John Carpenter , Quentin Tarantino , Peter Bogdanovich , Martin Scorsese , François Truffaut , Michael Mann and Jacques Rivette . Jean-Luc Godard even described Hawks as the "greatest American artist".

Although Howard Hawks had directed numerous cinema classics, he was always overlooked at the annual Academy Awards . He received only one Academy Award nomination in 1942 for the film Sergeant York . However, he helped many Hollywood actors to international success and numerous Academy Awards with his films. For his life's work he received an honorary Oscar in 1975 after he had long since ended his career. He was never nominated for a Golden Globe Award .

Walk of Fame
(year unknown) Star on the Walk of Fame : 1708 Vine Street

Directors
His directorial style and lively natural dialogue have been judged to be exemplary by later directors such as Robert Altman , John Carpenter and Quentin Tarantino . Other directors such as Peter Bogdanovich , Martin Scorsese , François Truffaut , Michael Mann and Jacques Rivette also admired his work. Brian De Palma dedicated his remake of Scarface to him and Ben Hecht . Jean-Luc Godard called him “the greatest American artist”.

Library of Congress
The films The Big Sleep , Bringing Up Baby , His Girl Friday , Red River , Scarface , Sergeant York , The Thing from Another World , and Twentieth Century were from the Library of Congress , culturally significant classified as' and in the Registry National Film added.