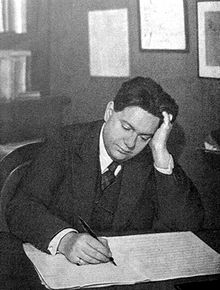 Milhaud came from a wealthy, long-established Jewish - Provencal family. Although he was born in Marseille, he grew up in Aix-en-Provence . According to his own testimony, the geographical and religious origins remained of strong formative influence for him throughout his life.

His systematic music education began at the age of 7 with taking up violin lessons. He wrote his first own compositions in 1905. In 1909 he continued his violin studies at the Paris Conservatory , but gave up these three years later in favor of composing. He studied with André Gedalge ( counterpoint , composition ), Charles-Marie Widor (composition) and Vincent d'Indy (conducting). In Gedalges courses he got to know Arthur Honegger and Jacques Ibert , among others . During this time, mainly songs based on poems by contemporary French poets and a first opera ( La brebis égarée , 1910–1915) were written.

In 1912 he became acquainted with the poet Paul Claudel , with whom he was to be linked by a lifelong friendship and artistic collaboration. When Claudel was sent to the then Brazilian capital Rio de Janeiro as the French ambassador in 1916 , Milhaud, released from service in the First World War , accompanied him to South America as his attaché . There he got to know the Brazilian folklore and popular music, which would have a strong influence on his music in the following years.

In 1918 he returned to France. He had contact with the circle around Jean Cocteau and Erik Satie and eventually belonged to the Groupe des Six . His compositions brought him first successes, but also scandals.

In 1925 he married his cousin Madeleine . In Paris in the early 1930s, he met regularly with fellow composers Barraine , Honegger, Ibert and Messiaen in the salon of the Dutch composer Rosy Wertheim .

After the outbreak of the Second World War , Milhaud and his wife emigrated to the USA and became a teacher of composition at Mills College in Oakland (until 1971). From 1948 he also led a composition class at the Paris Conservatory (until 1972). In the following years he taught alternately on both continents. His lessons were attended by artists as diverse as the jazz musician Dave Brubeck , the minimalist Steve Reich , the symphonic composer Allan Pettersson and the avant-garde artists Karlheinz Stockhausen , Larry Austin and Iannis Xenakis .

He saw himself strongly influenced by the music of the Mediterranean (especially the Italian), but little influenced by German music. Despite all the diversity of his work, it is characterized by a pronounced melody , a pronounced sense of sound with a largely renunciation of strict and formal techniques of composition . In harmony Milhaud frequently used bi- / polytonality . Also polyrhythms found in his works. One of his best known chamber music works is Scaramouche for two pianos, which he arranged for many ensembles, including saxophone and wind quintet . Of all the composers of his and older generations who set themselves the task of at least one composition to integrate the then newly emerging jazz or at least its music-making phenomena into their compositions (the best-known among them were Stravinsky , Hindemith , Shostakovich , Satie and Schulhoff ) Darius Milhaud was the one who came closest to this music as a classical composer.

In 1939 he worked with Arthur Honegger and Roger Désormière and wrote the music for a film by Raymond Bernard called Cavalcade d'amour . The film consisted of three parts, about lighthearted men and the varieties of love that took place in 1430, 1830 and 1930. Each of the three composers chose an epoch to compose for. Milhaud decided on the period around 1430 and chose the story of a troubadour from his homeland, René d´Anjou , a Comte de Provence. King René liked to relax in a windless area in the country under the open sky with a picnic. This place was named La cheminée du roi René . This film music became Milhaud's most famous and popular wind quintet with imaginary scenes from the life of King René with a procession ( Cortège ), a morning serenade ( Aubade ) and jugglers ( Jugglers ), a description of the local area ( La Maousinglade ), boat competitions on the River Arc ( Joutes sur l 'Arc ) a hunting scene ( Chasse à Valabre ) and ends with a night scene ( Madrigal Nocturne ). The world premiere took place after Milhaud's escape at the University of Southern California in 1941 by the San Francisco Wind Quintet .

The Suite d´après Corrette is based on some themes by the French composer Michel Corrette , which Milhaud worked on very freely. It is dedicated to the Trio d´Anches , a very famous wind ensemble at the time.

The Divertissement en trois Parties for wind quintet was written in April 1958. It's a soundtrack for the film Gauguin by Alain Resnais . The opus number here is not chronological. The titles of the three movements are Balance (with a Provencal theme), Dramatique (with extreme chords) and Joyeux (polyrhythmic). You can feel the kinship with his wind quintet La cheminée du roi René, 20 years his senior, especially in the last movement . Here the musical development of Milhaud becomes clear in a generation with a world war in between.

The new building of the Conservatory in Aix-en-Provence Conservatoire Darius Milhaud was named in his honor. The building in the city center, designed by the Japanese architect Kengo Kuma , contains a concert hall with 500 seats and a stage area of ​​240 m².

(the 14th and 15th string quartet can be played individually or performed together as a string octet).