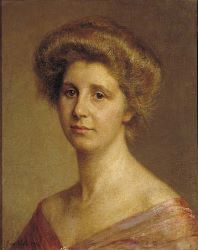 Wertheim was the daughter of Johann Gustaaf Wertheim and Adriana Roza Wertheim born. Enthoven. Her father and grandfather Abraham Carel Wertheim were respected bankers in Amsterdam. She attended a French boarding school in Neuilly, where she also received piano lessons. She graduated from the Conservatorium van Amsterdam , where she studied piano with Ulfert Schults and with Sem Dresden and Bernard Zweers harmony and counterpoint . In 1921 she passed the state exam in piano playing with the Koninklijke Nederlandse Toonkunstenaars Vereniging , the Royal Dutch Association of Tonkünstlervereinigung.

From 1921 to 1929 she taught at the Conservatorium van Amsterdam, composed songs and choral works , and directed women's and children's choirs. Among them was the children's choir Eilandkinderen ( Inselkinder ) consisting of Jewish children from the poorer districts of Amsterdam. In 1929 Wertheim went to Paris for six months , but stayed there for six years. In addition to her compositional work, she reported on Parisian musical life for the Amsterdam daily Het Volk and studied composition and instrumentation with the composer Louis Aubert . Her apartment became a meeting place for numerous artists, including fellow composers Honegger , Ibert , Messiaen and Milhaud . A particularly close friendship developed with the French composer Elsa Barraine . Wertheim's works from this period, all in the neoclassical style , are characterized by their lightness and playful attitude, harmoniously based on the French impressionists .

In 1935 she went to Vienna for a year to study counterpoint with Karl Weigl . The following year she traveled to New York to teach and to prepare performances of her own works. Her string quartet from 1931 and the Divertimento for chamber orchestra as well as a number of piano works were performed at a concert by the Composers' Forum Laboratory .

In 1937 she returned to her hometown of Amsterdam. In 1940 the Residentie Orkest played its piano concerto, conducted by Willem van Otterloo . After Germany's invasion of the Netherlands , it held secret concerts in its basement, mostly with forbidden works by Jewish composers. At the beginning of the German occupation, she was still involved in the resistance and hid persecuted people in her basement. From June 1942, Wertheim had to hide in different places because of her Jewish origin, mostly in Het Gooi and Amstelveen . On several occasions she exposed herself and the families who hid her to great danger through thoughtless excursions. Nevertheless, she survived the Nazi regime , while the majority of her family was abducted and murdered by the National Socialists. After the end of the Nazi occupation she taught at a music school in Laren, but soon fell seriously ill. For the last few years of her life she was bedridden.

After her death, Max Vredenburg wrote in the Nieuw Israëlietisch Weekblad (Neue Israelitische Wochenblatt) that her work was still being neglected in the Netherlands. Rosy Wertheim wrote over ninety pieces of music, most of which are undated.

Characteristics of their compositions

The flautist Eleonore Pameijer describes the composer's style as follows: “Rosy Wertheim wrote particularly lyrical music. She was gifted with a very complex sense of harmony . Initially she concentrated on the late Romanticism , for some time she flirted with the octatonic , which was very popular in the Netherlands in the 1920s (heard among others in the compositions of Sem Dresden and Leo Smit ). Her stay in France had a major impact on her later work. (...) Your compositions are never easy or straightforward; she writes multi-layered music, looking for the depths and heights in a way that reminds a little of Brahms . It's not small gestures, but big ones. Even in her simplest songs, Rosy Wertheim always shows complex layers. "

“During the war my compositions were still being performed in this country, but of course I couldn't be present, and I was also performed in America. The Germans stole all my possessions and all my books - but now they are gone and I am trying to put in order what is left of my life. "