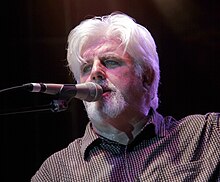 Michael McDonald (born February 12, 1952 in St. Louis ) is an American singer , keyboardist and songwriter who was best known as a member of the Doobie Brothers in the 1970s.

1975 McDonald's started music career when he as a backing vocalist on the album Katy Lied of Steely Dan participated. The following year he became a permanent member of the Doobie Brothers as a replacement for the singer and songwriter Tom Johnston, who had dropped out due to illness . For their platinum album Takin 'It to the Streets he wrote half of the songs, including a. the hits Takin 'It to the Streets and It Keeps You Running . With Carly Simon he wrote the hit You Belong to Me in 1977 .

His permanent membership with the Doobie Brothers led to significant changes in the musical style of the band, heard especially impressively on the gold album Living on the Faultline . In addition to his work with the Doobies, he played on albums by Bonnie Raitt , Kenny Loggins , Elton John , Christopher Cross , Lauren Wood and singer Amy Holland . McDonald's greatest commercial success was as a member of the Doobie Brothers with the hit What a Fool Believes, which he composed with Kenny Loggins. In addition to being a number one hit in the US in 1979, the song also won three Grammys .

After the Doobie Brothers split up in 1982, McDonald began a solo career. In the same year Warner Brothers Records released his debut album If That's What It Takes, which rose to number 6 on the US album charts and was awarded gold . The single I Keep Forgettin '(Every Time You're Near) reached number 4 in the US charts . McDonald's second solo work No Lookin' Back could not repeat the success of its predecessor and reached number 45 on the US charts. The following year, the duet composed by Burt Bacharach and Carole Bayer Sager and Patti LaBelle On My Own reached number one on the US charts. Also in 1983, he landed with the collaboration with James Ingram , Rod Temperton and Quincy Jones written R & B -Song "Yah Mo Be There" a great success in the US and UK charts. Another top 10 hit McDonald was able to record in 1986 with the title Sweet Freedom (US 7th place) from the soundtrack to the film These two are unbelievable .

It was not until 1990 that the third solo album McDonalds was released on Reprise Records , but it was not a commercial success. In 1992 he toured with Donald Fagen . The next album, Blink of an Eye, from 1993, was another commercial failure. In 1996, McDonald toured with the Doobie Brothers. In 2000 the album Blue Obsession was released by Ramp Records , the release of which was planned for 1997. In 2001 a Christmas album was released. In 2003 McDonald signed with Motown and released the successful comeback album Motown , which sold over 1.2 million copies and went platinum. The album Motown Two , released in 2004, was gilded with over 500,000 sales. In 2008 McDonald released an album with Motown classics and for the first time again three of their own titles. Another Christmas album was released in 2009.

Michael McDonald has been married to singer Amy Holland since 1983. They have a son and a daughter. The couple live in Nashville .

Michael McDonald is one of the main characters in the twelve-part comedy video series "Yacht Rock", which is about "Smooth Rock" from the 1980s such as Toto , Hall & Oates , Steely Dan , Michael Jackson , Kenny Loggins & Co.