This article deals with the rock musician Tom Johnston, for the Scottish composer of the same name see Tom Johnston (Classical Music) , for the politician see Thomas Johnston . 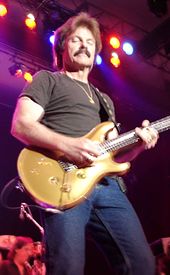 Tom Johnston (actually Charles Thomas Johnston , born August 15, 1948 in Visalia , California ) is an American rock singer and guitarist who was best known as a member of the Doobie Brothers .

Johnston took an early interest in rhythm and blues . When he got a guitar at the age of twelve, he first tried his hand at songs by James Brown , Little Richard and Bo Diddley . As a teenager he played in various blues and soul bands . When he later attended college in San José , he met Skip Spence , who was playing as a drummer for Jefferson Airplane at the time. It was he who introduced Johnston to John Hartman .

In 1969 Johnston, Hartman and Gregg Murph formed the band Pud, which was renamed The Doobie Brothers the following year. Johnston was also active as a songwriter, including the hits Listen to the Music and Rockin 'Down the Highway from his pen. In 1975 he fell ill for a short time and was unable to take part in a tour. As a replacement Michael McDonald was hired, through whose influence the style of the band changed. Disliked these changes, Johnston left The Doobie Brothers in late 1977.

In 1979 Warner Brothers Records released his first solo album Everything You've Heard Is True , followed by Still Feels Good in 1981. Neither of the two had any major commercial success and in 1988 Johnston returned to the Doobie Brothers, who had since left McDonald. In 1989, Johnston wrote The Doctor , which became the band's first top 10 hit since 1980.