This article covers the musical. For a film adaptation of Norman Jewison from 1971 see Anatevka (film) . 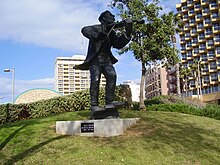 Fiddler on the Roof memorial in Netanya, Israel

The musical takes place around 1905 in the Pale of Settlement of the Russian Empire , more precisely in the fictional shtetl Anatevka, in which a community of Polish Jews attaches great importance to tradition. Without this tradition, the Jews would be like a fiddler on the roof, according to the milkman Tevje. His three oldest daughters are of marriageable age and envision their dream husband doing housework. But they know that traditionally they are only entrusted to the person whom Jente, the matchmaker ( Schadchen ) , chooses for them. Tevje dreams of a small fortune (song If I was once rich ) and promises his eldest daughter Zeitel to the wealthy butcher Lazar Wolf on his marriage proposal and Jente's recommendation. But she loves the poor tailor Mottel Kamzoil, to whom she secretly got engaged more than a year ago. Due to his poverty, Mottel hesitates to ask Tevje for his daughter's hand, even if she urges him more and more urgently. Ever since the matchmaker visited her mother, she has been certain that she intends to engage her to someone else in the near future.

There is a threat of expulsion and a pogrom by the Russians, but Tevje keeps his courage and humor.

Tevje's second eldest daughter, Hodel, has feelings for the Jewish student Perchik from Kiev , whom she knows as a tutor, and is seduced by his innocent, unconventional manner to break with tradition: They dance.

Meanwhile, Tevje struggles with his eldest daughters' marriage wish, weighs up the pros and cons in subtle monologues and agrees. While the newly engaged couple are still happy and Mottel is singing about the miracle that has happened, Tevje is frightened: How should he explain to his gold that their daughter is going to marry a poor tailor instead of the wealthy Lazar Wolf? Fortunately, after 25 years, he knows his wife well and comes up with a plan to convince her of Mottels suitability. The following night he simulates a (nightmare) dream that he tells her about when she wakes up. He says that while he was asleep, Grandmother Zeitel, who had already died, appeared to him. This would have repeatedly and firmly touted Mottel Kamzoil as a bridegroom for the young Zeitel. In addition, Lazar Wolf's first (also deceased) wife, Fruma-Sarah, would have announced her murderous revenge if Zeitel dared to marry her Lazar. After some back and forth, Golde is ultimately convinced that Mottel is the best groom for her daughter. The marriage is decided. At the wedding ceremony, the parents of the newlyweds remember how the years come and go. Then, at the wedding celebration, Perchik succeeds in dragging the guests away in the dance, which means another break with their tradition. The Imperial Russian Army suddenly appears and demonstrates its power on behalf of the Tsar. Tables are knocked over, wedding guests injured. Tevje regrets this dowry for his daughter's wedding, but still maintains his courage and humor. Hodel and Perchik now confess their marriage plans to him and promise Tevje's approval after the unconventional marriage of their older sister. But her father struggles again because of the tradition, weighs up the pros and cons in subtle monologues and finally agrees. Today are different times, completely different times. Confused by the great importance of love for children - a word that he never illuminated in the faithful fulfillment of his conjugal duties - he invites his golds to ponder how she feels for him and whether this is love. She realizes that after 25 years of life together it must be love. In the shtetl the news spreads that Perchik was wrongly arrested by the Russians, condemned and exiled to Siberia . With a heavy heart Tevje lets his second daughter Hodel go, who wants to be with her fiancé during this difficult time.

When Tevje learns that his third oldest daughter Chava has secretly married the young Russian and Christian Fedja against his express will, his heart tears. He violates them. A restrictive decree from St. Petersburg and administrative pressure lead to the forced sale of all houses in the shtetl. All Jews have to leave Anatevka within three days. There was mass emigration to the USA and, in this politically tense situation, Tevje's reconciliation with Chava, who moved to Krakow with Fedja. A fiddler is playing on the roof.

Musically, the musical presents itself in various facets: exuberant dance music as in "Zum Wohl!", Touching moments of inwardness as in "Kleiner Spatz, kleine Chavaleh", ritual music, melodramas, etc. The relatively large orchestra enables a mixture of very different timbres: the classic Broadway sound is served by songs like “Jente, o Jente” or “Now I have what I want”. There are echoes of Jewish music in the numbers of the older generation, e.g. For example, in Tevjes “If I were once rich”, where coloraturas are meaningless syllables that refer to Hasidic music.

The libretto is based on Scholem Alejchem's short story Tevye, the milkman (1916). The original title Fiddler on the Roof (A Fiddler on the Roof) refers to the composition "The Geiger" (1912/1913) by the French painter of Polish-Jewish origin Marc Chagall . In Chagall's hometown of Vitebsk , the violinist played at the junctures of life (birth, marriage, death): For Chagall he was the embodiment of the artist, his existence and way of life. The violinist is one of the motifs that accompanied Chagall's entire oeuvre. In 1912/13 this motif became the eponymous figure and the focus of a picture composition. The figure of the Parisian "violinist" is shown considerably larger than the houses and the church that surround him like a wreath; and his face is green, like that of the violinist in the mural "Music" that Marc Chagall painted in 1920.

The special thing about this musical is the fine line between fun and deadly seriousness as well as the intertwining of private history and political background. For many, the quality of the musical lies in the good balance of both aspects and in how the tragic events are dealt with: It is not the suffering of the Jewish population that is shown, but their love of life and their will to survive. So the end does not hit the viewer when he sees how much the Jewish population suffers, but when HE suffers, because the ease has disappeared, when he feels what loss it is that these people, whom he in their idiosyncrasies about the Evening so fondly, are no longer in Anatevka.

After the pogroms in the Pale of Settlement , but especially after the extermination of Polish Jews by German National Socialism and the persecution of Jews under Stalin , Scholem Alejchem's series of stories Tewje, der Milchmann (1916) became the moral image of the Eastern Jewish shtetl .

Because of the strangeness of this lost world and because of the tragic aspects in the stories, these actually seemed extremely unsuitable for a musical. The Broadway musical, most recently characterized by pieces like My Fair Lady or Hello Dolly! , was in deep crisis in the first half of the 1960s. It was precisely this situation that prompted Joseph Stein to try a serious subject. He had written musical textbooks since the mid-1950s and would later write the textbook on Zorba . In an author couple with broadway experience, the songwriter Sheldon Harnick and the composer Jerry Bock , he found like-minded colleagues. Bock even studied the Yiddish musicians' klezmer music and didn't care what Broadway "asked" for. Harold Prince , producer of West Side Story (1957) and Cabaret (1966), took over production; Direction and choreography were given to a famous choreographer of Eastern Jewish descent who had the idea for the West Side Story at the time: Jerome Robbins .

At the world premiere under the title Fiddler on the Roof on September 22, 1964 at the Imperial Theater ( New York ) with Zero Mostel as Tevje, the audience was not only enthusiastic, but also alienated - some found out about the Eastern Jewish world and pogroms for the first time . Only one critic gave unanimous applause. But soon it “rained” prices on the piece and the actors - no other musical could combine so many.

After the world premiere and a dozen other performances at New York's Imperial Theater, the production moved to the neighboring Majestic Theater in 1967 and to The Broadway Theater in 1970 . In eight years it was the first Broadway musical to use up seven leading actors and to have 3,242 performances. This was a new record.

It was premiered in Europe on December 21, 1966 in the Netherlands under the modified title Anatevka . Only a month later, on February 16, 1967, the British premiere followed at Her Majesty's Theater in London with Chaim Topol as Tevje. The musical was a great success in both countries. For the German premiere, the title was changed again to Anatevka , the book by Joseph Stein and the lyrics by Sheldon Harnick were translated into German by Rolf Merz and Gerhard Merz-Hagen and, compared to the British premiere, it was almost a year to the day later, on February 1, 1968 in the Hamburg Operettenhaus , the German-speaking audience was heard for the first time. Shmuel Rodensky became famous as the incarnation of Tevje. The musical had become such a crowd-puller that the Parisian Théâtre Marigny followed suit a year later with the French premiere under the title Un violon sur le toit (A fiddler on the roof). Ivan Rebroff made his debut in the role of Tevje .

In the GDR , the musical was only allowed to be played at the Komische Oper Berlin . There it came out in Walter Felsenstein's legendary production on January 23, 1971. It saw more than 500 performances there, was seen by more than half a million people and was only canceled in the summer of 1988. Most recently, the production by Ewa Teilmans at the Aachen Theater in 2016, whose stage design by the Cologne set designer Andreas Becker made direct references to the refugee situation and the fighting over Aleppo, attracted attention .

Finally, in 1971, the Canadian director Norman Jewison filmed the musical under the title Fiddler on the Roof with Chaim Topol in the leading role. His film was nominated for an Oscar in eight categories in 1972 and won three Oscars, see Anatevka (film) . The musical was an experiment to counter the stereotypical shows with something new; "Anatevka" is still one of the most popular musicals to this day.

The Broadway production won nine Tony Awards in 1965 in the following categories: