The Risshō Ankokuron , classified as one of the national treasures of Japan and kept in Hokekyō-ji , Chiba, Japan

Under Nichiren Buddhism ( Japanese 日 蓮 系 諸 宗派 , Nichiren-kei shoshūha ) one understands the different schools of Buddhism , which refer to the monk and scholar Nichiren (1222-1282), who lived in Japan in the 13th century. These schools form part of the so-called Hokke-shū (lotus school).

Nisshō Gohonzon, original Nichiren -Gohonzon from November 1280. Also known as Denpō Gohonzon, this was inscribed by Nichiren for his pupil Nisshō and dedicated to him. The Gohonzon is located in the Kyō'ō zan Myōhōkke-ji temple, founded by Nisshō, Mishima City, Shizuoka Prefecture, Japan. It is not identical to the so-called Shutei Gohonzon of the Nichiren Shū, but comes from the same year.

For Nichiren, the Lotus Sutra , to which all Nichiren schools still refer to today, was the focus of Buddhist teaching and practice. According to Nichiren revealed Shakyamuni -Buddha the fact in this sutra that all people the Buddha nature inherent and enlightenment in the present existence is possible. This was in contrast to the widespread teaching of Amida Buddhism, which focused on rebirth in the “pure land” and was more oriented towards the hereafter. Nichiren set further priorities with the recitation of the mantra Namu Myōhō Renge Kyō (worship of the sutra of the lotus flower of the wonderful Dharma). 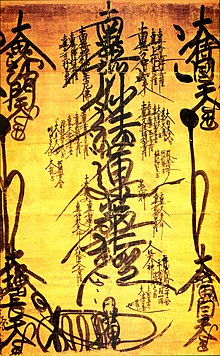 The Shutei Gohonzon (or Rinmetsudōji Gohonzon) of which copies are given to the followers of the Nichiren Shū. This is the Gohonzon inscribed by Nichiren himself from March 1280. The original is said to have been placed on Nichiren's deathbed in the house of the Ikegami family (today Ikegami Honmon-ji ) and is kept in Kamakura, in the Chōkōzan Myōhōn-ji.

In Nichiren Buddhism, the Gohonzon as a mandala represents one of the three areas of worship (also known as "the three great secret dharmas ") of his teaching. The other two are the daimoku or Odaimoku " Namu Myōhō Renge Kyō " (a mantra) and the place (Kaidan), on which the Gohonzon is inscribed or where Namu Myōhō Renge Kyō is recited. Some Nichiren schools (e.g. the Nichiren Shōshū) see a central temple as a Kaidan, some also see the country of Japan as a whole.

The Nichiren Gohonzon is usually a calligraphic mandala, in the center of which Namu Myōhō Renge Kyō is written, surrounded by Buddhas, deities, demons and spirits, which represent their own life and thus represent Buddhahood as a whole. In addition, the arrangement of the individual elements on the Gohonzon symbolizes the so-called "ceremony in the air". The Gohonzon can, depending on the school, also be represented with the help of statues. In this metaphorical ceremony Shakaymuni Buddha proclaims the Lotus Sutra, the correctness of which is confirmed by the beings represented. The believer should therefore see himself as a participant in this ceremony. In the various Nichiren schools, however, there are different understandings of the role that the believer should be given as a participant in this metaphorical ceremony.

To this day there are still some Gohonzons made by Nichiren himself. Depending on the Nichiren School, copies of it are given to the believers, or master copies are made by priests on which copies are based for the believers. Thus, the Gohonzon represents the religious object or focus of worship for believers in Nichiren Buddhism. Most Nichiren schools, however, have in common that it is not the object itself, but what it is supposed to represent, that is worshiped.

Criticism of the state and established Buddhist schools

Nichiren, who was already a controversial figure during his lifetime and who criticized the relations between the then predominant Buddhist schools and the state, subsequently became the leading figure in a large number of Buddhist schools in Japan. His criticism was directed primarily against Zen Buddhism, Nembutsu and the schools of Shingon and Ritsu Buddhism, which enjoyed great popularity at court and among the people of 13th century Japan.

Nichiren, who himself was a priest of Tendai Buddhism, saw the reasons for Japan's predicament (wars with the Mongols , famines and natural disasters had weakened the country) in the fact that the government followed the Buddhist teachings mentioned above. In his opinion, these Buddhist schools deviated from the original teaching of Mahayana Buddhism. He also defended himself against the increasing influence of esoteric teachings in Tendai Buddhism. For this criticism, which he formulated in numerous writings such as the Risshō Ankoku Ron ( 立正 安 国 論 , translated: "About the pacification of the country through the establishment of the true (right) law"), he was sent into exile several times. According to legend, his execution was prevented by the appearance of a comet, which caused the executioner to drop his sword in shock and the soldiers present to flee.

Nichiren schools as such did not form until after Nichiren's death, because although there is evidence that he himself did not found his own school, he had entrusted six of his closest students and priests with passing on his teachings. These were: Nisshō , Nichirō , Nikkō , Nikō , Nichiji , and Nitchō . From these, after Nichiren's death, Nichiji set out to spread the Nichiren's teachings on the Asian mainland. However, he never returned from this undertaking.

Already in the 14th century there were first divisions within Nichiren Buddhism. A distinction is made between the Itchi line and Shoretsu line:

Although the various Nichiren temples were still loosely in contact with one another, the debate over the Itchi and Shoretsu questions forced the scholars of Nichiren Buddhism to take a stand.

During the 14th and 15th centuries, Nichiren Buddhist following grew steadily. In Japan entire localities converted to Nichiren Buddhism and in Kyōto only the temples of Zen outnumbered those of the Nichiren Buddhists. Even if the Nichiren temples were independent of each other, they met in a committee to solve common problems. Based on the teachings of Nichiren, the relationship between Nichiren followers and the state, as well as with other Buddhist schools that had the favor of the state on their side, remained problematic. It was above all the followers of the Fuju-Fuse who made this aspect of Nichiren's teachings an elementary part of their practice. Because of this, they mostly held their devotions in secret, and the persecution of Fuju-Fuse followers culminated in the execution and banishment of some of their members in 1668.

The majority of the "official" Nichiren temples were forced into a registration system during the Edo period , with the help of which the spread of Christianity should also be contained. In this Danka system , Buddhist temples were not only a place of learning and religious practice, but also closely integrated into an official administrative system. On the one hand, this system also narrowed down every missionary activity of the various Buddhist schools, on the other hand, however, the temples also received a steady income.

During the Meiji Restoration , some forces in the country, the Haibutsu kishaku movement, stepped up their efforts to completely ban Buddhism from Japan. Buddhist temples, like the temples of Nichiren Buddhism, were now forced to focus on funeral ceremonies and ceremonies in remembrance of the deceased. On the other hand, the state supported the development and promotion of the so-called State Shinto (see also Shinbutsu-Bunri and Shinbutsu-Shūgō ). This repressive policy was only relaxed towards the end of the Meiji period.

Although many traditional schools of Nichiren Buddhism refer to the founding date of their respective main temple as the founding year (Nichiren-shū the year 1281, Nichiren-Shōshū the year 1288 and Kempon Hokke-shū the year 1384), they were established as official Buddhist schools only from the late 19th and early 20th centuries, another wave of "mergers" followed in the 1950s.

What is interesting here is the split with regard to the Itchi and Shoretsu questions. This is one of the reasons for the clear separation in Nichiren-shū and Nichiren-Shōshū, another reason is the alleged succession disputes after Nichiren's death. In 1488, the Taiseki-ji priest Nikkyō discovered documents which were supposed to prove that Nichiren had designated his student Nikkō as his sole successor before his death or that he was granted a special position among the students of Nichichren. The discovered originals are believed to have been lost, but it is claimed that “real” copies are in the Taiseki-ji's possession. Other Nichiren schools consider these documents to be forgeries. Especially with regard to the Ikegami Honmon-ji , where Nikkō was also buried, the documents at the time of their "discovery" possibly served to underline the supposedly outstanding position of the Taiseki-ji temple within the Fuji lineage. In the further course of history, however, the later Nichiren-Shoshu mainly based its claim to orthodoxy on these documents, among other things. It is true that towards the end of the 19th century the Nikkō temples made efforts to unite into one school, the Kommon-ha . The Taiseki-ji temple, including the temples under it, eluded these attempts to unite the Nikkō temples around 1900 and officially called itself from 1913 Nichiren-Shōshū - in German the "True Nichiren School".

In some sources, even within Nichiren Buddhism, today's Nichiren Shōshū is also referred to as the Fuji school , which is historically only partially correct. At the time of its official founding, the Nichiren-shōshū comprised only the Taiseki-ji temple and a few smaller temples, which were formally subordinate to the Taiseki-ji.

Some Nikkō temples, which are thus ascribed to the historical Fuji school, such as the Ikegami Honmon-ji , Koizumi Kuon-ji and Izu Jitsujo-ji , joined the Nichiren-shū in the course of their history, which in turn was founded by Nichiren himself Kuon-ji as their main temple. The Hota Myohon-ji is now an independent temple. The Nishiyama Honmon-ji is the main temple of the Honmon Shoshū and the Kyoto Yobo-ji is now the main temple of the Nichiren Honshū . Today's Nichiren Shōshū is thus not identical to the historical Fuji lineage or Fuji school.

Nichiren Buddhism has often been associated with Japanese nationalism ( Nichirenism ) and religious intolerance. On the one hand because Nichiren laid the foundation stone for a Buddhist school that apparently did not trace its roots back to a previous school on the Asian mainland, but this can be called into question by the connection to Tendai Buddhism. In addition, Nichiren Buddhism has always had a rather ambivalent relationship to the state in its history. Noteworthy are the events that became known as the incident on May 15 and at the center of which stood a priest, albeit a self-appointed priest of Nichiren Buddhism. An example of this is also the preacher and founder of the Kokuchūkai , Tanaka Chigaku . Also Tsunesaburō Makiguchi took before founding his own lay organization Soka Gakkai of, lectures Chigakus part. As a follower of Nichiren Buddhism, however, Chigaku also campaigned for support for the Kokutai idea.

On the other hand, these accusations also emerged against the more recent Nichiren movements of the 20th century. Especially in the Nichiren-shōshū, and the Sōka Gakkai that emerged from it, Nichiren is revered as Buddha. The idea of ​​a Japanese Buddha could serve as an explanation for these allegations.

Today there are around 40 different Buddhist schools, organizations and groups that refer to Nichiren. The most popular are listed in alphabetical order:

Schools of Nichiren Buddhism and their main temples

Organizations and movements based on Nichiren Buddhism