The following non-Chinese texts are known: 1) Complete: in Nepali , after the 8th century, 2) Fragments of Central Asian texts (5th to 7th centuries): a) From Kashgar (= "Petrofsky's" text), b) Fragments from Khotan , c) the Khadalik text; 3) The Gilgit text from Kashmir contains about ¾ of the entire work.

Most of the later comments and translations (also into modern languages) are based on the later Chinese translation. In this version, the Lotus Sutra is the basis of the Chinese Tiantai zong and the Japanese Tendai-shū , as well as all schools of Nichiren Buddhism , but is also particularly valued in Zen and the schools of the Pure Land . Sometimes the Lotus Sutra, especially in connection with the Tendai-shū, is also referred to as Ichijōkyō (一 乗 経 'Sutra of the one vehicle ').

In contrast to previous teachings of the Buddha , as described in the Pali Canon , it does not focus on the pursuit of holiness ( arhatships ) and liberation of the mind from all attachments, which leads to "ultimate extinction" in nirvana , but strives the redemption of men without exception, which starts with the individual. This requires “ skillful means ” ( upaya kaushalya), as described in the 2nd chapter and in the well-known parables and parables of the “burning house”, the “prodigal son”, the “plants”, the “hidden jewel”, from the "poisoned sons" and the "dragon princess" are formulated. The Lotos Sutra expresses the chance of every person to determine their own life and fate themselves and to steer them on the path of " freedom from suffering ".

The Lotus Sutra in its current form consists of 28 chapters, the first 14 of which deal with the earthly apparition of Buddha Shakyamuni . Chapter 1 contains a late introduction that aims to connect the first two parts. Chapters 2 to 9 are the original sections and are also coherent. Chapters 10 to 21 (Japanese 如 来 神力 品 , Nyorai jinriki hon ) - without 18 (Japanese 随喜 功 徳 品 , Zuiki kudoku hon ) - were added by a group of authors, with Chapter 10 (Japanese 法師 品 , Hosshi hon ) the merit of sutracopying is particularly emphasized. They are understood as the "law of appearance" and contain the teaching on the organization of the universe, human life and human relationships based on the experience of Shakyamuni. Accordingly, every living being has the opportunity to understand the ultimate truth. The possibility of attaining Buddhahood is also explained. The wisdom of the Buddha is represented as the main element of enlightenment . In this part the “human” Buddha ( Nirmanakaya ) confronts us , as the Theravada also knows him, whereby some “dogmas of Theravada ” are questioned here - even the “bad guys” can reach salvation through Buddha's infinite compassion, like the Arch opponent of the Buddha Devadatta .

In the other chapters, which are understood as the "law of origin", it is shown that the Buddha has taught people since time immemorial and that he is the fundamental principle that determines the appearances of the universe and that has existed from the beginning of the universe . The Buddha appears here as the embodiment of universal and general truth, as the ruler of the space-time continuum ( Sambhogakaya ). This transcendent Buddha (the Buddha of the Mahayana) is considered to be the embodiment of the cosmic order or Dharma, the earthly embodiment of which serves to help all suffering beings. The Buddha as a cosmic principle ( Dharmakaya ) is called the "original Buddha". Chapters 23-28 contain specific instructions such as: B. Chapter 23 the doctrine of the Medicine King (Japanese 薬 王 菩薩 , Yakuo Bosatsu ) and Chapter 24 the 16 kinds of the sammai des Myō-on-Bosatsu . In the 25th chapter (Japanese 観 世 音 菩薩 普 門 品 , Kanzeon bosatsu fumon bon ) the 33 transformations of Kannon d. i. Avalōkiteshvaras and the miraculous powers of this Bodhisattva explains in detail why this chapter is commonly referred to as the Kannon Sutra and is often considered an independent script. Chapter 26, Darani -hon ( 陀羅尼品 ), the spread of the Sutra and the recitation of various deals with the merit Dharanis . In the 27th chapter (Japanese 妙 荘 厳 王 本事 品 , Myō shōgon ō honji hon ) the conversion of a king by his sons is described.

In China there is also a 29th chapter Miaofa lianhuajing du liang tiandi pin di ershijiu that covers the spread of the lotus in heaven and on earth.

There are slightly different versions in the numbering of the chapters.

Women in the Lotus Sutra 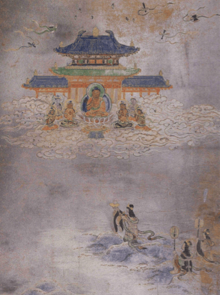 The daughter of the Dragon King offers the Buddha her priceless jewel. After that she turns into a man and immediately attains the highest enlightenment of a Buddha. Sutra illustration from the Heike Nokyo, twelfth century.

The sutra is based on a strict cosmology and doctrine of salvation. Thus it is possible for a woman to attain Buddhahood through the transformation of a rebirth as a man. In detail it says:

Sariputra: A woman's body is filthy (by defilement) and is not a vessel of the law. How are you able to (dragon girl) attain the highest enlightenment? […] Furthermore, there are five obstacles for a woman because of her body: 1) She does not achieve to become a Brahmā-Heaven-King, 2) Not Indra, 3) Not King of the Māras, 4) Not turning a wheel and 5) not Buddha. Dragon girl: you should now see with your unearthly power that I am becoming even faster than (this) Buddha . The following also applies:

If after the extinction […] a woman hears this text, practices according to this sermon and thus ends her life, she will be reborn on the jewel seat in a lotus flower. She (who has been transformed into a man) will no longer be beset by covetousness, nor by anger and folly.