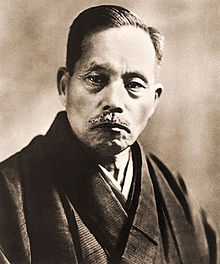 Makiguchi Tsunesaburō, founder and first president of the Soka Gakkai

Adopted by his uncle's family, Zendayu Makiguchi, Tsunesaburō moved to Japan's northernmost island, Hokkaidō , at the age of 14 . He graduated from a school in Sapporo, today's Hokkaidō College of Education . He got his first job as an assistant teacher at a primary school affiliated with his alma mater . A year after graduating, he married Kuma, the second daughter of Kumataro Makiguchi. He had eight children with her, four of his children died between 1924–1932. Later he taught as a high school teacher and worked as a boarding school director. After moving to the capital Tokyo, he worked from 1913 to 1932 as the principal of six different elementary schools.

During these years Makiguchi developed numerous reflections on the relationship between life and upbringing and formulated his theory of the creation of values, individual happiness and the prosperity of society.

He published his first book A Geography of Human Life in 1903. In it he developed unique and progressive theses on the relationship between individual life and geographical home. Among other things, he reflects his conviction that all people are connected to one another.

From 1930 he published the four volumes Soka Kyoikugaku Taikei (system of value-creating education) within five years . Based on his longstanding experience as an educator, these publications illustrate his astute observations and visionary approaches to reforming the Japanese educational system.

An example of his proposals is the creation of an educational system that includes a partnership between school, family and community, each of which takes responsibility for a specific part of the educational task. In his approach, a young person would spend half a day in school and the second half of the day in teaching or other work activities at home or in society. These activities are based on the predisposition and individual needs of the young person. Makiguchi hoped that this teaching approach would bring about a fundamental change from a bored, apathetic student to a self-determined and motivated student.

The theory and practice of value-creating education, which is aimed at anchoring the highest appreciation for life in the individual student, also aroused the interest of educators outside of Japan. The Soka Kyoikugaku Taikei has now been translated into English, Portuguese, French and Vietnamese.

After his return to Tokyo in 1916, he attended the lectures of the nationalist Tanaka Chigaku , who in turn founded the Kokuchūkai . Although it cannot be assumed that Makiguchi followed the nationalist content of the Kokuchūkai, it is assumed that their organizational structure, in addition to the reference to Nichiren Buddhism , could later have served him as a template for founding his own lay organization.

In 1928 he joined the Nichiren Shōshū together with his friend and student Jōsei Toda . He developed the basis for transforming Buddhism from what he thought was a theory that is remote from the world to a philosophy of life suitable for everyday life. This moved him on November 18, 1930 to found the Soka Kyoiku Gakkai (Value Creation Education Society). The Soka Gakkai, the predecessor community of today's Soka Gakkai International (SGI), was not formally founded until 1937.

On July 6, 1943, Makiguchi, along with Josei Toda, was arrested by the Special Unit of the Higher Police Department for violating the Law on the Maintenance of Public Security and Lese Majesty . He died on November 18, 1944 as a result of more than one year of solitary confinement and malnutrition in Sugamo Prison and was buried at Taiseki-ji .

There are, however, also critical voices with regard to Makiguchi's fundamental stance with regard to the military government of the time and, in particular, its expansion policy . The core of this criticism is the question of whether and to what extent Makiguchi's attitude was motivated much more religiously than politically.