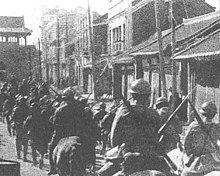 The Mukden incident was a bomb attack by Japanese officers on September 18, 1931 in Manchuria . It is considered the prelude to the Manchurian crisis between Japan and China .

After having won Korea as an area of ​​influence in the First Sino-Japanese War (1894/95), Japan became interested in Manchuria, which is rich in raw materials. However, this was occupied by the Russian Empire until 1900 . As a result, tensions arose between Russia and Japan, which, after the Japanese ambassador in 1903 demanded the withdrawal of Russian troops from Manchuria and recognition of Japanese interests in Korea, culminated in the Russo-Japanese War in 1904 . Japan won the war in 1905 and Russia had to withdraw from Manchuria, which was returned to China.

However, Japan secured great influence and built the South Manchurian Railway , which brought raw materials from Manchuria to Korea and shipped them from there to Japan. The Kwantung Army was stationed in Manchuria by Japan to protect the railway line .

As early as June 4, 1928, expansionist Japanese officers carried out a bomb attack on the Chinese ruler in Manchuria , Marshal Zhang Zuolin , who was killed in the process. The officers had hoped that chaos would break out in Manchuria, which would have prompted Japan to intervene in Manchuria. The situation remained calm, however, and Zhang Zuolin's successor, Zhang Xueliang , received Japanese support as long as he defended the de facto autonomy of Manchuria against the influence of the Kuomintang . On December 29, 1928, the leader of Manchuria declared his loyalty to the national Chinese government.

The Chinese tried to fight the economic and political influence of Japan in Manchuria through open competition. For example, railway lines were built that ran parallel to Japanese ones. Tensions between Japan and China intensified in the early autumn of 1931 after a Japanese spy was murdered and clashes between Chinese and Koreans, who were Japanese citizens after the annexation of Korea by Japan, broke out. In addition, many Japanese believed that further expansion during the economic crisis in the late 1920s and early 1930s would be a way out.

On September 18, 1931 at 10 p.m. two officers of the Kwantung Army (one of whom was probably the spy and later commander of the 14th Division , Doihara Kenji ) carried out an explosive attack on the South Manchurian Railway near the city of Mukden (Shenyang) . The explosion was followed by a gun battle between Japanese and Chinese.

The Chinese were blamed for the attack and it served as a pretext for further dispatching Japanese troops to Manchuria. Without having received the order from Tokyo, the Japanese troops attacked the Chinese garrison in Mukden and captured the city.

As a result of the Mukden incident, Manchuria was occupied by Japanese troops and the Japanese satellite state of Manchukuo was founded in March 1932 . In the Japanese parliament, the procedure was viewed critically, but since some critics were murdered or their voices were suppressed, there was no parliamentary intervention.

At a suggestion from Japan, the Lytton Commission (named after its chairman, Victor Bulwer-Lytton, 2nd Earl of Lytton ) was set up by the League of Nations to investigate the incident. She should have full freedom of movement in Manchuria, but was not authorized to issue instructions to the Japanese and Chinese troops in this region.

The Mukden incident marked the beginning of Japan's military expansion, which led to the outbreak of the Second Sino-Japanese War and thus the Second World War in Asia.

In the Yasukuni Shrine , the Chinese troops are still reported as the perpetrators.

Hergé takes up this incident in the Tintin comic The Blue Lotos . In this adventure, which appeared in the Belgian magazine Le Petit Vingtième from August 9, 1934 to October 17, 1935, Japanese agents blow up a railroad track and blame “Chinese bandits”. Japan then invades Manchuria "to protect the Chinese people".

The blue lotus contains a clearly anti-imperialist message and was contrary to the prevailing opinion in the West. When it appeared, it received severe criticism from various quarters and provoked protests from Japanese diplomats at the Belgian Foreign Ministry.

Because of the position in the Blue Lotos in favor of the Chinese people, Hergé was invited to the Republic of China by Song Meiling , Chiang Kai-shek's wife , in 1939 . However, the trip could not be carried out because of the impending war.