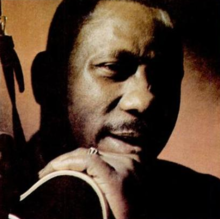 John Leslie "Wes" Montgomery (born March 6, 1923 in Indianapolis , Indiana ; † June 15, 1968 ibid) was an American jazz guitarist who, with his thumb-struck octave chains and melodious runs, is one of the most influential jazz guitarists to this day is.

Sections of the career

Wes Montgomery's career can be roughly divided into three phases: After his club appearances in his hometown, he published mostly virtuoso jazz recordings in small cast on various labels - especially on Riverside - from the late 1950s to the mid-1960s . From 1964 he was under contract with Verve , where he recorded some very popular records, often with orchestral arrangements by Oliver Nelson and Don Sebesky . The artistic quality of these recordings was very different, so that they are still controversial among music critics and jazz fans. In 1967 he switched to the pop label A&M , where he decided on a formula of easy listening, which many felt was shallow . Wes Montgomery died in 1968, a few days after attending the Berkeley Jazz Festival, of a heart attack at his Indianapolis home.

Wes Montgomery was self-taught : he first heard Charlie Christian's records when he was nineteen , bought a guitar, and began copying the solos. With his brothers Monk and Buddy he played in a factory during the day and in clubs in the evening. His professional career began when he played for Lionel Hampton from 1948 to 1950 . Tired of the constant touring stress, he returned to Indianapolis for family reasons, worked in the factory again and performed with his own band in the evenings. Between 1957 and 1959 he occasionally traveled to San Francisco , where his brothers celebrated success as The Mastersounds and he participated in their record sessions. These early recordings later appeared on Pacific Records .

In 1959, Cannonball Adderley heard him play at a club in Indianapolis and got him a record deal with Riverside Records. He recorded his album The Poll Winners with Wes . In the same year Wes' first album for Riverside was written, accompanied by Melvin Rhyne , organ, and Paul Parker, drums. In January 1960 he recorded what is arguably his best album, The Incredible Jazz Guitar of Wes Montgomery , accompanied by Tommy Flanagan , Percy and Albert Heath . This was followed by recordings with Cannonball and Nat Adderley , Harold Land , Milt Jackson and live performances with John Coltrane . During this most creative phase of his work, his albums So Much Guitar (1961) and Full House (1962) with Johnny Griffin and the trio of Wynton Kelly , with whom he also appeared live, as well as with his brothers Monk and Buddy as The Montgomery Brothers . On the later Riverside albums like Guitar On the Go or Fusion! Wes combined "the rhythm and energy of rock with jazz harmonies".

After 1964, when Riverside Records was abandoned by Orrin Keepnews , Wes Montgomery was under contract with Verve Records . In 1965 he toured Europe for the first time, performing at Ronnie Scott’s jazz club in London and playing with Johnny Griffin and Harold Mabern in Paris. On the first Verve album, its producer Creed Taylor Wes as a soloist in a big band framework with accompanists such as Jerome Richardson , Jimmy Cleveland , Urbie Green , Quentin Jackson or Clark Terry ; afterwards a series of seven albums with small group, big band and string line-up was created in close succession, on which the guitarist was accompanied by the orchestras of Oliver Nelson , Claus Ogerman or Don Sebesky . Their arrangements, anticipating smooth jazz , created a very successful pop jazz from instrumental versions of popular pop hits such as California Dreamin ' , Golden Earrings or Goin' Out of My Head , which was awarded a Grammy . In this way Wes Montgomery became "a prime example of the marketing process to which so many jazz musicians are subjected." Creed Taylor produced it solely from the point of view of saleability and gave it - which, as the critic Gary Giddins remarked, would have been the least - " not even allowed to play the music that was really close to his heart on every third or fourth record. "In 1962, Wes said in a Newsweek interview:" I know the melody, you know it too. Why should I play it? "And towards the end of his life he said:" I'm depressed about my game ... "

Alongside Charlie Christian, Montgomery is considered the most influential American jazz guitarist. He developed an idiosyncratic playing technique in which he struck the strings using the single-note technique with his thumb instead of an opening pick, creating a very soft sound. He played quick strokes in a row from his arm, alternating strokes from his wrist by moving. His octave technique (adopted by Django Reinhardt ), which is still often imitated today , was particularly characteristic . Two notes are played at the same time, while the string in between is muted with the left hand. Since the middle of the three fretted strings is also struck, the result is a more percussive sound than with other octave techniques, which, however, does not sound too hard when the thumb is struck. He also used a double octave technique in which the same melody is played two octaves apart on the 1st and 6th strings. In addition, Montgomery often played extended block chord solos at the highest level. With chord substitutions that formed the basis of both his solo playing and chord work, Montgomery sounded very modern for the time. So he often played the corresponding major 7 chord a minor third higher using minor chords, or the minor seventh chord a fourth lower using dominant seventh chords. Using such chord techniques, he emphasized the higher intervals of the underlying harmonies (7, 9, 11, 13), which is now also known as the " upper structure ". Montgomery also used combinations of single-note and chord techniques that give the impression of two guitarists playing.

His colleague Jim Hall expressed his admiration as follows: “I spent a whole afternoon in San Francisco trying to get his thumb in a car door.” Guitarist Carlos Santana saw Wes Montgomery on TV in 1967 at the Grammy Awards and was delighted: “He had a very unusual guitar sound, like a deep, fatherly voice. It was like patting me on the head and saying, 'Everything will be fine' ”.

As a co-leader or sideman