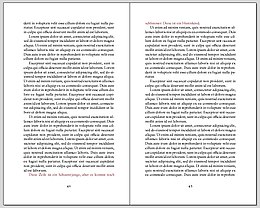 Below left a shoemaker boy , above right a whore child

With whore child (also: "widow") and shoemaker boy (also: "orphan") are two different but related types of typographical errors that disrupt the reading rhythm and are unaesthetic.

Whore child
as occasionally bastard, in 1900 abortion , since the 1980s rather widow to English widow called. This is how the last line of a paragraph is called if it is also the first of a new page or column . It is so called because it has lost its “origin” or its “partner”, i.e. the context in which it is related.
Cobbler boy
More contemporary named as orphan or foundling , to the English word orphan . This is the name given to a line of a new paragraph at the end of the page or column, which is continued on the next page - which dares to go to the previous page "cheekily like a shoemaker's boy".

Widows are in brief as serious technical mistakes, especially when they get to the back of the sheet. Then the book opened there begins with a sentence fragment that is completely out of context, so that the context cannot be established without turning back. Thereby affecting them both the flow of reading as well as the aesthetics of the type area strong. The Schusterjunge is paid against the bastard as a less serious error because it lies at least in the reading direction and bottom of the page, and falls only visually especially when heels with feed to be set.

The corresponding convention from typesetting technology and letterpress printing applies as the rule of whores children , that the last line of a paragraph must never be at the beginning of a book page, so that the appearance of the page does not suffer. The shoemaker boy rule applies analogously, based on the first line of a paragraph. Depending on the sentence type, only a single-line sentence error is prohibited according to these two rules. However, two or three lines to the beginning or end of a page "orphaned" work, such as when the paragraphs with leading are set. Therefore, these rules are specifically adapted to the typeface and typesetting.

Both errors are most serious when they only affect a few or even only a single word or only a single syllable. This is also caught by the general rules for line breaks (minimum number of characters / words after a line break). But this rule alone cannot prevent whores and shoemakers.

The following mottos serve as an aid to differentiating between these two typographical errors :

Before this rule was introduced, it was customary to consistently place the first word on the following back page, right-justified below the last line, and the last word on the front page, left-justified above the first line, so that, especially when reading aloud , you can "take" the context in your mind and could adjust the intonation before and after turning the page. This custom has been lost in the recent modern times. In times of type set only coaster with a trained eye could avoid such typographical errors by early when creating the page the line break of the surrounding text, as well as walking distance by word space , locks and leading adapting (word, letter and line spacing) so that the end Type area was preserved.

The desktop publishing software (DTP) takes on these tasks, the most commonly used term for the whore child and cobbler boy problem is sales control . Most layout programs and word processors offer this as standard. Such programs are in the menu system

With LaTeX the parameters \widowpenaltyand are to be \clubpenaltyinserted and in the web typography it can be determined by means of the CSS properties orphansand widowshow many lines of the paragraph must be at the end or beginning of the page (i.e. before or after the page break). This also applies to print versions of websites.

If these sentence problems cannot be solved automatically, the editor or author in the proofreading department will change the length of the corresponding text paragraphs by separating, deleting or adding so that these sentence errors no longer occur. This deep intervention in the typesetting is particularly critical in the case of texts with many short paragraphs, as whole series of whores' children and cobbler boys can form, which appear in a new form with each adaptation. Because in electronic typesetting subtleties such as line spacing and blocking variations are only common in high-quality typesetting programs, in low-end DTP the rule of whores and shoemakers must typically be chosen more comprehensively than a typesetter or professional algorithm. On the other hand, rules that are chosen too generously can lead to unsightly accumulations of exaggerated spaces between words, above or below, especially in justified .