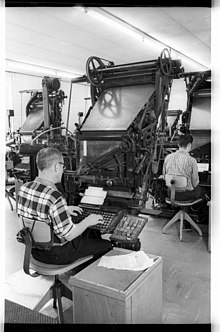 Typesetter in the print shop of the Kieler Nachrichten (1966)

A sentence is used in a printer , a publisher or similar. the work step that uses a technical process to create a printable form from a template (text, graphics, images, etc.) . Also, the product of the setting process itself is "set" as a "set", the activity as that used for writing as a typeface called.

The sentence with movable (metal) letters was reinvented in Europe in 1440 by Johannes Gutenberg , after it was already known in Korea 200 years earlier , but was hardly used.

There were various methods for the typesetter to generate the sentence:

The oldest method of typesetting is lead type . Until the 1970s, it was the dominant typesetting method.

Until well into the 19th century, typesetters performed metal typesetting exclusively by hand. In the case of hand typesetting, the individual lines of writing were composed of individual letters made of a lead alloy . There have been unsuccessful attempts to increase the speed of work using so-called logotypes . Syllables or whole words were cast together on one type. You should reduce the number of steps.

The first patent for a setting machine was granted in 1822. Initially, an attempt was made to use the letters from hand typesetting in the machines. However, this method failed because the alloy of the types was too soft to machine. Afterwards, such machines were successful that used matrices to set lines of text and then re-cast them. Representatives of this genus were u. a. the typesetting machine makes Linotype , Monotype , Typograph .

This typesetting process was also called "cold" or "weightless" typesetting, because the print template was generated photomechanically or photoelectronically. In photo typesetting, rays from a light source fell through a character carrier. An optical system bundled these so that the writing appeared on a light-sensitive film or paper in the desired size. The first photo typesetting machine was installed in Germany in 1959.

There were three generations of photo typesetting machines: The first were based on the earlier lead typesetting machines, only the casting device had been replaced by an exposure chamber and the matrices now had transparent glass negatives of the writing instead of embossed indentations. An example is the monophoto or intertype photosetter . The second generation of machines consisted of independent new developments such as the Intertype Fotomatic or the Linofilm . The third generation of machines ( Digiset , Linotron) produced the characters electronically. The characters were stored electronically, a cathode ray tube or a laser transferred them to the photosensitive material. 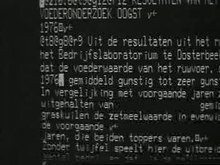 The majority of publications today are created on the computer and are divided into the areas of desktop publishing and structure typesetting.

In the last few decades, desktop publishing (DTP) - typesetting and pagination on the computer - introduced in 1985 has replaced the previous typesetting techniques and largely replaced them. Intermediate steps, such as subsequent upheaval or assembly into a page layout as they were needed in previous methods omitted. The new typesetting techniques of the computer enable more freedom of design than those of lead typesetting and higher productivity . The technical basis for this is provided by the image and instruction information stored in digital form in typefaces , the so-called fonts . Nowadays, in professional applications, page layouts are saved as computer data. One speaks of "preprint page layouts". This means that the focus of professional typesetters has shifted to layouting in prepress : the typesetter becomes the “layouter”.

In contrast to desktop publishing, with structure set or work set, self-breaking continuous texts are created that usually contain no or only a few images. Structured data ( XML ) serve as the basis , which flow into a suitable typesetting system via a technical set of rules ( template ) and are automatically laid out. The compositional achievement lies in the design of the template. Depending on the configuration and use, TeX and LaTeX can be viewed both as a structure set and as desktop publishing .