The Finno-Ugric languages (also Finno-Ugric or Ugric-Finnish languages) together with the Samoyed branch form the Uralic language family and are divided into two branches: the Finno-Permian and the Ugric branch. 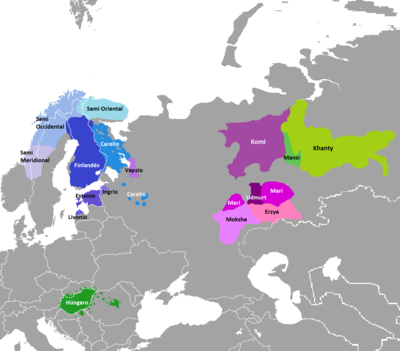 Distribution of the Finno-Ugric languages ​​in Eurasia

Similar to the Indo-European languages , today's Finno-Ugric languages ​​are the result of several language divisions and can be traced back to a hypothetical original language , the Ur-Finno-Ugric .

According to the traditional view, the original language split into the Finno-Permian and the Ugric branches during the first split. The Ugric language community split into the so-called Obugrian languages and the Ur-Hungarian, from which today's Hungarian emerged. In the Finno-Permian branch, first the Permian group, then the Volga- Finnish and finally the Baltic-Finnish group and the Sami formed .

There is no doubt that the Finno-Ugric peoples had early contact with the Indo-European language world, as can be demonstrated by numerous borrowings. Thus, the numeral 100 is in the Finnish SATA , in Mordovian Sada , in Mansi sad , in Hungarian Száz that when borrowing from Indo-Iranian applies (see FIG. Sanskrit SATAM , Avestan satəm '100'; related to Latin centum , see FIG. Kentum- and satellite languages ).

The Finno-Ugric languages ​​are classified as follows:

The Mordovian and Mari languages were previously classified under the Volga languages, but this classification is now being questioned as no common basic Volga Finnish language can be reconstructed. It is therefore more an area than a genetic classification.

In principle, there are several predominant characteristics, but they do not apply entirely to all languages. that is, there are always deviations from the majority. However, this does not mean that these languages ​​are not related to one another, but that certain grammatical functions have disappeared in some languages ​​(internal spontaneous development or external influence).

The following list is of a purely informative nature and does not provide evidence of a linguistic relationship. Comparative historical linguistics reconstructs words of common Finno-Ugric or Uralic origin. The linguistic relationship is considered to be proven by the quite extensive fund of basic words (which also relate to basic things in everyday life, e.g. body parts, animal names, plant names, weather, tools).

The Estonian philologist Mall Hellam mentions the following sentence, which is supposed to show the similarities between the languages:

The beginning of the Our Father in various Finno-Ugric languages

While the basic numerals from 1 to 6 are all Finno-Ugric, the numeral for 7 in both the Finnish and the Ugric languages ​​is a borrowing from Indo-European, cf. Old Indian sapta . The number word for 10 corresponded in the original language to the word for "number"; this is still preserved today in Sami, Mari and Mansish. The numerals das in Komi and Udmurt and tíz in Hungarian are borrowings from Iranian languages .