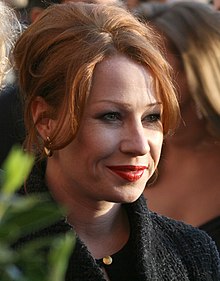 Birgit Minichmayr at the gala for the presentation of the Romy TV Prize in Vienna, 2012

Birgit Minichmayr (born April 3, 1977 in Linz , Upper Austria ) is an Austrian actress . In addition to various film engagements, she is currently a member of the ensemble of the Vienna Burgtheater .

The actress, who grew up in Pasching near Linz , was trained at the Max Reinhardt Seminar in Vienna after graduating from high school, among others, from Inge Konradi , Artak Grigorjan and Klaus Maria Brandauer , with whom she repeatedly works. She broke off her training in the seminar in the third year of study when she was engaged at the Burgtheater in Vienna. There she made her debut in 1999 as a prostitute in Schnitzler's drama Der Reigen . In 2004 Minichmayr played the leading role at the Ruhr Festival in Recklinghausen in Frank Castorf's production Gier nach Gold , which was co-produced with the Volksbühne on Rosa-Luxemburg-Platz in Berlin . After this collaboration with Castorf, she decided to go to the Volksbühne in Berlin. She was a member of the ensemble there from 2004 until she returned to the Burgtheater in 2007, where her first role was the fool in King Lear . In 2008 she embodied at the castle a. a. the devil and Lady Macbeth. From 2010 to 2012 she played the role of Buhlschaft at the Salzburg Festival alongside Nicholas Ofczarek as Jedermann . From October 2011 to 2016 she was a member of the ensemble of the Residenztheater in Munich, which Martin Kušej directed as artistic director. She then worked as a freelancer at the most important theaters in the German-speaking area. When Martin Kušej took over the management in the 2019/20 season, she returned to the Vienna Burgtheater as a permanent member of the ensemble.

At the 2001 Berlinale , Minichmayr was presented as one of the “ Shooting Stars ” of European film. In 2005 she starred in Tom Tykwer's film The Perfume - The Story of a Murderer , the film adaptation of the novel of the same name by Patrick Süskind , the mother of the main character. In 2009 she and Lars Eidinger appeared in Maren Ade's film All Others as unequal lovers, for which Minichmayr received the actor's award at the 59th Berlinale .

At the Berlinale 2012 she was a member of the jury for the Amnesty International Film Prize and starred alongside Jürgen Vogel in Matthias Glasner's competition film Gnade .

In 2015 she was appointed to the jury of the Zurich Film Festival for the competition category Focus on Switzerland, Germany, Austria . At the Locarno Festival 2017 she was a member of the jury headed by Olivier Assayas for the award of the Golden Leopard .

On the album In aller Stille der Toten Hosen she can be heard in the song Aufbaren in a duet with Campino . Together with Campino she wrote the lyrics of the song Tage wie This , which was the first single from the album Ballast der Republik .

Birgit Minichmayr lives in Vienna. She is married to a South Tyrolean entrepreneur and has been the mother of twin girls since January 2018. 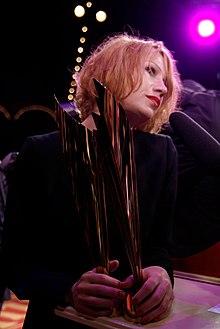