Daumier is a redirect to this article. Further meanings are listed under Daumier (disambiguation) .

Portrait of Honoré Daumier by Nadar

Honoré Daumier (born February 26, 1808 in Marseille , † February 10, 1879 in Valmondois , Val-d'Oise ) was a French painter , sculptor , graphic artist and caricaturist . He is an important representative of realism . His political and socially critical caricatures are significant. 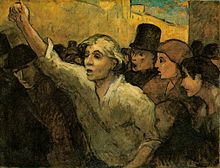 In the picture gallery

From 1831/32 Daumier produced lithographs for the satirical magazines La Caricature and Le Charivari . He modeled a large number of small portrait sculptures as templates for drawings by well-known contemporaries such as politicians or journalists, which appeared in La Caricature . For his exaggerated satirical designation of King Louis Philippe as Gargantua - a voracious eater and drunkard (fictional character by François Rabelais ) - he was sentenced to six months in prison in 1832. Daumier's painting became less well known, in which he also turned to literary subjects and the socially critical representation of the common people. From around 1848 he kept in close contact with the realistic school of Barbizon . Blinded in old age, he died impoverished. In 1880 his body was transferred to Paris and solemnly buried in the Père Lachaise cemetery.

Typical of Daumier's painting is a strong light-dark contrast and the use of a clearly emphasized graphic outline. The scope of his graphic work includes more than 4000 lithographs and over 1000 woodcuts. In the characteristic drawing of ridiculous and tragic personality profiles, his caricatures achieve timeless generality.

Characterization of the cartoons

Daumier first made a name for himself through the series "Robert Macaire" published by him in Le Charivari . His portrayals deal with the comical and ridiculous scenes and incidents of the day, the foolishness of strange people, the downside of big things, foolishness. Daumier knew how to portray the comic side of common bourgeois life and the ridiculous of individual nature sharply and vigorously, even often brutally (e.g. in the figure of Ratapoil). Noteworthy in this regard are: "Les Bons bourgeois", "Pastorales", "Locataires et propriétaires", "Les papas", "Les beaux jours de la vie" and his "Représentants représentés", a collection of caricature portraits of around 100 representatives of the Constituent and legislative branches, as well as his “Idylles parlementaires”, masterpieces of political-satirical jokes that recall the best time of Greek comedy. The latter two are fruits of the 1848 revolution .

Daumier's caricatures also deal with the connection between the bourgeoisie and antiquity : While in France classicism had been a program of cultural rule since Louis XIV , it was first adopted by the revolutionary leaders after the French Revolution, but then by the real winners of the revolution, the bourgeoisie, utilized. This appropriation of ancient iconography by the bourgeoisie makes Daumier ridiculous: he pulls the false masks off the petty bourgeoisie and shows them in pathetic everyday scenes. So he created a “mythology of everyday life” in small studies of the physiognomy and character of his fellow human beings. In his caricature, The Smile of the Augurs , he ties in with a saying by Cato , who said that the augurs should smile when they meet because they knew too much. Daumier on this: The industrial barons know just as much - but they don't smile when they meet.

Two world wars resulted in a large number of Daumier's paintings being lost or stolen.

Catalog raisonné of all Daumier paintings

Since April 2011 there has been internet access to all known oil paintings by Daumier with in-depth research results, provenance information, exhibitions, publications and numerous search functions.

Ratapoil in the Städel in Frankfurt am Main