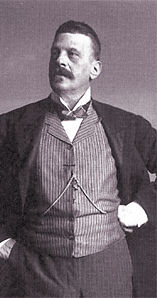 Karl Otto Clemens Wittgenstein (born April 8, 1847 in Gohlis near Leipzig ; † January 20, 1913 in Vienna ) was one of the most successful entrepreneurs of the late Danube Monarchy , was a characteristic representative of the so-called " Gründerzeit generation " and u. a. Father of the philosopher Ludwig Wittgenstein and the pianist Paul Wittgenstein .

Karl came from an early assimilated German-Jewish family Meyer-Wittgenstein , whose roots lie in the small town of Laasphe in the Wittgensteiner Land . His grandfather was the estate manager Moses Meyer. He had worked for the Counts of Sayn-Wittgenstein-Hohenstein and had moved to Korbach before 1803 , where he ran a wool wholesaler.

Karl Wittgenstein (second from left) with his parents, brothers and sisters. The photo was taken on the occasion of his parents' silver wedding anniversary.

In 1847 Karl came as the sixth of eleven children of Hermann Christian and his wife Fanny, nee. Figdor, in Gohlis to the world. Three years later the family moved to Vösendorf ( Mödling district ) in Lower Austria , where his four youngest siblings were born. The family moved to Vienna in 1860, where the father worked in real estate trading.

At the age of eleven, Karl Wittgenstein tried to run away from home for the first time; at seventeen he left high school after being threatened with expulsion: in an essay he had questioned the immortality of the soul. In 1865 he actually ran away from home: with a passport that he had bought from an impoverished student in Vienna, he traveled to America , allegedly only having a violin with him. In New York he hired himself as a waiter and bar musician, as a teacher of mathematics, German, Latin, Greek as well as music, violin and horn and finally as a helmsman on a canal boat. He left the family without news for almost a year and only returned to Vienna two years later.

In Vienna, Karl Wittgenstein dropped out of engineering at the Technical University after just one year . Several short intermediate positions followed in different professions in different places in Austria-Hungary . It was only through mediation and support from Paul Kupelwieser (brother of Wittgenstein's brother-in-law Karl Kupelwieser ) that Wittgenstein began his steep career in the iron and steel industry as a technical draftsman at the "Teplitz rolling mills" in northern Bohemia. Wittgenstein was elected to the board of directors as early as 1876 and appointed director in 1877. Only a few years later he was also their main shareholder. Under Wittgenstein's leadership, the Teplitz rolling mills then took over the “Böhmische Montangesellschaft” in 1884. The Teplické válcovny a besemerovny (Teplické válcovny a besemerovny) was founded in Zuckmantel (now Pozorka ) in 1872 for the production of heavy plate. The Bessemer steel production process was introduced as the first rolling mill in Bohemia . In 1907 workers and production were relocated to Kladno .

In 1886 Karl Wittgenstein brought the Teplitz rolling mills into the Prague iron industry company in exchange for shares , thereby establishing the first Austrian iron cartel . In 1887 he bought the “St. Egydyer Eisen- und Stahl-Industrie-Gesellschaft ”; In 1890 he concentrated the Upper Styrian scythe industry with the "United Scythe Works" in Judenburg . In 1889 Karl Wittgenstein finally founded the Poldihütte in Kladno as a private company. He named the company after his wife Leopoldine.

As the first entrepreneur in the Danube Monarchy , Karl Wittgenstein operated a consistent modernization of production technology and a rationalization of operational processes in the companies he controlled . He paid no particular attention to the social consequences of his actions. That is why he was soon referred to - with a thoroughly critical undertone - as an "American in Austria". Wittgenstein also pursued a policy of " vertical integration ". In other words, he tried to get the entire production process of iron and steel extraction in hand, starting with coal and iron ore mines, through iron and steel works to further processing and sales. Even banks to finance his projects and settlement companies to build workers' apartments were ultimately part of Wittgenstein's sphere of influence.

Karl Wittgenstein reached the climax of his influence in 1897 with the acquisition of the majority of shares in the Österreichisch-Alpinen Montangesellschaft , in which, as before in other companies, he consistently trimmed production processes for efficiency and closed surplus plants. This provoked violent protests both from the workers affected by Wittgenstein's measures and from his customers, who saw themselves increasingly being overreached by his iron cartel. Finally, even the Austrian government felt compelled to officially investigate Wittgenstein's business practices.

In view of the uproar, Karl Wittgenstein withdrew from all his posts in 1898 - only 52 years old - and went on a trip around the world with his wife. He also sold his entire industrial estate, but in 1899 he bought Böhler AG's 5,000- hectare forest property . He transferred the proceeds to Switzerland, Holland and the USA, where he invested it in real estate, stocks and bonds. Therefore, his vast fortune survived both the First and Second World Wars and the Great Depression . During the hyperinflation that followed the First World War , assets could even be increased considerably through a clever investment policy.

Karl Wittgenstein and his wife Leopoldine

On February 14, 1874, Karl married Leopoldine Kallmus (born March 14, 1850 in Vienna, † June 3, 1926 in Vienna), a talented pianist who came from a Jewish family in Prague. The couple moved to Teplitz for a year , then to a villa in the Meidling district of Vienna . Then the family moved into the Wittgenstein Palace , which was built by Friedrich Schachner in the Alleegasse (now Argentinierstrasse) in 1871–73 . The family's country or hunting lodge ( Hochreith ), which was completed in 1905/06 in Hohenberg as a conversion and extension, as well as the two houses, forest office and forest house built in 1900 in the local association were planned and furnished by Josef Hoffmann (" Wiener Werkstätte ").

Karl and Leopoldine Wittgenstein's children were:

As in his companies, Karl Wittgenstein also acted in the family environment in the manner of an authoritarian patriarch who consistently overwhelmed and humiliated his children.

Unlike other successful entrepreneurs and bankers of Jewish origin, Karl Wittgenstein refused to be elevated to the nobility . He was a Wittgenstein, none of the usual “ Ringstrasse barons” wanted to be. He also flirted with a possibly illegitimate descent from the German aristocracy - from the princely families of the Waldeck-Pyrmont or Sayn-Wittgenstein . In any case, an old Viennese joke differentiated the "haben-Wittgenstein" from the "Sayn-Wittgenstein".

Karl Wittgenstein was an important and generous patron and promoter of contemporary art, among other things he made a significant contribution to the construction of the Vienna Secession , and he was also a promoter of contemporary artists, especially the Vienna Secessionists. Musicians such as Johannes Brahms , Gustav Mahler , Bruno Walter and Pablo Casals were often guests at Palais Wittgenstein.

His extensive art collection included old masters and tapestries in particular the artists of the Vienna Secession such as Gustav Klimt's portrait of Margarethe Stonborough-Wittgenstein and international impressionists such as Claude Monet's portrait of Eugénie Graff (1819-1891). Among the sculptures in the collection, the bust of Beethoven that Max Klinger created, as well as the two large sculptures Minotaur and "Fight, a man wrestling with a bear" by Josef Müllner should be mentioned. 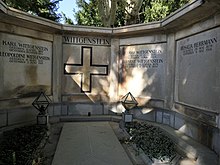 Around 1909, Wittgenstein found a new formation on the palate . As part of the treatment carried out by Emil Theodor Kocher in Bern , twelve severe operations followed - which ultimately could not prevent the disease from returning .

Wittgenstein spent the summer and autumn of 1912 in his Hochreith country house . On December 25th of that year he returned to Vienna from a stay on the French Riviera , where he never left his hospital room.

The consecration took place on January 22nd, 1913 in the Lutheran City Church . Then the burial took place in the family crypt, now dedicated to honor, in the Vienna Central Cemetery (Group 32B, No. 24).