In addition, the hilltop villages Hoheleye , Langewiese , Neuastenberg and Mollseifen northeast of Bad Berleburg, which became districts of Winterberg (Hochsauerlandkreis) during the regional reform , are also included, even though they are now often included in the Sauerland , also because of the outsourcing .

The Wittgensteiner Land is clearly divided into a northern part with Erndtebrück and Berleburg in the catchment area of ​​the Obereder and a southern part with Laasphe in the catchment area of ​​the Oberlahn by the watershed between Eder and Lahn, which reaches over 680 m at Ebschloh and Bärenkopf . Since the Eder, which runs parallel to the north, flows around 90 m higher than the Lahn, the lowest point in Wittgensteiner Land is at around 290  m above sea level. NN at the outlet of the Lahn below Niederlaasphe ( Oberes Lahntal ). The highest point of the old circle was the Gerkenstein (792.7 m) on the watershed of the Odeborn to the Lenne in the extreme northeast. In today's district area, the Albrechtsberg (772.1 m) further south-west , the base of the Rothaar ridge on the watershed between Lenne and Eder, is the highest mountain , but not the highest point : This is located in the extreme northeast and also on the district boundary over 788 m above sea level south-southwest of the Wallershöhe in the Ziegenhelle massif ( coordinates ). The highest elevation of the southern part that drains towards the Lahn is the compass ( 694  m ) in the extreme south. 51.11648 8.531386

In the 4th / 5th Supplied to the handbook of the natural spatial structure of Germany , a 468.8 km² large natural spatial main unit Wittgensteiner Land was described in 1957 , which had already been mapped in 1954. In addition to the Wittgenstein heartland, this also included parts of the Hessian hinterland . Conversely, peripheral areas of the historic Wittgensteiner Land such as the Upper Lahn Valley near Laasphe and parts of the Rothaargebirge higher up , including the hilltop villages southwest of the Kahler Asten , were left out.

With the mapping from 1960 and the single sheets 125 Marburg (1960), 111 Arolsen (1963), 110 Arnsberg (1969) and 124 Siegen (1972), however, the main unit was given up again and most of the landscapes previously summarized under Wittgensteiner Land became the Rothaargebirge ( Main unit 333), to a lesser extent also assigned to the Ostsauerland mountain range (322). The following main landscapes remained:

Hilly landscape of the Wittgenstein Chamber; striking mountains of the Rothaargebirge can be seen in the background, including Kahler Asten and Ziegenhelle .

The Wittgenstein Chamber is a largely cleared high trough that follows the valleys of the Odeborn (from Girkhausen ) and the Eder (from Berghausen ) to their confluence in Raumland in the northeast . From Berghausen up the Eder to the west, this cleared meadow landscape extends to Aue and from there northwards along the Kappel to Wingeshausen ; However, this landscape is assigned to the Auer Ederbergland on the Arnsberg sheet.

The south of the chamber is occupied by the hilly country between Raumland and Erndtebrück, where the Eder is reached again. The wooded ridges between Aue (N), Berghausen (O) and Birkelbach (SW), which reach 643  m on the shrub north of Birkelbach , as well as the Eder-Engtal between Röspe and Aue, which, together with elevations to the left of the Eder, are left out Form Auer Ederbergland.

The Wittgensteiner Land is divided in the middle across the west-east direction by the Stünzel ridge , which stretches along the Rhine-Weser watershed from Ebschloh ( 686.3  m ) over the Bärenkopf ( 680  m ) to the Sackpfeife ( 674  m ) . This ridge forms, apart from Ebschloh (already counted as part of the Ederkopf-Lahnkopf-Ridge ) and the bagpipe, the north of the Südwittgensteiner Bergland . Strictly speaking, there is no really geomorphologically clear western boundary of the natural area of ​​the bagpipe, unless, unlike sheet 125 Marburg, the western boundary and notch (geography) | notch of the actual sackpipe back - which on the other hand only separated a ridge from the adjacent ones. The border between the Wittgensteiner Land and the Hessian hinterland runs here only in terms of culture .

The southern parts of the Südwittgensteiner Bergland that drains from the spring or from the right to the Lahn are largely uninhabited and forested. An exception is the Feuding Basin with Feudingen and some hamlets northwest of the village, which is clearly sunk. The Hainberg , the only notable inner elevation, remains at 528.1 m far behind the edge heights (in the northwest  about the Ebschloh).

The north east of the historic Wittgensteiner Land is occupied by the Hinterland Ederbergland on both sides of the Eder between Dotzlar and Beddelhausen , which, as the name suggests, continues into the Hessian hinterland. 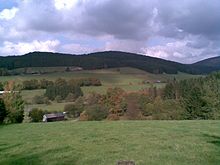 The Wittgensteiner Land has an extremely harsh climate, in which the average temperature drops continuously from east to west, while the amount of precipitation increases significantly with the associated altitude, as the following, no longer completely current (1950s) list of mean annual precipitation shows:

The 90  m higher elevation of the Eder does not have a recognizable effect, but the height of the surrounding mountains, especially those to the west, does.

The settlement of the Wittgensteiner Land took place gradually, starting from Hesse, from east to west, initially in the two main valleys, i.e. those of Eder and Lahn, which form the only gates into the landscape. Up to the year 800 the main valleys were developed up to the meridian of Raumland , then higher parts of the main valleys and the side valleys followed. The higher regions were not settled until around 1700.

In the area of ​​today's city of Bad Berleburg , local archaeologists were able to use excavation finds to prove that more than 150 settlement sites were first settled in the Celtic, i.e. pre-Christian times (from around 700 BC). Wall castles are known from this time, which were built by the Celts on steep mountain tops. The castles are located near the present-day villages of Aue, Dotzlar , Hesselbach , Wemlighausen and above Bad Laasphe .

Archaeological finds that indicate prehistoric settlement also exist in the area of ​​the Bad Laaspher district of Banfe . Mention should be made here of the stone ax from the "quail", a piece of forest in Banfe, as well as pot and bowl fragments from the "Auerbach", which flows through Banfe.

Resettlement in the Carolingian and Ottonian times

The first documented mentions of the towns of Laasphe, Arfeld , Raumland and Hesselbach are from the years 800 and 802 AD. At that time, a Carolingian border mark against the Saxon areas in the north was created here with a comparatively loose settlement.

In the late 9th and early 10th centuries, the Wittgensteiner Land belonged to the Franconian Hessengau , a domain of the Conradin family . According to name-based research, the main settlement of the state began around 900, when new farms and settlements were created in the valley areas that were first accessible under the Conradins from Hesse. The name ending in -hausen (e.g. Diedenshausen, Bernshausen) is typical for this phase . In the following century the higher altitudes were also settled, so that around 1000 around two thirds of today's villages were available as places of residence. From the turn of the millennium, as everywhere in Europe, the population increased roughly threefold in the following three centuries. This led to the formation of real villages with up to 10 or 20 farmsteads at the older settlement areas and to clearing and the creation of new settlements at relatively unfavorable altitudes.

The name Wittgenstein (Widechinstein) was first mentioned in a document in 1174, when Count Werner I called himself after a castle that had been built with this name shortly before over Laasphe . At that time the area was a north-western part of the much larger county “Stiffe” (“Stift”), in which members of the family of the Counts of Reichenbach-Ziegenhain ruled.

Creation of the County of Wittgenstein

Wittgenstein Castle , eponymous ancestral seat of the state as well as the count and princely house

The grandchildren of Count Werner I von Battenberg and Wittgenstein shared their father's property. In 1238, Count Siegfried I received the land around the upper reaches of the Lahn and Eder rivers and was now called Siegfried von Wittgenstein. Thus began the story of an independent county of Wittgenstein, which until the dissolution of the Old Kingdom remained in the possession of the Counts from the Wittgenstein family and their successors from the Sponheim-Sayn family.

Below the Wittgenstein Castle , which gives it its name , Count Siegfried I founded the town of Laasphe around 1240/50 on the site of an older settlement from the Carolingian era. In 1258 a second city was founded north of the Eder, Berleburg, which was situated high above the Odeborn and protected from attacks by steep slopes leading to the Odeborn valley and the Berlebach. Siegfried I, together with monastery bailiff Adolf von Grafschaft , acquired the property rights to the mountain from the Grafschaft Benedictine monastery , which in 1322 became the sole property of Siegfried II von Wittgenstein .

The following counts ruled the county of Wittgenstein after the extinction of the Wittgensteiners in a male line in 1361:

In the late 15th century, the Count's House placed itself under the protection of the Landgraves of Hesse-Marburg in order to fend off attacks by other sovereigns, in particular the Archdiocese of Mainz . At the same time, however, the close contacts with the House of Nassau from the late Middle Ages were maintained . In 1605 it was divided into the now independent counties Sayn-Wittgenstein-Berleburg and Sayn-Wittgenstein-Wittgenstein .

Coat of arms of the Wittgenstein district

Shortly before the end of the Old Kingdom in 1806 the emperor loyal Count Christian Heinrich to have Sayn-Wittgenstein-Berleburg (1792) and Friedrich Karl to Sayn-Wittgenstein-Hohenstein (1801) of Emperor Franz II. In the Imperial Prince collected.

Both principalities were initially attached to the Grand Duchy of Hesse-Darmstadt in 1806 , but then handed over to Prussia by resolution of the Congress of Vienna in 1815 . Reunified, they formed the Wittgenstein district in the southeastern part of the Westphalia province from 1817 . The seat of the district was Berleburg .

The Wittgenstein Platt is of linguists for Hessian counted speaking countries. According to Möhn and Weiershausen, the dialect is divided into a northern and a southern language area, each of which is shaped by the influences of the neighboring regions of Westphalia or Hesse and Nassau.

Historically, there was a cultural connection to Upper Hesse and the Siegerland areas, and in some cases to the neighboring Sauerland areas. A connection to the historical landscape of Westphalia emerged in particular in the Wittgensteiner Höhendörfern, which today belongs to the Hochsauerlandkreis , as people from the neighboring Sauerland have settled there since it was founded by Count Casimir zu Sayn-Wittgenstein-Berleburg and brought their language, Catholic denomination and customs with them have spread.

The Wittgensteiner Land is characterized by medium-sized companies. Some international companies are based here. For example, the EJOT group of companies is based in Bad Berleburg . The Sonor company, founded in 1875, has been based in Aue since 1946 . The oldest local beer brewery is the Bosch brewery in Bad Laasphe, founded in 1705 .

An outstanding personality from the Wittgensteiner Land is the German composer and music teacher Friedrich Kiel (born October 8, 1821 in Puderbach ; † September 13, 1885 in Berlin ). He was one of the most respected composition teachers of his time and was one of the outstanding composers of the generation between Robert Schumann and Johannes Brahms . Kiel was buried in the Old Twelve Apostles Cemetery in Berlin-Schöneberg , but he found his final resting place on October 7, 1971 in his birthplace Puderbach.

The Austrian industrial and intellectual family Wittgenstein has its roots in the Wittgensteiner Land. She was originally an early assimilated Jewish family in Laasphe . One of the oldest well-known members of the family was the estate manager Moses Meyer, who worked for the Counts of Sayn-Wittgenstein-Hohenstein . Due to the regulation issued in the Kingdom of Westphalia in 1808 to adopt a surname within three months, Moses Meyer chose the origin-related surname Meyer-Wittgenstein. The most famous descendant of this family is the Austro-British philosopher Ludwig Wittgenstein .