Wittgensteiner Platt is one of the Hessian dialects in the larger family of Rhine Franconian languages .

It is spoken in the area of ​​the former Wittgenstein district ( vulgo Wittgenstein ). These include the cities of Bad Berleburg and Bad Laasphe as well as the municipality of Erndtebrück with a total of around 42,000 inhabitants. The Wittgenstein district was dissolved on January 1, 1975 and merged with the previous Siegen district, which has been called the Siegen-Wittgenstein district since 1984 . The language area also includes the so-called hill villages of the Altkreis, namely Langewiese , Neuastenberg , Mollseifen and Hoheleye with a total of around 880 inhabitants; at the same time they were assigned to the newly formed Hochsauerlandkreis and belong to the small town of Winterberg . 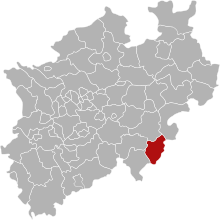 Location of the old district of Wittgenstein in the state of North Rhine-Westphalia, the extent of which roughly corresponds to the distribution area of ​​the Wittgensteiner Platt

The Wittgensteiner Platt can be assigned to a northern and a southern language area, areas that each have the influences of the neighboring regions of Westphalia, Hesse and Nassau. These two areas roughly coincide with the Wittgenstein territories of the Counts of Sayn-Wittgenstein-Berleburg and Sayn-Wittgenstein-Hohenstein, which existed from the 16th to the 19th century, and are essentially separated from each other by the watershed between Lahn and Eder. In dialect, the Höhendörfer, founded only in 1713, play a special role because they have a connection with the Low German-speaking area. As Möhn explains, some of the settlers came from the neighboring Sauerland region of Cologne (the “Kelschen”), were Catholic and spoke Low German dialect; some came from the south of the county, were reformed and spoke Central German (Wittgensteiner) dialect.

As a result of this development, Möhn points out that Wittgenstein thus became a section of the High German language area (shifting area), a northern part of Central Hesse, and stands out from the completely different Low German (no shift). This also deserves interest because a Wittgensteiner sees himself more as a Westphalian , occasionally also as a Sauerland .

With all written and spoken texts, it should always be remembered that there are differences from place to place in the small-scale linguistic landscape. The larger-scale difference between the north of the Eder and the south of the Lahn that was mentioned at the beginning can be demonstrated with the following:

In addition, there is no uniform orthography, so that there can be significant differences even with authors from the same place of origin.

As expected, the proverbs, standing idioms or sayings often borrow the symbolic process from rural life or nature. Karl Hartnack has shown that they “not only embody the expression itself, but also, according to its pace and tone, the way of life and expression of the residents”.

“Güd gefriehsteckt help the whole day, güd wärntet dos whole Jūhr, un güd bestott dos whole lion.” (A good breakfast helps for the whole day, a good harvest for the whole year, and a good marriage for the whole life.) - The proverb increases what is good, from a good breakfast to a good harvest to a good marriage. "Maare, dütt de Öje uf, bestōre äss kēn Pārekööf." (Girls, open your eyes, getting married is not buying a horse.) This is how one advises girls. “If everything is on fire, help kē extinguish it.” (If an old barn is on fire, extinguishing does not help.) - This assumption applies to elderly bride and groom.

“Vo anner Laire Haire äss güd Rimme schneire.” (One can easily cut straps from other people's skins.) - This is aimed at those who avail themselves at other people's expense. “Whoever is called Plügg ned Schärje wäll, dä mürren ē Amerika dänse.” (Those who don't want to push the plow here have to pull it in America.) - Those who seek to escape to the promised land cannot escape the hardships of life. "Anyone who hännerm Plügg stett here has to wuannerschter danse." (Whoever stands behind the plow has to pull it elsewhere.) - Anyone who sets the tone here, leads a comfortable life, runs the risk of having to bother others elsewhere . “Whoever was born in a jibb äss, kemmd be Läbdāg ē kēn Rock.” (Those who were born in a jacket will never wear a skirt in their entire life.) - Anyone born poor can try as hard as possible, they come to Nothing.

“Dos äss wie en Hoh uhne Kobb züm Krēh.” (It's like a rooster without a head to crow.) This is how you can mark a rather imperfect thing. “Dos hot da fox measured merrem tail.” (The fox measured that with its tail.) - Here we are talking about a rough estimate, depending on the situation, incorrect estimate, perhaps even with a cunning intention. “Ha lēd be eggs ned ē de nettle.” (He does not lay his eggs in the nettles.) - He knows how to protect his interests. “Dos äss dämm Hearsch ō d's horn.” (That is tied to the stag's horn.) - The funds for a hopeless cause are lost.

Of course, the Wittgensteiner also takes his punch lines from other areas of life. Two examples of this:

“Uff every Debbche basst e Deggelche.” (A lid fits on every potty.) - There is a solution for every question. "Klēne Debbcher hon hre." (Small potties also have ears.) - This is what they say when there are small children whose ears the conversation is not intended for.

On social occasions, people like to tell each other anecdotes that are amusing, accurate or deplorable from their circle of friends and relatives or about originals that are well known in the area; this is repeated and some stories survive generations in this way.

Since aiwi Hermann woar werra muul sträwe, su real steamy un duune heeme come, un Kathrinche liked om annere Morje know Kaffie. You took Hermann's ower watch from the wall, there was a train station ee the luggage storage and said: "If you know Kaffie krijjen, make sense of the ökeener hon". Saare, and fiehr med the Zuch nu Rommelaand uff de Grüwe. (Hermann from Aue came home drunk once again and his Kathrinchen didn't make him any coffee the next morning. Hermann took the stove pipe from the wall, handed it over to the luggage storage in the station and said: "If I don't get any coffee, I should He said that and took the train to Raumland to the mine. You have to know that Hermann had to get up every morning at four o'clock in order to be present at the Heßlar slate mine in Raumland in time for the start of the shift. Normally his wife Katharina got up to light the fire and to make him coffee.)

Insen Hermann leads morjens em dark and light merrem red num Bahnhoob. You hillen da Doafbullezisd o un saad: "Awwa Hermann, how can you da su without Lichd em dark fohre?" "Dū hostes ,behal dasch", saad da Hermann, dreggtem's Fohrrod ee de Haand un went weira. (Our Hermann rode his bike to the train station in the morning in the dark without lights. The village policeman stopped him and said: “Hermann, how can you drive in the dark without lights?” “There you have it, keep it,” said Hermann, gave him the bike and walked on.)

At Heina un at Minna uff'm Lennehob - dä lejjed weid döise - woar werra muul wos Kleenes okomme, 's fifth orra sächsde woarsch. Now, half a year old, Minna's finally: "We'd have to lose our awwa ö dööfe." "Äss güd!" And since Heiner pigg ee da basket with the jugs, dos Kleene took out and stobbde's a backpack. How huh with the Panna okãm, saad dä werra da Heiner: “Loss mech dos Kändche but emuul delight.” Since Heiner touched his rucksack rem un vodde very pale and unnervingly. “What is deer there, Heiner?” Frooden da Panna. "Jo weesde," insen Heiner woar richdisch valäje, "dos hie äss da Pütsch vom verijje Jūhr!" (At Heiner and Minna's on the Lindenhof - he is far out - something small had arrived again, it was the fifth or sixth. After six months, Minna finally said: “But now we should also have it baptized.” “It's good!” And Heiner reached into the basket with the children, took the little one out and stuffed her into a rucksack when he got to the priest he said to Heiner: "Let me see the child once." Heiner stirred his rucksack and turned pale and shaky. "What's the matter, Heiner?" asked the priest. "Yes, you know," our Heiner was very embarrassed , "This is the brat from last year.")

And about grandpa's talent to enrich the vocabulary, they say: “Insen Ubba dōt alsemūl sayings! Dū kām emūl da klēne Uwe med his four years unn Matschstiwwelscha hänne nē, un like da Ubba en sōg, sāre: 'Where do you wail dä Watz met his Solperfisse there? ”(Our grandfather said things from time to time! Little Uwe came along once his four years and mud boots in the back, and when Grandpa saw him, he said: 'What is the Watz - boar - doing here with his cured feet?')

Dieter Möhn explained that the theory of forms and syntax said the deviations from high-level language were small. In fact, Wittgensteiner Platt - spoken clearly - is relatively easy to understand for those used to the standard language compared to some other dialects, even when it comes to word formation, one ignores extreme examples such as the "solution" cited above. However, some peculiarities are not without interest.

If these peculiarities are transferred into standard or written language, this results in what Willi Schneider (1978) describes as "speech defects in the Wittgenstein dialect". In the past, it must have been upsetting to the Wittgenstein teachers that their students occasionally said:

However, this phenomenon seems to be common to all dialects. However, this is not, as the heading of Schneider's essay puts it, about errors in the dialect, but about the failure to incorporate dialectic peculiarities into the written language (which may not even be inappropriate in the spoken High German colloquial language).