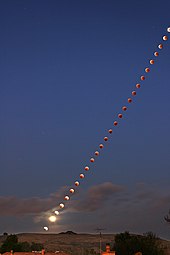 Multiple exposure of a lunar eclipse

The multiple exposure is a phenomenon in the photograph . In chemical photography it can happen that several images are exposed on the same point of the emulsion , so that the individual images are superimposed to form a common image. In digital photography , the image sensor is exposed several times before it is read out and deleted. This effect can be brought about consciously, but is usually undesirable.

There are three methods of multiple exposure:

When scanning slides, black and white film, and negative color film, multiple exposure can be used to produce high dynamic range (HDR) scans. The process called multi-exposure scans the original several times with different exposure intensities. The data are then calculated to form an image. In this way it is possible to achieve a significantly higher dynamic range, i.e. H. capture more details of the original.