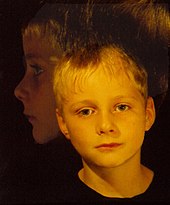 Double and multiple exposure is a technique from analog photography in which one image is exposed on top of the previous one. Several levels of reality are captured in one picture. Similar to long exposures , the individual exposures blur into one another. The motifs often become transparent.

Double exposures can be used to relate people and / or objects to one another. For example, two faces become one face, a person disappears into a tree, or a person meets himself. 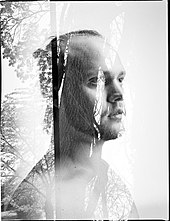 With double exposures, an image, i.e. a specific area of ​​the film, is exposed twice in succession. So it is photographed twice without moving the film further. To make this possible, there must be no mechanical coupling between the film transport and the cocking of the shutter ; this decoupling is not intended for every camera. If the background is the same for both exposures and is to be reproduced congruently, the camera should be placed on a tripod. Double and multiple exposures can also be performed with the self-timer or remote release without the help of others .

If the background is dark and the subject in the foreground is well lit, you get two clear images in one picture. If the background is lighter, it cannot be avoided that the motif becomes slightly to very transparent, but this can also be specifically incorporated into the image design. In this case, the exposure may also need to be corrected so that the image is not overexposed.

Instead of exposing the film twice in the camera, two negatives can be combined on one photo paper for the exposure . Both can either be exposed one after the other or placed together in the negative stage . This process is known as a sandwich .