This article describes the city in Arizona; for other meanings, see Tucson (disambiguation) .

Tucson [ ˈtuːsɑn ] is a city in the US state of Arizona . The city is the county seat of Pima County . The population is around 530,000 (2016 estimate, US Census Bureau ); More than 1 million people live in the metropolitan area of ​​Tucson. Tucson is the largest city in southern Arizona and the second largest in Arizona after Phoenix .

The name Tucson comes from the language of the Tohono-O'Odham Indians. Your name of the area, Chuk Shon , means "at the foot of the black mountain" (based on Sentinel Peak near downtown Tucson).

Tucson was already around 12,000 BC. Settled by Paleo-Indians. The remains of a village have been found near today's city center, which lived here around 1000 BC. Chr. Stood. Between 1200 BC The area around Tucson was used for agriculture in 150 BC and 150 AD. The city is one of the longest continuously populated places in the USA . The residents of that time built irrigation canals to cultivate the corn and bean fields. The Hohokam culture settled in this area between AD 600 and 1450 . The Mission San Xavier del Bac was founded near what is now Tucson in 1699 by the Italian Jesuit missionary Father Eusebio Francisco Kino . The city was finally founded on August 20, 1775 with the construction of a presidio (fortress) under the direction of Hugo O'Conor by the Spaniards. After Mexico gained independence from Spain in 1821, Tucson became part of Mexico. With the purchase of Gadsden in 1853, the city fell to the United States. From 1867 to 1877, Tucson was the capital of the Arizona Territory . The University of Arizona was founded here in 1885 . Many former soldiers settled here after World War II, and with the advent of air conditioning, more and more people moved to Tucson. The population grew from 8,000 (1880) to 120,000 (1950) and 220,000 (1960).

The closest major cities are Phoenix (Arizona) to the north, El Paso (Texas) to the east, the sister cities of Nogales (Arizona) and Nogales (Sonora) in the south, and San Diego ( California ) in the West.

Congress Street with US District Court

In addition to the University of Arizona, the city's most important employers are the county and city authorities, the electronics industry, the defense and aerospace industries, and the service and tourism sectors.

The largest private employers in Tucson include Raytheon Missile Systems, Texas Instruments , IBM , Intuit Inc., America Online , Universal Avionics , Misys Healthcare Systems and Bombardier . Since July 6, 2007 there is also a branch of the "Solon America Corporation". The company's stated goal is to transform the state of Arizona into the "Solar Valley" of the United States.

The 3.5 million tourists annually bring in income of about 2.2 billion US dollars.

Another important economic factor is the US Air Force's military airfield .

Tucson is connected to New Mexico or El Paso ( Texas ) in the east via the I-10 freeway and to Phoenix or Los Angeles and San Diego ( I-8 ) in the west . Interstate 19 leads south to Nogales , ( Arizona / Mexico ) or Hermosillo ( Sonora , Mexico).

The city has an international airport, Tucson International Airport , which is used by around 1.7 million passengers annually (2012).

There is also a train station that is served three times a week by the Amtrak Sunset Limited train going to New Orleans and Los Angeles .

In Tucson there was a historic streetcar, the Old Pueblo Trolley , which on weekends connected the University of Arizona campus with the 4th Avenue pubs.

In May 2006, the people of Tucson approved the city government's proposal to build a modern tram network. The new tram route runs for 6.3 kilometers from downtown via 4th Avenue and the university to the university hospital. Regular operations began on July 25, 2014. The operation of the historic Old Pueblo Trolley was discontinued with the construction of the new tram in October 2011 after more than 18 years. The operating company Old Pueblo Trolley, Inc. is negotiating with the city of Tucson about a possible parallel operation of historic vehicles with the new tram.

Downtown Tucson in the evening with University of Arizona center left 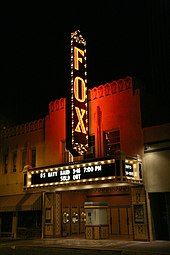 The Fox Tucson Theater is one of the city's 179 entries on the NRHP.

Sabino Canyon on the outskirts of Tucson

Tucson is home to the University of Arizona , the oldest and second largest university in Arizona . The university was founded in 1885 and today has about 37,000 students.

There is also the Pima Community College with around 75,000 students, which offers two-year courses.

There are three theaters, the Arizona Theater Company, the Invisible Theater, and the Gaslight Theater. Laff's Comedy Club is the only cabaret in town.

The most important museums in the city include the Arizona Historical Society, the Tucson Museum of Art with 6,000 exhibits from pre-Hispanic times, the University of Arizona Art Museum with works of art by u. a. Franz Kline , Jackson Pollock and Mark Rothko , the Center of Create Photography and the Museum of Contemporary Art.

Outside of town is the Arizona-Sonora Desert Museum , the Pima Air Museum, and the Titan Missile Museum.

The National Park Service lists 179 structures and sites for Tucson that are listed on the National Register of Historic Places (NRHP) (as of November 24, 2018).

One of the highlights of Tucson's annual calendar is the "Fiesta de los Vaqueros" (the celebration of the cowboys), also known as the Tucson Rodeo. Prize money of several hundred thousand euros will be awarded for the event, for which the conquerors fight in front of tens of thousands of visitors from all over the country every day. The Tucson Rodeo first took place in 1925 and is now considered one of the top competitions in professional rodeo.

The student nightlife mainly takes place in the bars on University Boulevard, right at the main entrance to the campus. Live music is also often played here. Tucson's pub mile is 4th Avenue, which is accessible from the university by tram. If you follow 4th Avenue towards the city center, you come to Congress Street, where there are other pubs and clubs, such as the Club Congress. Finer establishments can be found mainly in the foothills, for example in the La Encantada Shopping Mall.

There are numerous cinemas in the city that usually show blockbuster films. The Loft Cinema on the Speedway a few kilometers east of the university specializes in alternative and international films. An international film festival takes place every April.

Information on current events can be found in the free Tucson Weekly, which is available in most bars and restaurants.

Famous residents of the city