Anna herself the third

This article deals with the art historical topic.

Anna selbdritt describes in Christian iconography a representation of St. Anne with her daughter Maria and the baby Jesus . The image type is one of the devotional images that developed in the late Middle Ages and were particularly common and varied in Germany and the Netherlands, but also in Italy and Spain. The expression selbdritt is an old word for “as part of a group of three” or “as a three”. 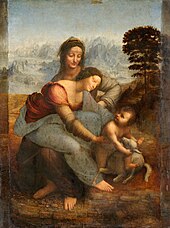 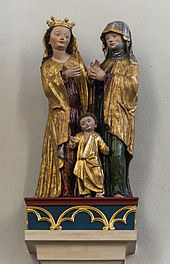 Anna selbdritt (around 1480) in the parish church of St. Anna in Pöggstall

The wall painting in the so-called three mothers niche from the 8th century in the church of Santa Maria Antiqua in the Roman Forum in Rome is the oldest known picture of Mary's mother . Shown are the Mother of God with the baby Jesus in a mandorla , on the left Elisabeth with the St. John boy and on the right St. Anna with her daughter Maria. From the middle of the 13th century, there are more and more examples of pictorial depictions of Anna-selbdritt, for example in the Nikolaikirche in Stralsund . Typical of these early pictures is the relatively small, girlish figure of the Virgin compared to Saint Anne. A particularly well-known painting is a depiction of Leonardo da Vinci , which was created between 1500 and 1510 during his stay in Florence . Beginning with Sigmund Freud , Leonardo da Vinci's Anna herself was repeatedly the starting point for psychological considerations.

There are very many sculptures , paintings and altarpieces of Anna herself in churches all over Europe. The motif can also be found on various coins and seals, the town of Annaberg-Buchholz in the Ore Mountains has an Anna selbdritt in its coat of arms . Occasionally the depiction was also made with Saint Joachim , Anna's husband, and the two men whom, according to tradition, she married one after the other after Joachim's death (and to whom she gave birth to a daughter, who was also called Maria), Cleophas and Salomas, and further kinship lines, such as Anna's sister Esmeria with her daughter Elisabeth and her son John the Baptist , expanded to the so-called holy clan .

Occasionally, Emerentia , Anna's mother, is added to the design of an Emerentia . There are examples of this type of image in Minden and Limburg Cathedral . In Dortmund (Cremer collection) there is a painting by the master from 1473: Saint Anna Selbdritt with many saints .

The image type of Anna herself is closely linked to the cult of Anne in the Middle Ages. However, since there are no biblical sources about the existence of Mary's parents, mother Anna and father Joachim, to whom Anna's mother later came with the name Emerentia , the artists referred to many topics of Mary's life , including Anna herself, the third apocryphal Gospels and the popular Legenda aurea of Jacobus de Voragine .

In the apocryphal Gospel of James , an elderly temple priest named Joachim is reported, who after a long marriage to his wife Anna was still childless and whose sacrifice in the temple had been rejected by his superior priest for this reason. Then an angel appeared to both Joachim and Anna who prophesied the birth of a daughter, Mary. The presentation of Mary in the temple , also known as the "Temple Walk of Mary", has also become a popular theme in Western art.

Many of the numerous brotherhoods , especially in Germany, chose Anna as their patron saint and donated chapels and altars, on which statues of Anna herself were often placed. An indication of the cult of Anne , which is widespread in Europe, is the large number of patron saints of St. Anne in Western, Central and Eastern Europe. The great role that the altars played there in popular piety is reflected in the large number of ex-voto panels and pictures attached .