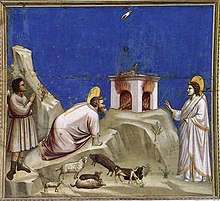 The Sacrifice of St. Joachim, cycle of frescoes by Giotto di Bondone in the Cappella degli Scrovegni in Padua 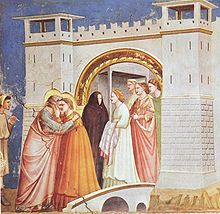 Meeting Joachim and Anna at the Golden Gate

The holy Joachim was according to several apocryphal gospels of the 2nd to the 6th century, the father of Mary and thus grandfather of Jesus Christ .

In the Catholic and Orthodox tradition, St. Joachim (Hebrew: Jojakim) is considered Anna's husband and the father of Mary, the mother of Jesus ; he is therefore referred to with the title "Ancestor of God". In the Koran it is called 'Imrān .

According to the teaching of the Roman Catholic Church, Mary was saved from original sin in the womb by God's plan of salvation . The Gospels do not specifically mention Mary's parents in the New Testament , but it is argued that the genealogy in Luke  3 is that of Mary rather than Joseph, which is why her father is referred to as Eli . Catholic and Orthodox theologians argue that “Eli” could be the short form of “Eliakim”, which means “Jojakim” or “Joachim”.

The story of Joachim and Anna is also told in the apocryphal protoevangelium of James . Joachim is described as a rich and pious man who regularly donates to the poor and the temple. However, since his wife is sterile, the high priest rejects Joachim and his victims; the childlessness of his wife is interpreted by them as a sign of divine resentment. Joachim then retreats into the desert, where he fasts and repents for 40 days. An angel appears to both Anna and Joachim and announces the birth of a child. Joachim returns to Jerusalem and hugs Anna in front of the entrance to the Jerusalem Temple, the "Golden Gate". The promised child Mary is born.

A cycle of legends by Joachim and Anna can also be found in the Legenda aurea . Representations of the hll. Joachim and Anna remained popular in Christian iconography . The feast day of St. Joachim used to be celebrated on August 16, in the Roman general calendar now together with that of St. Anne on July 26.

Joachim is the patron saint of fathers and grandfathers and the city of Adjuntas in Puerto Rico . His attributes are a shovel and sacrificial animals ( lamb or pigeon ). Often he is with St. Depicted Anna or the Virgin Mary.