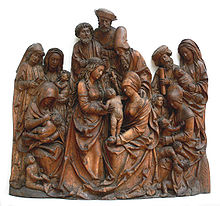 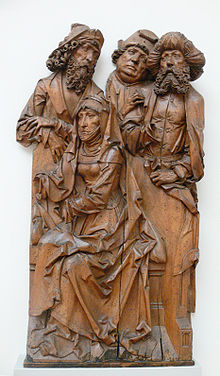 Some people of the holy clan are mentioned in the New Testament; others, including the parents of Mary , St. Anna and Joachim, in the Proto-Gospel of James , or they were handed down through the tradition of the Church. Among these traditions is the idea of ​​a so-called trinubium ("three-time marriage") of St. Anna : after the death of her first husband, Joachim , she is said to have entered into a second marriage with Cleopas. It is said of Cleopas that he was a brother of St. Joseph . After Cleopas' death, Anna married Salomas a third time. In each of these marriages, she gave birth to a daughter, whom she named Maria. To distinguish it, the second daughter was nicknamed Cleopas and the third was nicknamed Salome. This tradition is also reflected in an old song that is reproduced in the Legenda aurea of Jacobus de Voragine :

The tradition of the Trinubium was handed down in the 9th century by Haymo , the bishop of Halberstadt, and was also found in the 15th century in Schedel's world chronicle .

Husbands, daughters and sons-in-law and grandchildren are depicted around Saint Anne in the motif of the holy clan: Joachim, Cleopas, Salomas, Maria, Joseph, Maria Cleopas, Alphaeus, Maria Salome, Zebedaeus , Simon Zelotes , Judas Thaddäus , Jakobus der The younger ones , Joseph and the Zebedee sons James the Elder and John , a total of 17 people.

According to the Gospel of Luke , Mary went to visit her pregnant cousin Elizabeth . Elisabeth was married to Zacharias , both are parents of John the Baptist . There are further representations, for example in Schedel's World Chronicle of 1493, which include the parents of St. Anne and show 26 people in four generations, but in two pictures:

Altarpiece with a carved representation of the holy clan (1508), Langenzenn

The cult of Anne spread in Germany in the middle of the 15th century. Numerous Anne Brotherhoods and Anne Altars were founded. The motif of Anna herself third became very popular. The bourgeoisie had regained strength after the plague epidemics . The cohesion of a family was valued, and the Holy Family was particularly revered.

In addition, a fundamental interest of society in genealogical constructions can be observed in the late Middle Ages . At this time, one's own identity was often expressed by referring to family relationships; Noble houses, but also the bourgeois upper class, tried to research their ancestry.

Fresco of the holy clan in Loxstedt

The holy clan in Loxstedt with the index of those depicted

In the St. Marien Church in Loxstedt in the district of Cuxhaven there is a very well-preserved depiction of the holy clan. When it was founded in 1371, after the so-called “children's plague”, the church was initially a chapel. When this became a parish church in 1451, it was extended to the east by a choir , over which a holy clan was depicted.

In the middle there is a depiction of Anna the third of herself . The three husbands and son-in-law Josef stand around them. To the right, Maria Salome and Zebedee join with their two sons, to the left we see Maria Cleopas with Alphaeus and her four sons. The 17 people are divided into three groups in families; that makes the picture look very harmonious.

The following people can be seen from left to right: