Conrad Celtis (also Konrad Celtes , with the nickname Protucius ; born February 1, 1459 in Wipfeld am Main , south of Schweinfurt ; † February 4, 1508 in Vienna , buried in St. Stephen's Cathedral ) was a German humanist and poet.

The name Celtis is made Humanists Latinization of the surname Bickel or Pyckell , probably after the pimples of the winemaker . The nickname Protucius based on the Gräzisierung Protykos which refers to a similar tool reference: ancient Greek τύκος tykos ( "bit"), extended to the prefix προ- ( "upstream").

Born the son of a winemaker, the young Celtis probably went to school in Würzburg and then studied at the University of Cologne , where he obtained a bachelor's degree in the Artes liberales in 1479 and then devoted himself to theological studies without attaining a degree here. He criticized the training, as neither Latin grammar and rhetoric were taught nor mathematics and astronomy . In 1482 he went on an educational trip to Buda , where he made contact with the group of scholars around Matthias Corvinus .

In 1484 he went to the University of Heidelberg and resumed his Artes studies, with a focus on poetics and rhetoric. In doing so, he acquired rudimentary knowledge of Greek and Hebrew and was introduced to a group of humanists who, with the support of the Electoral Palatinate Chancellor and Bishop of Worms, Johann XX. von Dalberg in connection with the university and court. In Heidelberg from autumn 1484 until his early death the following year, Celtis became a student of the important Dutch humanist Rudolf Agricola , from whom he took important ideas for his later work. Here he probably got to know the connection between humanistic education and an interest in the visual arts, which later became characteristic of his collaboration with artists such as Albrecht Dürer . Agricola was also active as a musician and painter.

The Latinization of the name of Celtis had already taken place before, now he could also translate it into Greek, according to the tria nomina of the Romans . The words were extremely rare in both languages, that is, they were taught, with the extension of Greek to the pronounced “pre-chiseler” claiming to be a champion of Greek studies, which at least at this time was certainly exaggerated. In 1485 Celtis completed his master's degree in Heidelberg.

In 1486 Celtis undertook a second educational trip to Italy. He exchanged ideas with scholars such as Marsilius Ficinus , Philippus Beroaldus , Pomponius Laetus and Marcus Antonius Sabellicus and deepened his studies in Padua , Ferrara , Bologna , Florence , Venice and Rome .

In the spring of 1489 he traveled to Krakow via Dalmatia, Croatia and Hungary to study mathematics and astronomy at the university there . There he founded the Sodalitas Vistulana as the first of the scientific societies. In the meantime he went to Prussia and the Weichselland, before moving to Ingolstadt via stations in Prague and in 1491 in Nuremberg , where he took on an extraordinary professorship for rhetoric and poetics in 1491/92. At that time he also came into contact with Albrecht Dürer and the Nuremberg Circle of Humanists and began to include the visual arts in his projects.

In the winter of 1492 he took over the management of the cathedral school in Regensburg and in 1495/96 he was the teacher of the sons of Elector Philip of the Palatinate in Heidelberg .

Woodcut from the Amores of 1502

He spent the last decade of his life mainly in Vienna, where he was appointed "ordained lecturer" for rhetoric and poetics by King Maximilian I in 1497 .

On his initiative, a Collegium poetarum et mathematicorum was founded at the university , a humanistic institution with a total of four teachers: two for poetics and rhetoric and two for mathematical disciplines. This is where the combination of poetry and natural research sought by Celtis becomes visible. As a degree, the coronation as a poet ( laureatus pro poeta ) was planned. The founding charter written in the name of Maximilian I is dated Bolzano, October 31, 1501 . Celtis was supposed to be the superintendent, and it was opened on February 1, 1502. The earlier assumption that this college of poets ceased to exist with Celtis' death at the latest has now been refuted; it existed until around 1530.

His reputation as a scholar of his time allowed him to take part in the first baccalaureate doctorate at the newly founded University of Wittenberg , before he went to Bohemia in 1504, where he collected material for his Germania illustrata . 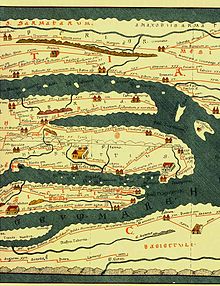 Celtis, who has been described as a German "archhumanist", founded several scientific societies ( sodalities ), for example in 1491 the Sodalitas litteraria Rhenana and in 1497 the Sodalitas litteraria Danubiana . His correspondence is an important source for the scholarly network of German humanism. Celtis is one of the few pioneers of Greek in Germany at the end of the 15th century.

In his lyric works , Celtis imitated Ovid and Horace . The Quattuor libri amorum (“Four Books of Love Poems”, Nuremberg 1502) can be regarded as the main work. Albrecht Dürer provided woodcut illustrations for this. Among other things, a geographical scheme of Germany is attached, which settles Bohemia and the Elbe in the middle of Germany, framed by four German cities. In addition, Celtis emerged as an epigram author and as the author of a poetics ( Ars versificandi et carminum , 1486).

Celtis was not only important as a poet, but also as a geographer and editor. He rediscovered a road map of the Roman Empire that was later given the name Tabula Peutingeriana . In 1493/94 in the monastery of Sankt Emmeram in Regensburg he found a manuscript with the Latin works of Hrotsvit von Gandersheim , which he published in Nuremberg in 1501 ( Opera Roswithae ). He was also the editor of works by Seneca and the Germania des Tacitus .

Finally, there is the major Germania illustrata project , which was supposed to convey all the scientific knowledge of its time on the history of Germany. In addition to the concept, he contributed Germania generalis (1500) and the city portrait of Nuremberg De origine, situ, moribus et institutis Norimbergae libellus (1502). Further investigations contributed u. a. Johannes Aventinus and Beatus Rhenanus .

Few humanists during the sixteenth century reached the vibrancy of Celtis' poems and could hardly match the extravagance of his life. Many, on the other hand, devoted a large part of their academic work to German national unification and religious reform. Vincenz Lang ( Vincentius Longinus Eleutherius , † 1503) was one of Celti's students . Celtis died of syphilis on February 4, 1508, at the age of 49 .

The memorial sheet that Celtis had created for his friends when he felt his death was approaching is often referred to as the “death picture”. The design is based on the model of Roman grave sculpture, in this form for the first time and never repeated. The woodcut was made by Burgkmair based on a sketch that he took in Augsburg and based on which he also created a commemorative coin .

The poet is depicted with his eyes closed and in mourning, but in the precious robes of Poeta laureatus. He is sitting in an arch made of two laurel garlands with banners winding along them, contemplating death and afterlife. In them, Christian death meditation is combined in a characteristic way with pagan-Roman glory. His hands rest on a stack of four books with the short titles of his works, which of course were largely only planned at the time of his death (until then only the book of the Amores was published ). The “operas” should “follow” him in posterity, as the quote from the Secret Revelation (14.3) says in a bold modification of the actual meaning. In front of the author's figure, on a stone parapet, there is a heraldic shield with his name initials CC and an inscription which, in addition to two distiches to the reader, contains formal information on life and death.

Prints of the woodcut have survived in three different versions. The first condition was so flawed (for example, one of the banners was reproduced in mirror writing) that a new edition was made in the same year. The third state correctly indicates the year of death VIII (1508) instead of VII (1507); in this version prints were sent to the friends.

Inscription on the tomb in St. Stephen's Cathedral in Vienna

Celtis was first buried on the east side of the north tower of St. Stephen's Cathedral, where a copy of his tombstone stands today. The original stone from around 1515 is now embedded in the west wall. The inscription reads:

God the best and greatest [consecrated]. Dutifully erected for Conrad Celtis Protucius, the poet from Eastern Franconia , based on his will.

I LIVE [in the laurel crown: VIVO]

The Humanist Gymnasium in Schweinfurt was named after Celtis in 1964 . Streets also bear his name. a. in Munich , Nuremberg and Vienna as well as in his home village Wipfeld . There, in 1978, the local coat of arms was designed based on its monogram .

A bust made by Fidelis Schönlaub was displayed in the Hall of Fame in Munich . The Literaturhaus Wipfeld houses a permanent exhibition and uses audio stations to present excerpts from his work. 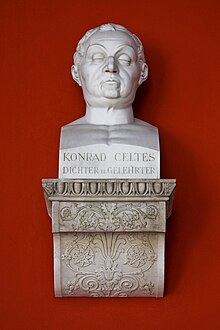 Bust in the Hall of Fame , Munich