Franz Graf-Stuhlhofer (born June 4, 1955 in Vienna ), until his marriage to Franz Stuhlhofer , is an Austrian natural science historian , church historian and Baptist theologian who lives in Vienna. He teaches free church religion and natural science history at schools and universities and publishes in historical, theological and philosophical journals and book series. As a professor at the Kirchliche Pädagogische Hochschule Wien / Krems , he is involved in the training and further education of free church teachers of religion. 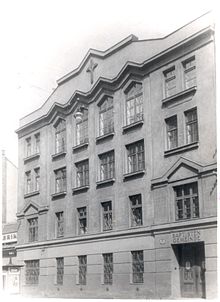 House of the Viennese Baptist Congregation, of which Graf-Stuhlhofer is a member

The results of Graf-Stuhlhofer's research, which concerned different periods of history, were received in several areas. His statistical approach to the history of the Bible canon , which was also applied to the time of the early Church , was taken up in the introduction to the New Testament . His studies of the history of the University of Vienna in the early 16th century led to new insights, for example regarding the continued existence of the Poet College . His thesis of a rather slow increase in scientific knowledge compared to popular beliefs is based on the history of modern natural science . The history of the Nazi era relates to his depictions of the sermons of the preacher Arnold Köster, who was critical of National Socialism, as well as the behavior and fate of the Vienna Academy of Sciences . Often reference is also made to Graf-Stuhlhofer's critical comparisons of the predictions based on Bible passages and the near future of Bible Students around 1900 and around 1970, as well as by Protestant authors in the years before 1989, with actual world developments.

Franz (Graf-) Stuhlhofer grew up in Vienna, where he still lives today. Here he studied history, science and theology. In 1980 he was with an investigation into an acting after 1500 in Vienna humanistic astronomers to Dr. phil. PhD (in Modern History , with a minor in Ancient History ). The study in Vienna was followed by two semesters of history of natural sciences at the University of Hamburg . He completed his science studies in 2002 at the University of Aarhus (Denmark) with a Bachelor of Science .

He has been married to Adelheid Graf since 1994 and has had the double name Graf-Stuhlhofer ever since . His earlier publications were still under Franz Stuhlhofer .

He teaches free church religion at a school, biblical studies and dogmatics at a university of education and natural science history at the University of Vienna .

Graf-Stuhlhofer turned to the history of the impact of the Bible using quantitative methods. He examined how intensively the individual books belonging to this “Bible” collection were actually used in sermons and in theological disputes; its results appeared as a book: The Use of the Bible from Jesus to Euseb . Graf-Stuhlhofer's access found its way into the German and English language introductory studies to the New Testament .

In his portrayal of the biblical canon history , John Barton relies heavily on Graf-Stuhlhofer's quantitative results, through which - according to Barton's assessment - the canon discussion has reached a new level. Barton considers the finding that in practice there are often three classes of fonts with regard to the intensity of use to be fundamental.

Reviews in theological journals judged the results of this new approach as stimulating, but also referred to methodological difficulties - in the opinion of some reviewers not sufficiently taken into account.

Graf-Stuhlhofer also applied the quantitative consideration of the use of the Bible to other epochs of church history, for example to individual reformers such as Martin Luther. 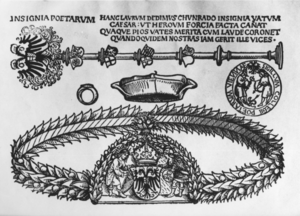 The insignia of the Poet College

University of Vienna after 1500

In 1501, Emperor Maximilian I founded a pioneering humanistic institution, a " Collegium poetarum " ( poet college ) at the University of Vienna, with four chairs. Konrad Celtis was the initiator and leader. Historians used to estimate that this college lasted at most until the death of Celtis in 1508, i.e. only operated for a few years. On the basis of several circumstantial evidence, Graf-Stuhlhofer came to the conclusion that this college outlived Celtis' death and continued into the 1530s - i.e. for several decades. This new assessment was accepted and expanded by Kurt Mühlberger , the long-time director of the Vienna University Archives. 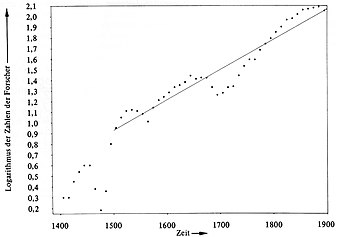 The number of important naturalists has doubled every century since around 1500.

In science research , the application of scientific methods to science itself, the history of science is also included. Graf-Stuhlhofer assumed that the selection made by science historians was reasonably appropriate to the historical course, and statistically evaluated chronological tables of important discoveries and lexicons of great naturalists . Apart from the possibility of drawing conclusions about the historical course, such a consideration is also suitable for self-reflection of such lexicons, because they show the editors of these lexica the historical impression conveyed by their selection.

Graf-Stuhlhofer considers the sermons of the Baptist Arnold Köster given in Austria during the Nazi era to be unique, as they repeatedly contain political references and these often contain a criticism of the peculiarities of National Socialist propaganda and practice.

The Christian expectation of the return of Jesus has often been linked to current political events, especially since the Six Day War in 1967. Books with the message that the end is now imminent also enjoyed high circulation in the German-speaking area. For the first time, Stuhlhofer undertook a critical review of the announcements contained in these books and showed that they were largely wrong.

to use the Bible:

on astronomy and astronomy in the late Middle Ages and early modern times:

on Christianity in Austria in the 20th century:

on the history of Jehovah's Witnesses:

on science in the Nazi era:

on science and religion: