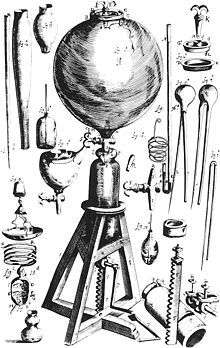 Early 17th century air pump by Robert Boyle . The history of science deals with the institutions and practices as well as with the controversies, objects of research and instruments that the sciences have produced in the course of their development.

A first stage in the history of science ties in with the work of individual scholars, in the sense of depicting famous men . An early example of this is the biographically arranged presentation of the history of astronomy in Vienna by Georg Tannstetter ( Viri Mathematici , 1514). A historiography carried by a sense of success places the achievement of the present state in the foreground; it then comes down to who was “the first” who had advanced to a point of view that is still recognized today. The achievements of previous researchers are then divided into two parts by repeatedly asking what they had already recognized and what had not yet.

This simple approach dominated until after 1900. New approaches emerged in the 20th century. In the USA , material from the history of the natural sciences was used as the basis for questions in other disciplines: Robert K. Merton developed the (external) sociology of science from around 1940 . Thomas S. Kuhn relied primarily on the history of astronomy and physics in his concept of the structure of scientific revolutions (English 1962), through which he spread a new view of the theory of science . The connection between these three disciplines - history of science, sociology and theory - was then the concern of the university's science research in Bielefeld. The term STS ( science, technology & society ), adopted from the Anglo-American area, is intended to emphasize the breadth of the subject area to be examined, more than would be possible with a term such as the history of science . In addition, the quantitative view of the history of science practiced by Derek de Solla Price (his book "Little Science, Big Science", 1963 became famous) gained influence; It was the scientometrics developed.

Since the late 1970s, the practical dimensions of the sciences ( practical turn ) have been given greater attention, with their objects, representations and instruments as well as with the interactions and negotiation processes of scientific institutions and research practice, e.g. B. by Morris Berman .

The history of science is a relatively young scientific discipline. The oldest scientific-historical specialist society in the world is the " German Society for the History of Medicine and Natural Sciences " founded in 1901 . The pioneers in the history of science were the Cambridge mineralogist and philosopher William Whewell (1794-1866), the French theoretical physicist Pierre Duhem (1861-1916) and the Austrian experimental physicist, sensory physiologist and philosopher Ernst Mach (1838-1916), who was appointed to a chair in 1895 "Philosophy, esp. History and Theory of Inductive Sciences" at the University of Vienna - one of the first chairs for the history and theory of science worldwide. Another pioneer was Karl Sudhoff , who set up the Institute for the History of Medicine and Natural Sciences , founded in 1906 - it was the world's first institute for medical history. In 1907 he started the journal Archive for the History of Medicine , which was later named Sudhoffs Archive after him and expanded to include the history of natural science (and finally the history of science).

The first institute for the history of natural sciences was established in Frankfurt / Main in 1943 (by Willy Hartner ); Institutes followed in Hamburg (1960, initiated by Bernhard Sticker and Hans Schimank ) and Munich (1963, initiated by Kurt Vogel ). Further institutes and chairs were set up in Tübingen, Stuttgart, Mainz and Berlin. Research into history using humanities methods differs significantly from scientific research, which is why such initiatives were necessary for the history of natural sciences (and similarly for the history of mathematics , medicine and technology ) - these disciplinary histories were particularly dependent on their institutionalization. The humanities and social sciences are closer to reflecting on the history of their own subject.

With the establishment of the Max Planck Institute for the History of Science in 1994, the Max Planck Society provided a lasting impetus for research in this area. At German universities , the subject is mostly in the areas of philosophy , history (e.g. connected with university history ) or within the respective discipline (e.g. medical history). The University of Hamburg , the University of Regensburg , the TU Berlin , the Friedrich Schiller University Jena and the University of Stuttgart offer their own major courses. As a historical subject, the methodology is closely related to the historical sciences . At the same time, anchoring in the respective specialist discipline is essential. With the reform of the study programs in the course of the Bologna Process, the range of purely historical study programs was further restricted. A major bachelor's degree is only offered at the University of Stuttgart, while master’s courses in the history of science are only available at the Friedrich Schiller University of Jena and the University of Regensburg, which for reasons of capacity can only offer a bachelor’s supplementary subject. There are also integrative master’s courses on knowledge cultures ( e.g. in Frankfurt and Stuttgart) or on digital humanities , in which the history of science plays an important role. In 2011, after a three-year vacancy, the chair of the history of science at the Ludwig Maximilians University in Munich was filled and has its own department integrated into the historical sciences .

At German universities there are now a number of professorships with different orientations and focal points as well as various graduate colleges . Interdisciplinary research activities ( transdisciplinarity ) will become more important in the future for the differentiation of the subject. In German science policy, the history of science is classified as a small subject .

Introduction to the history of science

Current trends in the history of science

Practical turn in the history of science

Wikisource: History of Science in Germany  - Sources and full texts