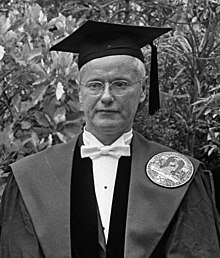 Robert King Merton (* 4. July 1910 in Philadelphia , Pennsylvania as Meyer Robert Schkolnick ; † 23. February 2003 in New York ) was an American sociologist . He was the 47th president of the American Sociological Association .

Robert K. Merton was born as Meyer Robert Schkolnick in Philadelphia on July 4, 1910, into a family of Yiddish-speaking Russian Jews who emigrated to the USA in 1904. Merton studied from 1927 at Temple University with George E. Simpson . From 1931 he was research assistant with Pitrim A. Sorokin at Harvard University , where he then taught until 1937. In 1938 he became a professor at Tulane University and in 1941 at Columbia University , where he was Giddings Professor of Sociology in 1963 and received the rank of University Professor in 1974 . From 1942 to 1971 he was Associate Director of the Bureau of Applied Social Research there. In 1979 he retired. In 1984 he retired from teaching. He was also an Adjunct Professor at Rockefeller University and served at the Russell Sage Foundation.

Merton is the father (from his first marriage to Suzanne Carhart, which was married in 1934 and divorced in 1968 and from which two daughters also come) of Robert C. Merton , the 1997 Nobel Prize in Economics . In 1993 he was his second marriage to the sociologist Harriet Zuckerman married.

Merton began his academic career with an important contribution to both the sociology of religion and the sociology of science . In 1938, in his first book Science, Technology and Society in 17th-Century England, he developed the Merton thesis named after him . It consists of two independent parts. First, the thesis is a theory that changes in science are caused by an accumulation of observations and improved experimental techniques and methodological approaches. Second, the thesis argues that the scientific revolution in the 17th and 18th centuries was essentially driven by Protestantism , especially English Puritans and German Pietists . In later publications, Merton expanded his thesis and defended it against criticism.

He tried to overcome the static of Parsons' structural functionalism by emphasizing the dynamics of social processes.

Merton has become known for his position that sociology lacks the empirical basis for developing grand theories . Accordingly, he advocated concentrating on theories of medium range , in which the theory generation can be linked to an empirical foundation.

In the mid-1930s, Merton was worried about the phenomenon of National Socialism and especially about the willingness of German scientists to put themselves at the service of the Nazi regime. Therefore, in a lecture from 1937 ("Science and the Social Order") and an essay from 1942 ("Science and Democratic Social Structure"), he tried to draw a strict line between "real", that is, democratic and ethical science on the one hand and unethical, anti-intellectual "anti-science" on the other. According to Merton, four characteristics distinguished real science:

These characteristics, also known as the CUDOS principles after the English first letters, had an impact on the extremely negative perception of German science during the Nazi era , especially in Great Britain and the USA , which was rejected as "unethical" or even "worthless" as a whole . However, this contradicted the interest of all allied warring parties, which had already emerged during the Second World War, to get hold of as many German scientists as possible in order to benefit from their findings (see Operation Overcast ).

Merton is also the founder of a criminal- sociologically important anomie theory (first formulated in 1938). He assumes a contradiction between the legitimate cultural goals of a society (e.g. consumption in connection with status symbols ) and the unequal distribution of the means (e.g. money, influence , relationships) with which these goals can be achieved. In such a situation anomie arises which, according to Merton, can be responded to in five ways.

Merton received more than twenty honorary doctorates (including Columbia University, Chicago, Oxford, Harvard, Yale, Hebrew University, Leiden). In 1962 he was a Guggenheim Fellow and in 1983 he was a MacArthur Fellow . In 1994 he received the National Medal of Science . He was a member of the American Academy of Arts and Sciences (1950), the National Academy of Sciences , the Academia Europaea , the American Philosophical Society and the Royal Swedish Academy of Sciences and was a corresponding member of the British Academy .

In 1990 the Robert K. Merton Professorship in Social Sciences at Columbia University was named after him.