Burglengenfeld: Memorial to Johann Michael Fischer in his native town Burglengenfeld in the Upper Palatinate.

Johann Michael Fischer (born February 18, 1692 in Burglengenfeld / Upper Palatinate ; † May 6, 1766 in Munich ) was an important German master builder during the change from late baroque to rococo .

Fischer was the son of a respected city mason. After 1712 he spent his apprenticeship years in Bohemia , Moravia and Austria . His training in Bohemia introduced him to the possibilities of curved architecture, which he repeatedly echoes in his work, but which have been brought into harmony with the specifically southern German-Bavarian tradition. These stylistic features can be observed especially in the early work. In addition to the Bohemian roots, the influence of Giovanni Antonio Viscardi can also be felt in the late baroque central rooms of Johann Michael Fischer.

In 1718 he settled in Munich. He became the parlier of Johann Mayr, with whom he built, among other things, the large horse stables with servants' apartments at the Lichtenberg am Lech hunting lodge in 1721 . In 1723 he bought the master craftsman's license from the widow of a deceased master mason. By marrying Johann Mayr's daughter in 1725, he was finally able to establish himself as an immigrant within the guild . The first buildings in Schärding , Deggendorf and Niederalteich , to which the parish church of Kirchham came in 1725 , were enough references for the clergy in Munich to recommend Fischer to the Premonstratensian Abbot of Osterhofen for the new building of the collegiate church. From 1726 to 1729 Fischer built the church of St. Anna im Lehel and from 1732 to 1741 the new collegiate church of the Augustinian Canons' Monastery was built in Dießen am Ammersee .

Between 1735 and 1739 Fischer then built his three masterpieces of European sacred architecture, the Augustinian Church in Ingolstadt , the Aufhausen pilgrimage church and St. Michael in Berg am Laim . All three are central rooms on the floor plan of an unequal-sided octagon.

Fischer, who is now considered a church building specialist, later built the collegiate churches of Münster Zwiefalten and Ottobeuren , after which Benediktbeuern , Wiblingen , Schäftlarn and finally Rott am Inn and Altomünster are built . In the course of his career he was appointed Bavarian court architect and master builder from Cologne . His grave is on the south wall of the Frauenkirche in Munich. 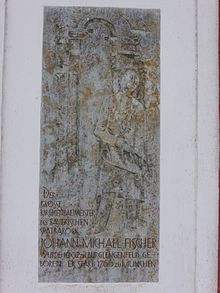 Furthermore, Fischer possibly supplied the plans for the church building in Wiblingen , which, however, have only been handed down in incorrect copies.

Defined building types, which he constantly reinterpreted and varied, were decisive in Fischer's work. For the central building , the arcade octagon, or octagon with unequal sides, should be mentioned first, for the longitudinal building the traditional wall pillar church of southern German design. The effects of the prospectus, which Fischer achieved partly by combining different, often very heterogeneous components, are particularly outstanding. A special characteristic of Fischer was the very tectonically oriented use of the column and pilaster order in contrast to many of his contemporaries, in particular Dominikus Zimmermann , who used the order in a much more ornamental way. Fischer's columns and pilasters really seem to carry something and give the building structure and strength. Fischer often connected the beginnings of the arches of niches, windows and portals with the entablature via continuous cornices.

Among Fischer's students are Balthasar Trischberger and Leonhard Matthäus Gießl .

His bust was displayed in the Hall of Fame in Munich.

The Johann-Michael-Fischer-Gymnasium in Burglengenfeld, which has existed since 1968, was named after him.