Engraving by Motín de Esquilache from 1766

The Spanish government in Madrid under Prime Minister Jerónimo Grimaldi and his closest advisor Leopoldo de Gregorio, Marqués de Esquilache , banned its citizens from wearing the round broad-brimmed hat ( sombrero redondo ) and long coat on March 10 as part of a radical reform program . Anger in the population triggers the Madrid hat riot ( Motín de Esquilache ) 13 days later on Palm Sunday , which spreads rapidly across the country from Madrid. King Carlos III flees to Aranjuez and leaves the government to the moderate reform minister Pedro Pablo Abarca de Bolea, conde de Aranda . The latter orders that the uprising be put down by military means, but the troops cannot restore the authority of state power. It is only thanks to the intervention of two Jesuits that the rebels give in to minor concessions and the dismissal of de Esquilache. The Marqués leaves the country via Cartagena and embarks for Naples. The Jesuit order , which made a significant contribution to the containment of the uprising, is subsequently suspected of being the mastermind against any evidence .

The Duchy of Lorraine , formerly part of the Holy Roman Empire is, after the death of Duke Stanisław I on February 23, according to the provisions of the Treaty of Vienna from 1738 as a province of France annexed.

Friedrich V , who died on January 14, is followed by his almost 17-year-old son Christian VII as King of Denmark and Norway , who also becomes Duke of Schleswig and Holstein . Government affairs leads first, when it belonged to his father, the secret council called the Cabinet , in particular, Count Johann Hartwig Ernst von Bernstorff , chairman of the German firm . But after just a few days, the new king dismisses the long-serving court marshal Adam Gottlob von Moltke . At the age of seventeen he married his fifteen-year-old cousin Caroline Mathilde of Great Britain on November 8th at Christiansborg Palace , to whom he was engaged two years ago, but to whom he publicly declares that he does not love her. 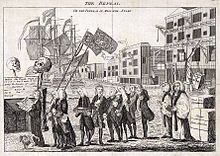 The stamp law is carried to the grave

The British Parliament raises the declaratory act of March 18, the Stamp Act on which the North American colonies has triggered resistance. At the same time, however, it states that it naturally and in principle has the right to enact laws for the American colonies in every respect . 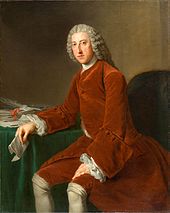 Due to internal differences within the Whig Party, Charles Watson-Wentworth, 2nd Marquess of Rockingham , resigns as Prime Minister of Great Britain in June . King George III then instructs his party colleague William Pitt to form a government. He takes over the post of Lord Seal Keeper and enters the House of Lords with the newly created title of Earl of Chatham , which costs him numerous sympathies from his voters. The previous Foreign Secretary Augustus FitzRoy, 3rd Duke of Grafton , becomes First Lord of the Treasury .

Hsinbyushin on his war elephant

In the Siamese-Burmese War , the siege of the Siamese capital Ayutthaya by the Burmese ruler Hsinbyushin from the Konbaung dynasty begins with around 50,000 men . King Ekathat offers to surrender, but Hsinbyushin wants the total destruction of the Ayutthaya kingdom . On January 20, the Siamese made a sortie with roughly the same troop strength, but their vanguard was so panicked by a volley of muskets that they flee back into their own ranks. Thousands of Siamese are killed by the pursuing Burmese. Siam tries to provide relief with around 10,000 men, but the Burmese hold their positions.

In December, the Siamese make one final effort to break the Burmese siege by using gunboats to attack the Burman’s underwater entrenchments. They are repulsed again with great losses. Phaya Taksin withdraws from the capital with around 500 soldiers in order to build up a new force in the east of the country.

Franz Xaver Wolfgang von Orsini-Rosenberg , first minister in the Grand Duchy of Tuscany since February 9 , begins implementing economic reforms on behalf of Grand Duke Peter Leopold . The previously regulated trade in grain, flour and bread will be released by law. The Tuscan administration will also undergo extensive reform over the next few years.

The auction house Christie’s , founded by James Christie shortly before, will hold its first auction on December 5th.

The Arnsberg Intelligence Journal is the first regularly published magazine in the Duchy of Westphalia .

The journey of the dolphin

The British naval officer Samuel Wallis , who was put on half pay in 1763 after the end of the Seven Years' War , will be recalled to active duty in February and will be given command of the frigate Dolphin , which on May 9th after a two-year circumnavigation of the world under John Byron has returned. He is given the task of sailing with the Swallow under the command of Philip Carteret into the Strait of Magellan and then circumnavigating the world and using this opportunity to find, measure and map land or islands in the South Pacific. Tobias Furneaux serves as the second lieutenant under Valais . The ships set sail from Plymouth on August 26 and reach the Strait of Magellan on December 17, where they will have to contend with adverse winds until the end of the year. 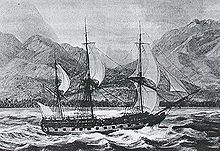 The officer Louis Antoine de Bougainville was commissioned by the French government to be the first Frenchman to sail around the world and set sail from Brest on December 15 with the frigate La Boudeuse , accompanied by naturalists such as the botanist Philibert Commerson and his husband disguised assistant Jeanne Baret , the astronomer Pierre-Antoine Véron and the adventurer Karl Heinrich von Nassau-Siegen .

The sports and temple facilities at Olympia are being rediscovered.

Jens Juel: Self-portrait on the easel

High water marks of the Tarn in Albi 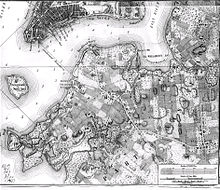 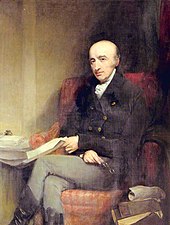 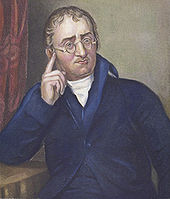 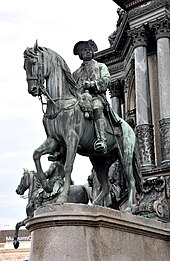 Daun's statue on top of the Maria Theresa monument in Vienna

Monument to Jean-François Lefèbvre in Abbeville