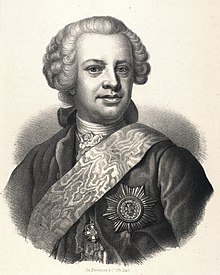 Johann Hartwig Ernst Graf von Bernstorff (born May 13, 1712 in Hanover , † February 18, 1772 in Hamburg ) was a German diplomat and Danish Foreign Minister (1751-1770). He was an enlightened reformer and friends with Friedrich Gottlieb Klopstock .

As the younger grandson of Andreas Gottlieb von Bernstorff (1640–1726), Johann Hartwig Ernst von Bernstorff was prepared for a diplomatic career from an early age. After studying at the Collegium illustrious and at the University of Tübingen and a grand tour through Europe under the care of his tutor Johann Georg Keyßler, together with his brother Andreas Gottlieb, he entered the Danish civil service in 1732.

1733 he was by Christian VI. sent as a diplomat to the Saxon court in Dresden . In this function he accompanied August III. to Warsaw , where he stayed until 1737. Then he went as a Danish envoy a. a. to Regensburg and Paris , where he made close friends with Louis-Charles-Auguste Fouquet de Belle-Isle and his wife during the six years of his stay (1744–1750) and made contacts with Voltaire and Montesquieu .

Bernstorff's hard work and skill not only led to Christian VI. awarded him the Dannebrog Order in 1746 and Frederick V promoted him to the Privy Council in 1749. His sovereign, Friedrich Ludwig von Hannover , the Prince of Wales , also offered him the prospect of becoming Prime Minister of Hanover like his grandfather . However, Prince Friedrich died in 1751, long before his father Georg II , so that Bernstorff was no longer bound by the promise made to him. In the same year, as the successor to Johan Ludvig von Holstein , Bernstorff became head of the German Chancellery in Copenhagen for Schleswig-Holstein and, at the same time, as the successor to Johann Sigismund Schulin, Foreign Minister of the Kingdom of Denmark and the most influential man in the Danish state under the kings Friedrich V and Christian VII.

Bernstorff managed to keep Denmark out of all conflicts. In the Seven Years' War Denmark remained neutral. As a mediator between the Duke of Cumberland and Marshal von Richelieu in the convention of Kloster Zeven , Bernstorff tried - albeit in vain - to guarantee his home, the Electorate of Braunschweig-Lüneburg , protection through neutrality. He concluded treaties with Sweden and Russia which guaranteed free navigation for the Nordic countries and at the same time prevented the British from accessing the Baltic Sea. With France he concluded a treaty on mutual defense on May 4, 1758. Denmark's contribution was a 24,000-strong Danish army on the Elbe to protect Holstein, Hamburg and Lübeck.

Another conflict resolved by Bernstorff was the enmity between the Danish royal family and the dukes of Schleswig-Holstein-Gottorf , which had existed for over 150 years . The latter had been powerless for a long time, but in the middle of the 18th century, when two members of the family, Karl Peter Ulrich and Adolf Friedrich von Schleswig-Holstein-Gottorf became kings of Russia and Sweden, respectively, they became a threat to the Danish Royal house and its claims to ownership of Schleswig-Holstein . The Swedish King Adolf Friedrich had already waived his claims as Crown Prince in 1749, Peter III. of Russia, on the other hand, was not prepared to give up Gottorf's shares without a fight, and immediately after Denmark took office in 1762, declared war. A Danish army under the French General Saint-Germain advanced against him, but before the battle broke out, the Tsar was murdered. Bernstorff signed an alliance agreement with his successor, Catherine II . His greatest success, the Treaty of Tsarskoe Selo , in which Gottorf's shares in the Duchy of Holstein were exchanged with the Counties of Oldenburg and Delmenhorst, which meant that Schleswig-Holstein was reunited in one hand for the first time since the 16th century, was completed by his nephew and successor Andreas Peter von Bernstorff after his death.

Thanks to the foreign policy neutrality pursued by Bernstorff and the promotion of trade, prosperity increased throughout the Danish state . For years he also chaired the Board of Commerce. His attempts to establish an industry in Denmark were unsuccessful, but his nephew successfully continued his agricultural reforms and peasant liberation.

Bernstorff was also active as a patron of art and literature. Copenhagen, where the St. Petri Church represented a German enclave and cultural colony of the port city in the midst of the Danish church organization, became a center of German culture. Bernstorff never learned Danish in his life . The house of Balthasar Münter z. B., Friedrich Münter's father , soon became the center of the German community in Copenhagen. Here came u. a. Friedrich Gottlieb Klopstock , Counts Friedrich Leopold zu Stolberg-Stolberg , Christian zu Stolberg-Stolberg , Matthias Claudius , Heinrich Wilhelm von Gerstenberg , Johann Andreas Cramer , Johann Bernhard Basedow and Carsten Niebuhr . He had a deep friendship with Klopstock. Bernstorff also took care of the improvement of popular education and initially promoted Basedow, although his rationalism did not correspond to his own pietistic religiosity. He was also elected honorary member of the Göttingen Academy of Sciences in 1769 .

In addition to a city palace in Copenhagen, he had Bernstorff Castle built on his land near the city . There he also abolished serfdom , which , however, persisted on the Wotersen , Wedendorf and Stintenburg estates , which Klopstock wrote an ode about, which did not belong to the entire Danish state .

After the death of King Friedrich V, his son Christian VII raised him to the rank of count in 1767. But after the young king got to know Johann Friedrich Struensee , Bernstorff's influence declined. In 1770 he was released from Struensee and left Copenhagen. He turned down an offer from Catherine II to join her service. Before he could be called back after Struensee's fall, he died on February 14, 1772. He was buried near his estate Wotersen in the church of Siebeneichen , which he had built in 1753 and of which he was the patron.

In 1751 Bernstorff married the 18-year-old Charitas Emilie von Buchwald (1733–1820) - mainly because of her dowry. From 1779 she lived in Weimar with her niece Sophie von Schardt . Their brother was Hans Joachim von Bernstorff (* August 3, 1754; †?), The nephew of Charitas Emilie, who was the office director in Celle in 1778 and 1780 . Charitas was the godmother of Johann Gottfried Herder's children Adelbert and Emil.