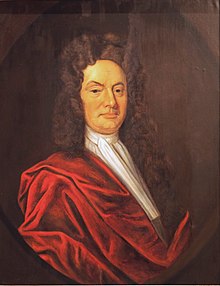 Andreas Gottlieb Freiherr von Bernstorff (* March 2, 1649 in Ratzeburg ; † July 6, 1726 in Gartow ) was a chancellor in the service of the Principality of Lüneburg and later first Minister of the Electorate of Braunschweig-Lüneburg ("Kurhannover"). After Georg Ludwig von Hanover ascended the English throne , he went to England, remained a leading minister in the electorate and at times had considerable influence on English politics.

His father was Andreas von Bernstorff and his mother Anna Elisabeth (born von Bülow-Hundorf ). He studied between 1665 and 1668 at the University of Helmstedt . Then he continued his training at the Imperial Court of Justice in Speyer . He then went on his Grand Tour through France, Italy and various German capitals in 1669 and 1670 .

He then entered the service of Duke Christian I. Louis von Mecklenburg-Schwerin . He soon switched to the service of Duke Georg Wilhelm von Braunschweig-Lüneburg , who ruled the Principality of Lüneburg . At his court in Celle he came into close contact with Chancellor Johann Helwig Synold, known as von Schütz. In 1676 he and Jeanette married Lucie Synold, a daughter of the Chancellor. A year later he succeeded Johann Helwig Synold as Chancellor. While his predecessor had pursued a policy that was loyal to the Reich, von Bernstorff pursued a course aimed at strengthening the Guelph domestic power. He also pursued an anti-Brandenburg policy. In the 1680s he was instrumental in bringing Braunschweig-Lüneburg-Celle into line with Wilhelm III. of Orange responsible. He included the country in the coalition against Louis XIV . With the Hamburg settlement (1693) he was able to secure the annexation of the Duchy of Saxony-Lauenburg by Georg Wilhelm von Lüneburg-Celle and then the transfer of inheritance to his nephew Georg I of Hanover and Great Britain.

After the union of the Duchy of Braunschweig-Lüneburg-Celle with Kurhannover in 1705, von Bernstorff entered service in Hanover. After the death of Franz Ernst Graf von Platen , he became the first minister of the electorate in 1709. He played a key role in enabling Elector Georg Ludwig to ascend to the English throne. This contributed to the fact that he advised the elector not to interfere in the party disputes in England. The English throne plans were supported by the policy pursued by Bernstorff to support the emperor and the Netherlands in the fight against France.

After the Elector's accession to the throne as George I , von Bernstorff went to England with him. In the following years he remained Hanover's most influential minister. He was the first head of the German law firm . He also had a significant influence on English politics. Due to the growing influence of James Stanhope, 1st Earl Stanhope , he lost his influence on English politics in 1720. For a few years he once again took over the management of the government in Hanover and was also a member of the local law firm. Between 1721 and 1724 he was actively involved in the criminal and bankruptcy proceedings against the Jewish bankers Gumpert and Isaak Behrens; he also personally directed their torture.

During the last two years of his life he withdrew to his large estates in Northern Germany. He had acquired the Gartow rule in the Principality of Lüneburg and the Wotersen estate in the Duchy of Lauenburg. He had new castles built in Gartow and Wotersen. He left a family statute and a family affidavit. In view of his previous position as leading minister, it is noteworthy that, as the leader of the Mecklenburg estates, he resolutely opposed the dukes' attempt to expand their power. As early as 1716 he was raised to the status of imperial baron.