This article deals with the city, for other meanings see Ratzeburg (disambiguation) .

Ratzeburg ( Ratzborg in Low German ) is a small town in Schleswig-Holstein , near the border with Mecklenburg-Western Pomerania . Ratzeburg is the district town of the Duchy of Lauenburg . It is known as a climatic health resort and due to the location of its old town in the middle of the Ratzeburg Lake and its connection with the mainland, which only runs over three dams, it is also an "island town". In addition to the old town island, St. Georgsberg, Vorstadt and Dermin also belong to the urban area.

Ratzeburg is located in the Lauenburg Lakes Nature Park . The next larger cities are Lübeck , Hamburg and Schwerin . Ratzeburg is part of the Hamburg metropolitan region .

Parts of the municipality, in particular the Ratzeburg Cathedral and the old town, are located on the so-called Cathedral Island in Lake Ratzeburg . 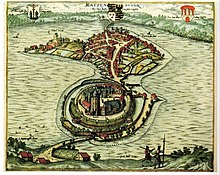 Heinrichstein in memory of Heinrich von bath side

Plan of the city and fortress of Ratzeburg (1730)

The name goes back to the prince Ratibor / Ratse , who was at the head of the Obodritischen sub-tribe of the Polabians . He resided here in the early 11th century in a ring wall. The “Racesburg” is mentioned in 1062 in a certificate of receipt from Heinrich IV issued in Worms but not handed over . According to the document, he gave the castle to Ordulf, Duke of Billung . Even Adam of Bremen mentioned 1076, the then Slavic Ratzeburg in his description of the death of Ansverus on 15 July 1066 on the Rinsberg at Einhaus above the Ratzeburg Lake: Ansverus monacus et cum eo alii apud Razzisburg lapidati sunt. Idus Iulii passio illorum occurrit. (The monk Answer and others with him were stoned near Ratzeburg. Their martyrdom took place on the Ides of July.) The Ansverus cross can still be seen today on the edge of the forest in Einhaus near Ratzeburg. Christianization took place in three attempts , the city was founded and the diocese was finally established in 1154 by Heinrich the Lion (see also the article in the diocese of Ratzeburg ) . A memorial stone erected after 1163 commemorates Heinrich von Badenide , the first Count of Ratzeburg . The stone on the cathedral island bears the (Latin) inscription:

“During the times of King Conrad and Duke Heinrich of Saxony, Count Heinrich came to Ratzeburg and was the first to give Christianity a solid foundation. Rest his soul in peace. Amen."

Since the 17th century

While the city for later Saxe-Lauenburg , who later became Prussian land circle Lauenburg , was one that got pen area with the Domhof 1648 by the Peace of Westphalia as Principality of Ratzeburg into the hands of Mecklenburg and became in 1701 part of Mecklenburg-Strelitz .

The city, which was heavily fortified by Duke Georg Wilhelm von Braunschweig-Lüneburg in 1692, aroused the displeasure of the Danish King Christian V , who more or less completely reduced Ratzeburg to rubble and ashes except for the Cathedral Island in 1693, so that a complete reconstruction in the Baroque style the example of the city ​​center of Mannheim became necessary. The last fortifications were removed by the Danes in 1816.

On the market square in front of the Alte Wache, the more than 300-year-old peace linden tree from Ratzeburg , which has been a natural monument since 1935, commemorates the destruction of Ratzeburg . This linden tree was supposed to give way to a new marketplace in 2010, but has been preserved after violent public protests. Ratzeburg is generally known for its stock of old linden trees, which the romantic writer Victor Scheffel described in the summer of 1848 on his trip with Reich Commissioner Carl Theodor Welcker .

Equipped with a recommendation from the poet Friedrich Gottlieb Klopstock , the English romantic Samuel Taylor Coleridge spent the winter of 1798/1799 in Ratzeburg with the local pastor. He describes the city and its surroundings with very flattering words (“The whole has a sort of majestic beauty, a feminine grandeur”), but criticizes: “The only defect in the view is, that Ratzeburg is built entirely of red bricks, and all the houses roofed with red tiles. To the eye, therefore, it presents a clump of brick-dust red. "

Relations with Bismarck and Moltke

Band of the Ratzeburg Jäger Battalion giving a concert in front of Prince Bismarck, Friedrichsruh April 1, 1895

On September 26, 1865, Prime Minister Otto von Bismarck appeared for the first time to accompany the Prussian King Wilhelm I in Ratzeburg. He wanted to receive the hereditary homage to the knights and landscape in the Petrikirche . The Duchy of Lauenburg had been linked to the Kingdom of Prussia in personal union since 1865, and Bismarck negotiated on behalf of the Prussian King (as Minister for Lauenburg) with the Lauenburg estates in order to achieve full integration into Prussia (in 1876 it became a Prussian district). In 1871, as a thank you for his role in the unification of the empire, Bismarck received part of the property in the Schwarzenbek office that had fallen to the Prussian king in Lauenburg (including the Sachsenwald), which the king raised to a knighthood. Bismarck was also awarded the duchy of Lauenburg when he left in 1890, but he did not use the title.

He came into contact with the Lauenburg Jäger Battalion No. 9 for the first time during the Franco-Prussian War, when it moved into a bivouac behind St. Ingbert on August 9 while advancing from the Saar .

It was not until November 30, 1890 that Bismarck returned to Ratzeburg, now as former Reich Chancellor, to inspect the monument before it was unveiled. He then visited the officers 'corps' casino.

He was an honorary citizen of Ratzeburg and appeared several times at the meetings of the district council, in which an armchair with the coat of arms of the first Chancellor of the German Reich remembered him.

Close relationships developed between the battalion and Bismarck in Friedrichsruh, about an hour away by train . This culminated when the battalion band congratulated the prince with a morning serenade on his 80th birthday.

Moltke had never officially been in Ratzeburg. But he had visited his sister who lived there several times. One of his favorite walks there was the path around the small Küchensee to the Waldesruh restaurant . In the immediate vicinity of the restaurant, a monument was erected in a large granite boulder on a field stone substructure. It shows the gold-plated inscription: Field Marshal Graf Moltke's favorite place. 1853-1888. The year numbers reminded of his first and last visit to Ratzeburg.

The monument to Kaiser Wilhelm I. 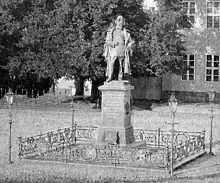 On September 26, 1890, the ceremonial unveiling of the imperial monument took place on the Ratzeburg market square. The construction of the monument was made possible by committed citizens of the city through collections of voluntary donations. The total cost of the monument was around 34,000 marks.

This 310 cm high statue of the deceased monarch , created by the Berlin sculptor Robert Bärwald and cast bronze by the bronze foundry of the Aktiengesellschaft [formerly] Hermann Gladenbeck & Sohn in Friedrichshagen near Berlin , stood on a pedestal made of red Swedish granite . On the front of the base was the dedication: "DEM EINIGER / DEUTSCHLANDS / KAISER WILHELM I. / DEM SIEGREICHEN / DAS THANKBARE LAUENBURG."

Round relief medallions by Bismarck and Moltke made of bronze were attached to the left and right of the base .

The statue and the reliefs were victims of the metal donation by the German people in 1944 ; the empty base was removed after 1945.

The cathedral island in 1895

At the end of the Second World War, the population of Ratzeburg grew significantly due to refugees and displaced persons from the former German eastern regions . In mid-March 1945, a trek control center was therefore set up in Ratzeburg. Ratzeburg was overcrowded and many of the refugees had to be transported on, only the sick remained. Not every refugee survived the rigors of their flight. In the cemetery on Seedorfer Straße, 191 graves of refugees, including 25 of children, testify to this suffering.

On May 2, 1945, Ratzeburg was occupied by the British without a fight. On the same day, the executive government fled from the Eutin - Plön area 50 kilometers further north to Flensburg - Mürwik . Only two days later, all German troops in north-west Germany, the Netherlands and Denmark were surrendered .

Since the local elections on May 6, 2018 , the 31 seats of the Ratzeburg city council have been distributed among the individual parties and lists as follows:

The turnout was 44.17%. Compared to the 2013 election, the number of seats in the city council has increased by seven.

The mayor is the chairman of the city council. Ottfried Feußner (CDU) has held this office since April 2003.

Memorial for the twin cities of Ratzeburg (behind the town hall) 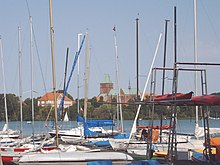 View over the Ratzeburg lake to the cathedral island

Arrival of the first train on the Kleinbahn in Ratzeburg on June 27, 1903

Ratzeburg is in the immediate vicinity of federal highway 207 , which runs as the old salt road from Lüneburg to Lübeck on the western city limits. The B 208 from Bad Oldesloe to Gadebusch and Wismar and in the direction of Schwerin runs through the city. To the north there is a connection to the Baltic Sea motorway A 20 (connection point Groß Sarau ), south to the A 24 Hamburg - Berlin , (connection points Talkau and Hornbek ). On February 20, 2012, one of the largest construction projects in the history of the island city began in Ratzeburg, namely the complete redesign of the eastern access to the island with the construction of two new bridges. Because of the special importance of this construction project, the city had set up its own website on this topic. On August 27, 2014, the so-called “southern collecting road” was opened to traffic and the construction project was essentially completed.

Ratzeburg is on the Lübeck – Lüneburg railway line . Ratzeburg can be reached every hour by train from Lübeck and Lüneburg . Ratzeburg is connected to the Hamburg transport association.

Until 1945 Ratzeburg was a railway junction . Here the Kaiserbahn crossed from Berlin via Hagenow and Zarrentin to Kiel (via Bad Oldesloe and Neumünster ). The route between Hollenbek and Zarrentin was interrupted by the division of Germany. The Bad Oldesloe – Ratzeburg section was shut down and dismantled in 1971. Since 1998, the Ratzeburg adventure railway trolleybuses have been running on the section to Hollenbek, which has become an important tourism factor with 50,000 guests annually.

The Ratzeburger Kleinbahn , which led to Klein Thurow from 1908 to 1934 , was only of regional importance.

Ratzeburg is also the seat of a local court (Herrenstrasse 11).

Water tower on the Hindenburghöhe

Parishes in the Duchy of Lauenburg district