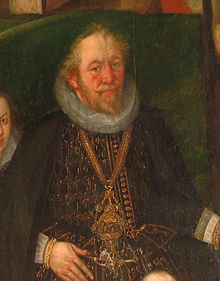 Franz was the second surviving son of Duke Franz I of Saxony-Lauenburg (1510–1581) from his marriage to Sibylle (1515–1592), daughter of Duke Heinrich of Saxony . The prince was brought up in the Lutheran faith and entered into first imperial and later Spanish military service.

In 1566 he took part in a campaign in Hungary and in 1568 the Duke of Alba promoted him to colonel in the Netherlands. In 1571 Franz's father resigned the government in favor of his son Franz. The bypassed older son Magnus , who was in the Swedish service, protested and took military action against Lauenburg. He conquered Ratzeburg, but was driven out by the troops of the Lower Saxony district thanks to Franz's help .

When trying to compare the two brothers got into a heated argument that their mother had to intervene to prevent an exchange of fire. Franz I then took over the government himself. After the death of his father in 1581, Franz ruled together with his brothers Magnus and Moritz . In 1585 Magnus was declared incapable of government by the Reichshofrat , while the government of Francis II and the succession of his sons were confirmed. Magnus was arrested on the run in Hamburg in 1588 and extradited to Franz. Franz had his brother imprisoned in the tower of Ratzeburg Castle until his death .

Franz managed to sort out the country's desolate financial situation. The quarrels with the city of Lübeck became more violent under Franz. He died in 1619 after having been plagued by "stone pains" for years without discussing the right of birthright with the estates.

Franz was married twice and had 11 sons and 7 daughters from his marriages. His first wife was Margarete (1553–1581), daughter of Duke Philip I of Pomerania on December 26, 1574 in Wolgast , with whom the following children were born:

Duke Franz II of Saxony-Lauenburg with Maria and their children 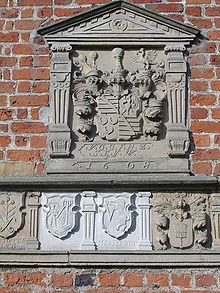 Coat of arms of Franz II. (Above) with Hadler peasant coat of arms on the choir of St. Jacobi Church in Cuxhaven- Lüdingworth

His second wife, Francis married on November 10, 1582 Wolfenbüttel with Maria (1566-1626), daughter of the Duke Julius of Brunswick-Wolfenbüttel . He had the following children with her: