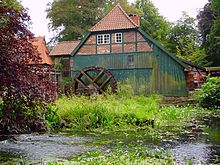 Kuddewörde is a municipality in the Duchy of Lauenburg in Schleswig-Holstein .

Kuddewörde is located on the Bille , which in the north-west forms the border with the municipality of Grande in the Stormarn district. In the southwest, Kuddewörde borders the Sachsenwald .

Kuddewörde, with the old Saxon name Kuthenworden , and Rotenbek were first mentioned in 1230 in the tithe register of the bishop in Ratzeburg . A keep of Duke Eric IV of Saxony-Lauenburg was destroyed in a dispute with the Hanseatic cities of Hamburg and Lübeck in 1420. In 1495, Duke Johann IV of Sachsen-Lauenburg founded a Wilhelmite monastery with a hospital. The Kuddewörde monastery existed until the Reformation , then until 1698 as a poor house. The buildings were demolished in 1780. The 15th century Kuddewörde Castle was demolished in 1585.

Of the 11 seats in the municipal council, the CDU has had all 11 seats since the local elections in 2018, other parties or voter communities have not run.

Blazon : “In red over a lowered, sloping silver wave bar, a silver crane holding a stone. In the right upper corner a silver-lined blue paw cross. "

Parishes in the Duchy of Lauenburg district