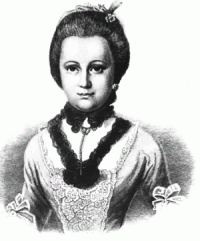 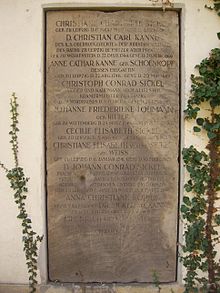 Anna Katharina Schönkopf (also called "Käthchen" and "Annette"; born August 22, 1746 in Leipzig ; died May 20, 1810 there ) was the daughter of the pewter and wine merchant Christian Gottlieb Schönkopf (1716–1791) and his wife Katharina Sibylla born Hauck (1714–1790), in whose inn the young Johann Wolfgang Goethe had lunch while he was studying in Leipzig.

The figure of Käthchen in Goethe's life

Goethe fell in love with the landlord's daughter when he met her in 1766. In his autobiography he portrays her as a little saint and as young, pretty, cheerful, loving , decent and worthy of honor. Since she was three years older than him and probably a lot more mature, she seems to have reacted reserved and cautious at first. In addition, it was probably clear to her that a relationship between the son of a doctor of law and an imperial councilor and the daughter of a pewter caster could not be considered befitting, which Goethe was also aware of.

Goethe's confidante in his relationship with Käthchen was Ernst Wolfgang Behrisch , ten years his senior , court master of Count Lindenau and an expert in all questions of elegant and gallant life and poetry.

Goethe was inspired by his love for the production of playful poetry in the style of the Rococo . This includes the data collected by Behrisch Annett songs , including the famous song Annette to her lover :

I saw Doris standing by Damotene
He took her hand tenderly;
They looked at each other for a long time;
And looked around to see if the parents were watching
And since nobody saw them
Fast - Enough they do as we do.

When Goethe had really lost Käthchen after "terrible scenes", the relationship was resolved in the spring of 1768, which - due to Goethe's extreme jealousy of real or supposed rivals - had been quite problematic from the start. Goethe cured himself of the shocks he had suffered through the shepherd's play Die Laune des Verliebten , in which a jealous lover is healed when he realizes that he too can be unfaithful.

Even after the relationship ended, Goethe continued to write - quite gallant - letters to Käthchen for some time, on November 1, 1768:

"(...) I thank you for such an unexpectedly quick answer, and I ask you in the future to think of me in pleasant, cheerful hours and, if you can, to write to me; Seeing your liveliness, your cheerfulness, your wit is one of my greatest joys; it may be as frivolous, as bitter as it wants. (...) "

Anna Katharina married the lawyer Christian Karl Kanne in 1770 , who later became Vice Mayor of Leipzig. Goethe visited his first girl again in Leipzig in 1776 after moving to Weimar.

Like other women, Käthchen, with her gentler nature, balanced the tremendous temperament of young Goethe. She appeared to him as charming and perfect and thereby freed him from his youthful skepticism. The fulfillment that it brought for him already encountered "the tragic basic problem" ( Emil Ludwig ) of his life: What does it help me that I enjoy?