The Wurstelprater is the nationally known amusement park in Vienna , officially as early as 1825 Volksprater, often simply called the Prater. Its landmark, the Wiener Riesenrad , is located in the northwestern part of the Prater recreation area , near the Praterstern , in the 2nd district, Leopoldstadt .

City map section with the Wurstelprater around 1830

The Wurstelprater, as the amusement park is unofficially but consistently called, owes its name to a character from the popular theater, the " Hanswurst " created by Josef Anton Stranitzky . During the Enlightenment in the late 18th century, these popular stages were driven from the marketplaces of today's old town and found new locations in the Prater, which was opened to the public by Joseph II in 1766.

The part of the Upper Prater , equipped with entertainment establishments, was already called the Volksprater in the Biedermeier period . On the occasion of the world exhibition in 1873 , because of which the Wurstelprater was demolished in the early summer of 1872, the name Volksprater was officially set by the city administration. Today the term Volksprater is used officially, e.g. B. on the electronic city map of the Vienna city administration, but is otherwise rarely in use.

In a list of Prater establishments with over 80 items drawn up in 1825, the following can be found:

In the last decades of the 19th century the Wurstelprater crossed the exhibition street to the north. Some entertainment businesses settled in the Venediger Au , the most prominent in 1892 was the Circus Busch in the panorama building built in 1881.   In the following decades, the Venediger Au entertainment district expanded to an area of ​​48,250 m². In addition to the Busch Circus , there were riding stables, beer depots and various show booths.

Around 1900 there was probably the world's first theme park in the Wurstelprater - “ Venice in Vienna ”. It was built by Gabor Steiner in 1895 and recreated the lagoon city on the Prater's Kaiserwiese (between Praterstern and Riesenrad) in a smaller format. Water channels were created, lined with fairground booths and other entertainment options. New attractions were added every year for the summer season. 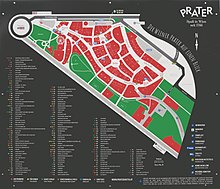 The Ferris wheel was built in 1896/97 and is now one of Vienna's landmarks. In the twenty years before the First World War , the Wurstelprater achieved peak values ​​in terms of supply and demand. In 1933, Friedrich Holzdorfer opened the ghost castle , one of the world's oldest ghost trains , on plot 96 .

During the Battle of Vienna , the Wurstelprater was almost completely destroyed in early April 1945. It was rebuilt or rebuilt in the following years, whereby the part in the Venediger Au was no longer included.

In autumn 1948, essential parts of the soon-to-be-world-famous feature film The Third Man were shot in the Prater .

In 1981 the comedy cinema between the exhibition street and the ferris wheel, the last existing Prater cinema, burned down and was not rebuilt. The cinema with around 1,000 seats had existed here since 1927 as the successor to a theater founded in 1845.

The 1898 newly built Jantsch Theater, 1905 Comedy Theater , counted with its 1,000 seats to the biggest "movie palaces" of the Prater

From 1896, when the show booth were presented by Josefine Kirbes "Living Pictures", shortly after the first public film screening , developed in the Prater a lively theater scene. A few years later there were already five such show booths, into which the walk-in customers were lured by “people calling out ” and people could go in and out as they wanted, since no demonstration times were set. Many of the short silent films and reports were shot in the Prater itself. Only with the advent of longer silent films from around 1910 did the show booths become theater-like buildings with screening times.

Since the five already existing cinemas were doing good business, the Obersthofmeisteramt (Obersthofmeisteramt), which was directly subordinate to the emperor, decided in 1912 to increase the rent tenfold, while the other companies were spared. In return, the cinema owners were promised not to issue permits for further cinemas. Until 1920, when the previous regulation in the First Republic was now deemed to be invalid, no further cinemas were allowed to open in the Prater. Until the end of the monarchy, the chief steward's office always ensured that the emperor's interests were protected. The designation “palace” was not permitted for an establishment in the Prater.

In the heyday of silent films in the 1920s, Austrian and foreign productions were shown in real “film palaces”, which some of the former show booths developed into. The largest cinema was the Busch cinema, a former circus that held between 1700 and 1800 visitors.

The seven cinemas in the history of the Prater were:

The cinema scene, unique in Austrian film history , came to an end in the bombing of Vienna by the Allies in 1945, when the Wurstelprater was extensively destroyed. The “ Comedy Theater ” was the only cinema to survive the war. However, it burned down in 1981 and, like all the other cinemas, with the exception of the Münstedt cinema , which continued to be operated in a different location in a smaller form until 1984, was no longer built.

Panorama view of the Prater

Panorama view of the Prater at night

The Prater is the most famous part of the Vienna Prater, with its numerous Schaustell- and entertainment companies with haunted houses , calendula games (carousels), wave flight, roller coasters (roller coasters), mirror and laugh cabinets , Autodrome are, drop towers and many other family-friendly establishment. There are also some slot machines and other gambling establishments .

A more recent Ferris wheel is the flower wheel, which opened in 1993 . With a diameter of 35 meters, it is significantly smaller than the Vienna Giant Ferris Wheel and, unlike it, has rotating, open cabins. Three other, albeit smaller, landmarks of the Prater are the Calafati , the Watschenmann and the Toboggan .

In contrast to many other entertainment parks, entry to the Prater area is free; the conversations consumed are to be paid for by the individual showmen. Although the Wurstelprater has joint marketing, the individual plots are leased by the City of Vienna to private entrepreneurs who operate at their own risk.

The Wurstelprater also offers a great variety in terms of gastronomy, for example the Lángos , which are available at numerous stands, and the famous Schweizerhaus , which was taken over by Karl Kolarik in 1920. Nowadays it is best known for its real Budweiser beer , which, due to its high and therefore rapid consumption, only has to be mixed with little CO 2 and therefore tastes lighter. Another specialty is the pork wagtail .

The Liliputbahn is a remarkable park railway that runs on a circuit of 3.9 kilometers in the area of ​​the Prater far beyond the amusement park. In doing so, it also crosses some roads that are open to public traffic. It has a track width of 381 millimeters and has existed since 1928, with the route being extended to the Prater Stadium until 1933 . Two steam locomotives, four diesel locomotives and four passenger train sets are available as vehicles. The main station is near the ferris wheel.

Another unusual object that stands in the Prater is the “ Republic of Kugelmugel ”, a “state” with a single inhabitant and a single house - a ball house. The "President" of the state, Edwin Lipburger , built the house in the early 1970s in Katzelsdorf, Lower Austria, and said that since his house only rests on one point and one point has no spatial extension, it is in a state-free area and he can own his proclaim their own republic. His “republic” was later shipped to the Vienna Prater and is still there today.

On the edge of the Prater, near the Ferris wheel, the planetarium with the Pratermuseum has been located since 1964 , with many exhibits telling the story of this amusement park.

A similar but much smaller facility is the Bohemian Prater in Vienna- Favoriten .

The new Riesenradplatz and the Eisvogel restaurant

In connection with the European Football Championship in 2008 (the Ernst Happel Stadium , one of the venues for the European Championship, is located in the Prater), the Wurstelprater was given an entrance area designed as a rondeau next to the Ferris wheel based on a design by Emmanuel Mongon, which was named Riesenradplatz ; Restaurants, information stands and shops were arranged around it in the style of “Vienna around 1900”.

The project was partially criticized: It was criticized in advance that there was no public tender for the 32 million euro contract . Furthermore, the project only affected the entrance area, the rest of the Prater remains “sprawled” (due to the small-scale tenant structure) and shows an inhomogeneous appearance; however, this is a typical feature of the Vienna Prater. The aesthetics of the new buildings were also partially rejected in the media.

At the end of 2008, Austria's largest discotheque, the Praterdome , was opened on the edge of Riesenradplatz .

View from the ferris wheel