This article covers the roller coaster. For the 2017 film by Josef Hader, see Wilde Maus (film) . 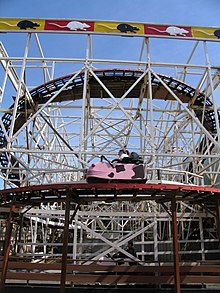 The Wild Mouse is a medium-sized roller coaster with no inversions . Most of the systems have a compact, rectangular base. The so-called mouse curves are typical - relatively tight curves without elevation and transition arcs . When driving through these curves, the impression should be created that the car is being carried out of the curve or that one is driving over the curve. This effect is reinforced by the fact that the carriage is wider than the rail and you can no longer see it as a passenger when cornering. Short descents and small hills, so-called bunny hops , are additional driving elements .

With roller coasters of the Wilde Maus type , individual vehicles are always used, which can be occupied by a maximum of four people. In modern systems, single-unit wagons with four seats in two rows are common. Older railways often have cars for two people with the passengers sitting behind one another. With some wild mice there are also wagons in which the superstructure equipped with the seats rotates around the vertical axis opposite the undercarriage (so-called spinning coaster ).

The railways use a block system with several route sections separated by block brakes . This means that several cars can always drive at the same time.

There are both wooden and steel versions of the Wild Mouse . Both stationary systems in amusement parks and transportable systems for public festivals are common. In some cases, the tracks are designed twice with a mirror-inverted route. Depending on requirements, both or just a single roller coaster can then be set up.

It is noticeable that many railways of this type also bear the name Wilde Maus or the equivalent in the respective national language.

A further development of the Wild Mouse is the so-called e-Motion Coaster by its manufacturer ( Mack Rides ) . In this design, the superstructure is not only rotatably attached to the undercarriage on the vertical axis, they can also be tilted with respect to the longitudinal and transverse axes. Carriages with six seats (three rows of two seats) are used. An example of an e-Motion Coaster is Tulireki in Linnanmäki, Finland .

Manufacturer of roller coasters of the Wilde Maus type

Examples of roller coasters of the wild mouse type 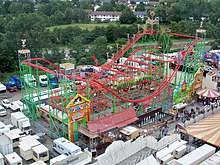