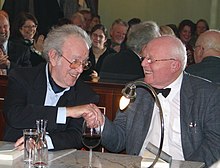 Gerhard Bronner grew up in the Favoriten Senefeldergasse in modest circumstances as the third son of the Jewish - proletarian couple Jakob and Rosa Bronner. According to his own statement, he only learned to speak High German in middle school, before he had only mastered the Favoritner dialect . Bronner's father was an upholsterer , his mother hired as a seamstress.

Gerhard Bronner was the straggler of the family: his eldest brother Emil was 15 years older than him, while brother Oskar, who was ten years older than Bronner, practically raised him. Emil and Oskar Bronner were committed social democrats and also worked for the Schutzbund , Emil was killed in the civil war in 1934 .

As a child, Bronner got to know Bruno Kreisky , who was then Young Socialist and later Austrian Chancellor, through his brothers . A school friend of his was also the future actor Otto Tausig .

Gerhard Bronner made his first musical attempts with the Rote Falken , to which his brother Oskar brought him. There he played with the "Pfeiferlbuben", the musical department of the socialist children and youth organization, first drums and later some guitar. Again it was Oskar who recognized his talent and decided to give him a musical education. By chance Bronner got his own piano at the age of five and also received lessons for a short time. Two years later he saw a performance by the cabaret artist Hermann Leopoldi and decided to become a music humorist.

Bronner always confessed to Jewish culture, but did not live religiously. Until 1935 Bronner attended high school, which he had to leave when he was five “not enough” in the winter semester. In 1938, after the “ Anschluss ” of Austria , he lost his job as an apprentice to a window dresser. In addition, his father and brother were imprisoned in the Dachau concentration camp . The family also had to pay a weekly fee of 20 Reichsmarks for this detention.

In view of his financially and existentially hopeless situation, Gerhard Bronner left Austria alone in May 1938 at the age of fifteen and crossed the green border into Czechoslovakia . In the same year his brother Oskar died in the Dachau concentration camp. The father was released from the concentration camp in the summer.

Gerhard Bronner initially lived in Brno , where he hired himself out as a window cleaner, porter and street singer. When his residence permit expired, he was taken back to the border, but a good-natured policeman let him go when he realized what fate would await Bronner in the German Reich . Bronner returned to Brno and received a second residence permit in the name of Harry Braun from the League for Human Rights . His luck did not last long, however, because when the Munich Agreement was concluded, all refugees had to leave the Czech Republic.

Bronner traveled without valid papers on and had, among other things unnoticed by the Danube swim around for Constanta to get from where it made it on a ship to Palestine managed. One of his friends at the time, who also helped Gerhard Bronner several times, was Erich Lessing .

Bronner earned his living there as a street singer, bar pianist and composer, and finally as head of the music program of the BBC's branch in Palestine. When the British withdrew in 1948, he was invited to continue working for the station at the headquarters in London. On the way there he visited Vienna briefly at the instigation of his wife at the time; he did not want to stay in this city, which he no longer considered his home.

But after a short time there were many tasks, from bar pianist to music editor on the radio, so that the onward journey to London was postponed and finally canceled. He started at the station "Rot-Weiß-Rot" . From that time on there was also a friendship with Hans Weigel , who also persuaded him to stay in Vienna.

After his return to Vienna, Gerhard Bronner found out for the first time about the fate of his parents through the Israelitische Kultusgemeinde , with whom the correspondence had been broken during his stay in Palestine: They had been deported by the National Socialists to Minsk in October 1943 .

Career as a cabaret artist

On November 12, 1952, the cabaret revue "Brettl vor'm Kopf" premiered. The fifteen numbers in the program came from the pen of Gerhard Bronner, Michael Kehlmann , Carl Merz and Helmut Qualtinger . After that, there was initially a break from playing because Gerhard Bronner and Michael Kehlmann went to Hamburg, since there was the first and only television studio in the German-speaking area and both wanted to work in this then completely new medium. Bronner was musical director of the entertainment department at NDR until 1955 , where he also released the High German version of “ g'schupften Ferdl ” as “Der pale Gustav” , which was then played by many groups that are hardly known today, such as “ The three Jools "Or" The Three Travelers ", was re-enacted.

In 1955 Gerhard Bronner returned to Vienna and leased the " Marietta-Bar ", which soon became a popular meeting place for artists. a. Peter Wehle and Georg Kreisler . In 1956 he and Kreisler leased the “ Intime Theater ” in Liliengasse. There the “ nameless ensemble ” (alongside Gerhard Bronner, Merz, Qualtinger, Kehlmann, Kreisler, Wehle, Louise Martini and others) brought out the cabaret program “Blattl vor'm Mund” and others. When their contract was terminated in 1958, they played the next program "Spiegel vor'm Gsicht" on television ( ORF ). At the beginning, the broadcast was from the “ Bürgerertheater ”, later from the “ Stadttheater ” (Etablissement Ronacher).

In 1959 Gerhard Bronner took over the “ New Theater am Kärntnertor ”, where the program “Dachl überm Kopf” premiered. When the group disbanded in 1961, especially with the departure of Qualtinger, who from now on preferred to play theater, he formed a new ensemble with the program “Wedel is man”, including Felix Dvorak, who later became a prominent theater - and became a television comedian. Gerhard Bronner then continued the theater until 1966.

The “Travnicek Dialogues” with Helmut Qualtinger (authors: Merz and Qualtinger) have not only gone down in Austrian cabaret history. Many of the songs ascribed to Qualtinger were written by Gerhard Bronner.

In the 1960s, Bronner, who directed it, was extremely successful with the Austrian TV cabaret series The Time Valve: The Current TV Board . With him, among others, Peter Wehle, Kurt Sobotka , Max Böhm , Ernst Stankovski , Peter Orthofer , Gerhard Steffen , Eva Pilz , Peter Frick , Heinz Holecek , Edith Leyrer , Johann Sklenka and Dolores Schmidinger appeared in the popular programs. One dealt, if necessary very acutely, with the current politics of Austria and other topics useful for cabaret. ORF III broadcast some of these programs again in 2012.

He not only worked with well-known cabaret artists, but also discovered young talents for whom he wrote songs. So Marianne Mendt became known with the Glock'n, which runs 24 hours a day .

From 1979 to 1988 Gerhard Bronner directed the cabaret Fledermaus , the former Marietta-Bar.

For ORF and the former Süddeutscher Rundfunk (SDR), Bronner moderated the program “ Schlager für advanceden ” and took part in the radio cabaret “ Der Guglhupf ”. There, as well as on the stage in the "Fledermaus", Bronner performed with Wehle. Present was also Lore Krainer , which he took from Graz. He also became known as a translator of Ephraim Kishon's satires (after Friedrich Torberg died in 1979), created a Viennese version of My Fair Lady in 1969 and edited the musical Cabaret .

In 1988 Gerhard Bronner moved to the USA, where he settled in Florida . "Shortly afterwards it was read in the Viennese newspapers that I was a tax evasion", wrote Bronner in his memoirs and justified his move as follows:

“In May 1986 my long-time partner and friend Peter Wehle died. Before that, Friedrich Torberg, Robert Gilbert and Carl Merz had died. I felt terribly alone. In June 1986 Kurt Waldheim became the Austrian Federal President . From that moment on, open anti-Semitism became socially acceptable again in Austria. I had always received anti-Semitic letters - but they were always anonymous. After Waldheim was elected, they were no longer. (...) Then I knew that I would not live in this country much longer. "

( Helmut Qualtinger , who died in September 1986, is one of the deceased named by Bronner .)

“So I moved to my home in Florida. Before that, however, I reported this to my responsible officer in the Ministry of Finance. (... ...) So if I returned to Vienna I had to expect a prison sentence. So I stayed in Florida (... ...). "

A fundraising campaign among friends and admirers initiated by Robert Jungbluth made it possible to settle Brunner's fine (the tax debt had already been overtaken by the tax authorities by seizing Brunner's fees). He returned to Vienna in 1993, where he performed again.

On December 31, 2006 he made an appearance in the Vienna Theater Akzent , which was recorded. Bronner sang his great successes, such as Der g'schupfte Ferdl or Der Papa will fix it .

Bronner's grave at the central cemetery

Gerhard Bronner died at the age of 84 on January 19, 2007 in a Viennese hospital as a result of a stroke . The funeral took place on January 26th at the Vienna Central Cemetery . After the funeral in the ceremonial hall of the new Israelite department, at which Federal President Heinz Fischer appeared as a speaker, Bronner was buried in the old Israelite department in an honorary grave next to the writers Arthur Schnitzler and Friedrich Torberg. The recording of Bronner's last appearance was broadcast by ORF under the title An Evening with Gerhard Bronner .

As reported on November 9, 2014, the heirs of Bronners have now donated his extensive written and pictorial legacy to the Austrian National Library . There are eleven large boxes that also contain collaborations with Elfriede Ott , Eva Pilz and Michael Kehlmann . (The original manuscript for the 1952 song Der g'schupfte Ferdl came to the library as a personal gift from Bronner in 1972.)

Bronner was married three times, his son from his first marriage Oscar Bronner is the founder and publisher of the daily newspaper Der Standard . Oscar is named after Bronner's older brother, who perished in a concentration camp. His second marriage was to actress Bruni Löbel , their son Felix is ​​a freelance pianist and piano teacher. The children David (pop music producer) and Vivien (television producer and screenwriter) come from the third marriage . Bronner's third wife Margaret died of cancer at the age of 41, the day after her death the satirical program "Der Gugelhupf" (1978) was broadcast for the first time.

In his autobiography "Mirror in front of the face" Bronner states that his father is said to have named him after the playwright Gerhart Hauptmann . Jakob Bronner saw a performance of the play " Die Weber " and decided to name his next-born after the author. When issuing the birth certificate, an error occurred and therefore Bronner became Gerhard with "d" instead of "t". His first name, which is atypical for Jews, was always abbreviated to "Gertl" at the beginning, while Bronner called himself "Jehuda", or "Juda" for short, during his time in Israel.