The war in the colonies in Asia and America

Elector Maximilian III. Joseph issues the civil code Codex Maximilianeus Bavaricus Civilis ( CMBC ) for Bavaria . The work, comprising four parts and over 800 paragraphs, has been entirely developed by Wiguläus von Kreittmayr and has been the legal basis for civil law in the Duchy of Bavaria for many decades .

Other events in India

Festivity in which Paravicini is surrounded by local rulers

In the Treaty of Paravicini , 48 rulers from West Timor and the nearby islands of Solor , Roti , Sawu , Sumba agree an alliance with the Dutch East India Company , which at that time is in a struggle with Portugal for supremacy in the region. The driving force behind the contract and namesake is the Dutch diplomat Johannes Andreas Paravicini . The political division of the island of Timor , which still exists today, is cemented.

King Friedrich II. On one of his inspection trips, inspects the potato cultivation 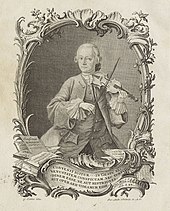 Portrait of Mozart in the 1st edition