The Allegheny River (also Alleghany River , O-hee-yo or O-hi-o ) is the right source river of the Ohio River in the eastern United States .

The name Allegheny may come from the Lenape welhik hane or oolikhanna, which means "well flowing river of the mountains" or "wonderful stream".

Another indication of the origin of the word Allegheny was given in 1780 by David Zeisberger , a missionary of the Moravian Brethren : "All this land and region, stretching as far as the creeks and waters that flow into the Alleghene the Delawares called Alligewinenk, which means' a land into which they came from distant parts'. The river itself, however, is called Alligewi Sipo. The whites have made Alleghene out of this, the Six Nations calling the river the Ohio. ”So it would be the“ river in the country where people came from far away ”.

For the North American Native Americans of the Iroquois League , the Ohio and its largest headwaters, the Allegheny, were always just one river, which they called the Ohio along its entire length. 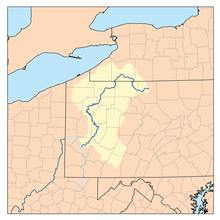 Location of the Allegheny

The Allegheny rises on Cobb Hill near the village of Gold ( Allegany Township ), in Potter County in the US state of Pennsylvania . From there it flows northwest through New York State and back to Pennsylvania. At Point State Park in Pittsburgh , the Allegheny and the Monongahela River become the Ohio River, which then flows into the Mississippi River .

The Allegheny is 523 km long, 110 km of which are navigable between Pittsburgh and East Brady .

The water flow of the Allegheny River exceeds with 559 m³ / s that of the Monongahela River (358 m³ / s; see there ), which makes it the main source river of the Ohio. Since the Ohio is also the significantly larger river at the confluence with the Mississippi (mean water flow: 7,973 m³ / s compared to 5,865 m³ / s), hydrologically the Allegheny is even the upper reaches of the Mississippi river system.