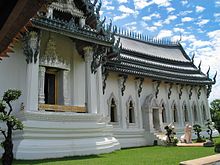 King Khun Luang Sorasak ( หลวง สร ศักดิ์ ม or Phrachao Suea - "Tiger King", พระเจ้า เสือ ) had two sons, Prince Phet and Prince Phon. On his deathbed, Sorasak named Prince Phet as his successor. He was crowned as Phuminthararatcha (also Sanpet IX. , สมเด็จพระเจ้า สรรเพ ช ญ์ ที่ 9 ), but was generally called King Thai Sa (also Thai-Sra , พระเจ้า ท้าย สระ , literally “end of the lake” because of a pond in front of his Palace) known. He ruled from 1709 to 1733. His brother Prince Phon became his Uparat ("second king" or "viceroy"). After the death of King Thai-Sa in January 1733, there was a revolt because he did not declare the Uparat to be his successor, as expected, but the middle of his sons. In the course of the fighting, Prince Phon was able to get rid of his brother's three sons, two were killed and one fled to become a monk . Then he was crowned king as Boromma Thammikarat ( the just king , "Song Tham" for short). The gloomy name "Borommakot", literally "The king in the golden urn (awaiting his cremation)" was only given posthumously, since he was the last king to receive this rather unpleasant honor.

King Borommakot ruled with wisdom and dignity. He was 53 years old at his coronation and died at 78. He allowed three Cambodian princes, who had found refuge in Ayutthaya, to gather troops in the region of Nakhon Ratchasima in 1737, with whose help the reigning king of Phnom Penh was overthrown and the loyal Thommo Reachea could be brought to the throne in 1738. The Siamese also provided successful aid in 1747, when his successor, supported by the Vietnamese, was overthrown again.

During the reign of King Borommakot, diplomatic relations were reestablished with Burma after they had been idle for about a century. In 1744 a mission from the King of Ava was received at the court of Ayutthaya, and the following year the counter-mission was sent to Ava. Burmese refugees from Pegu were gladly accepted in Ayutthaya.

Borommakot's reign is also known as the "Golden Age of Ayutthaya ", as it is associated with the traditional virtues of a good king.

The king was a strong advocate and supporter of Buddhism . The Dutch businessman Theodorus Jacobus van den Heuvel reports z. B. in March 1737 of an annual pilgrimage by the king to Wat Phra Phutthabat (near today's Saraburi ).

In 1751 a delegation of Buddhist monks from the Kingdom of Kandy arrived. They asked for an exchange of scriptures and for assistance in restoring Ceylon Buddhism. King Borommakot gladly complied with this request, he sent two missions to Kandy, in 1753 and 1755. The monks took with them golden statues of Buddha, the Tripitaka ( Pali canon ) and a letter from the king written in gold. These missions were not a lucky star, the first ship sank in the mud off Nakhon Si Thammarat and the monks took 18 months to reach Ceylon , two thirds of them died on the way. On the second mission, most of the monks were rescued after a shipwreck off the coast of Sri Lanka. They stayed for years, ordaining hundreds of new monks, and providing them with a complete copy of the scriptures. The annual "Perahera", during which the sacred tooth relic is still carried through the streets of Kandy in a large parade, was created through the support of the Siamese monks from a Hindu ceremony. Since Sri Lanka has always been regarded as the spiritual center of Theravada Buddhism, it was a small triumph for Siam to send these two missions. The Ceylonese monks ordained by them were called "Siam-wong". There is a wall painting in Wat Buddhaisawan in Ayutthaya, in which Siamese monks are shown on a pilgrimage to Adam's Peak .

During the reign of King Borommakot, many artists , poets , artisans and writers gathered in Ayutthaya. The Siamese literature and art reached after the death of King Narai in this time again a highlight as the self-versed in literature King promoted the arts and also wrote himself. However, it is less the king himself than a talented man of letters that has remained in the minds of the Thais. His son Chaofa Thammathibet ( เจ้า ฟ้า็ ธรรม ธิ เบ ศร or "Chaofa Kung"), on the other hand, is mentioned in every cultural-historical text, the beauty of his verses and the poetry of his language are praised. His “rowing songs” and his Nirat poems are read in every school in Thailand today. "Theater poems " ( บท ละคร - [ bòt-lakʰɔːn ]) were written for the first time during the reign of King Borommakot. Their subjects were taken from the three great epics of Thailand, the Ramakian , Inao and Unarut .

According to the recorded chronicles , the king preferred to restore dilapidated monasteries instead of building new ones.

Succession to the throne

During Borommakot's reign, power struggles began again and again, but he always emerged victorious, so that a relative peace was maintained for 25 years .

After Borommakot's death in 1758, a throne dispute broke out between his two sons Ekathat ( พระเจ้า เอก ทัศ ) and Uthumphon ( สมเด็จ พระเจ้า อุทุมพร ), when Utumpon , who was actually second in line to the throne, was appointed the new king. Prince Ekatat apparently seemed too clumsy to his contemporaries to succeed the great king - his father had already advised him during his lifetime to renounce the throne and become a monk for life.

Siamese and Thai kings since the beginning of the Ayutthaya kingdom