Portrait of Ramas III in the great palace 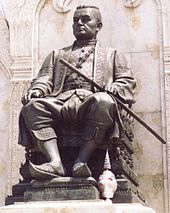 The maiden name of Ramas III. was Thap. He was the eldest son of King Ramas II. His mother was a concubine of the father. Therefore, he did not have the title of Chao Fa , that is, a prince of the first degree. His younger half-brother Mongkut , who emerged from the marriage of Ramas II with his main wife, was considered heir to the throne . Rama II named Thap Prince Chetsadabodin in 1813. He called him a Chao Sua ("merchant"), as he was already able to prove a lucky hand in business with foreign countries as a prince. A traditional trick: it ensured that valuable goods were exported and heavy goods imported, which meant that ships with a sufficiently high tonnage were always anchored in Bangkok. As a prince he was allowed to manage the port of Bangkok and was given the supervision of the Phrakhlang Ministry , the Ministry of the Treasury, which was also responsible for foreign relations and trade. He worked closely with Dit Bunnag, who was the senior official in the Phrakhlang Ministry and head of the powerful Bunnag family .

After the death of his father, Chetsadabodin was appointed king by the Privy Council . He was much more mature, more experienced in state affairs and better networked with politically influential circles than the actual heir to the throne, Mongkut. This went to the monastery. It is likely that the old king had chosen Chetsadabodin as his successor before his death and initiated the monastic ordination of Mongkut in order to prevent intrigues or even a civil war for the succession, from which Chetsadabodin and his powerful supporters would have emerged victorious anyway .

In order to stimulate the economy further, he had waterways (including the khlongs in Bangkok) dug, which should connect the country's major rivers. The major waterways are still in operation today.

There were conflicts with the Laotian kingdom of Vientiane , whose king Anuvong rebelled against the Siamese rule and also invaded the Isan . He was brought to Bangkok by General Bodindecha in 1828 . There Anuvong was publicly exhibited on the king's orders and eventually martyred to death. From 1838 to 1839 the Malays in Kedah rose against Siam and were laboriously thrown down. Between 1841 and 1845, Siam fought the Siamese-Vietnamese War over Cambodia . General Bodindecha was able to distinguish himself again. After the peace agreement, the Siamese well-meaning King Ang Duong was placed on the throne of Cambodia.

The foreign policy of King Rama III. was marked, however, by great caution towards the Europeans, finally the first attempts at colonization began in Southeast Asia . He wanted to learn from them what was useful, but without adopting their lifestyle.

To his younger half-brother and successor Mongkut (Rama IV.), Whom he had chosen himself according to his abilities, he left an economically healthy country that experienced a new heyday of culture and continued the successful swing policy towards the Europeans.

Siamese and Thai kings since the beginning of the Ayutthaya kingdom