Sumba is an 11,150 km² island in the Lesser Sunda Islands and belongs to the Indonesian province of East Nusa Tenggara .

In the north, across the Sumbastraße belonging to Lake Sawu , are the islands of Sumbawa , Komodo and Flores , in the east Sawu and Timor and in the south the Indian Ocean extends . To the south, off the coast of Sumba, are the three small islands of Halura , Koatak and Mangkudu .

The island is traversed in a west-east direction by an approximately 150 km long and up to 40 km wide region with mountains, which divides the climate into two areas. In the south-west half of the year, with up to 1,600 mm, more rain falls than in the drier north-east, where precipitation is sometimes less than 600 mm per year.

Regular burning of the areas has led to the impoverishment of the soil and vegetation in large parts of Sumba. In many cases only a savannah-like landscape on eroded karst surfaces is left. Less than ten percent of the area of ​​Sumba is still forested. 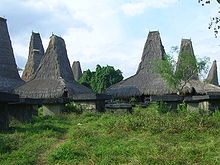 Traditional houses next to Bondokodi in Western Sumba

Sumba has 685,186 inhabitants (as of 2010). The population consists of a mix of Malays and Melanesians . In 1866 the first Christian mission was founded by Jesuits in Laura in western Sumba. The first Protestant missionaries followed in 1881 in Melolo in the east of the island. In order to avoid rivalries between denominations, the Dutch colonial government stipulated in the Flores-Sumba Treaty in 1913 that the Jesuits were allowed to proselytize on Flores and the Protestants on Sumba. Today 65% ​​of the population are at least outwardly Christian. The majority of the population are Calvinists, only a minority profess the Roman Catholic faith. Another 25–30% practice the traditional Marapu religion. The members of the Muslim minority are mainly of Buginese origin. They live on the coast and in the large settlements, especially in Waingapu and Waikabubak.

The way of life of the inhabitants of Sumba is characterized by traditional rites. The ancestor worship has great significance for the Sumbanese. The ritual slaughter of animals at weddings, funerals and other cultural occasions is an integral part of life. Every February there is the Pasola Festival, one of the most famous traditional festivals in Indonesia and the island's biggest tourist attraction. Even today there are pronounced social classes (castes) in the population with seemingly feudal structures, although this is less pronounced in the west of the island.

The megalithic tombs and the architecture of the old clan settlements are striking.

Sumba divided into several small empires, each with a Raja as ruler. Headhunting and slave trading were common in the conflict between these empires. The heads of slain enemies were displayed on skull trees (andung) in the center of the village. The villages were often built on hills for defense, surrounded by stone walls. It is possible that some of the Rajas were vassals of the kingdom of Majapahit from the 14th century , which expanded from Java and disintegrated again at the end of the 15th century, later followed by the Bima of Sumbawa and the Gowa of Sulawesi . Was traded with sandalwood , whose stocks are but meaningless today. Hence the name Sumbas came from in the 16th and 17th centuries: "Sandalwood Island". In addition, textiles and food were sold to Arab and Chinese traders, and later to Europeans. The Sumbanese received fabrics, porcelain, gold and metal tools in return. The Arabs brought horses to Sumba.

The Portuguese were the first Europeans to reach the island in 1522, followed by the Dutch and British shortly afterwards. In 1845 the Dutch signed treaties with several Sumbanese rulers in which Dutch sovereignty was recognized. From 1866 the island belonged to the Dutch East Indies , but real colonial control could only be established in the 20th century. After the Second World War , Sumba became part of independent Indonesia. Due to the fragmentation into different kingdoms and clans, there were repeated armed conflicts within the population of Sumba until 1990. Even today, due to these rivalries between the clans, mutual cattle theft and vigilante justice still occur in some parts of the island.

In the southwest, the land is suitable for growing rice . In addition, cashews are planted for resale . In the very dry north-east, maize and peanuts are mainly grown for personal use and pasture farming for domestic exports. Mainly cattle and horses are bred. Fabrics are traditionally manufactured using the Ikat weaving technique.

There are two airports: Waingapu in East Sumba and Tambolaka in Northwest Sumba . There are connections to Denpasar on Bali and Kupang on Timor four times a week . The sea transport runs via the port cities Waingapu and Waikelo . The land connection between the most important settlements (the central west-east axis) works through a comparatively well-developed paved road. The rest of the island, especially the north and south coasts, are poorly developed in terms of infrastructure. Large parts of the population of Sumba have inadequate access to drinking water and medical care.