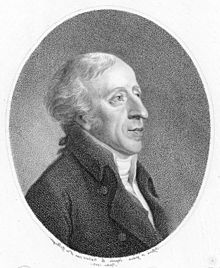 Vincenzo Righini received his education at the Accademia Filarmonica in Bologna, with Padre Martini . The first appearances are documented around 1769 in Florence and 1770 in Rome. Then he was employed as a tenor in the Prague Opera Company of Giuseppe Bustelli , for which he also composed operas. From 1777 to 1788 he worked as a singing teacher and composer in Vienna. During Antonio Salieri's stay abroad , Righini was deputy court conductor for several months in 1787. His Viennese students included Josepha Weber and Maria Theresia von Paradis , among others .

In 1788 Righini entered the service of the Elector of Mainz Friedrich Karl Joseph von Erthal as court conductor . Since Righini was called to Berlin as the Prussian court conductor in 1793, Righini's position in Mainz was taken over by Franz Xaver Sterkel . In Berlin he met the opera singer Henriette Kneisel and married her in 1794. The marriage was divorced in 1800. During his time in Mainz, too, Righini advanced to become a singing teacher of considerable renown, including for Bettina von Arnim and possibly Princess Elisabeth of Württemberg .

Among his compositions, in which the German element has already come to the fore alongside the Italian element, the Missa solemnis in D minor for the coronation of Emperor Leopold II (Frankfurt, 1790) and a Te Deum in 1809 to celebrate the return of the royal couple should be emphasized from Königsberg . Righini was director of the Italian court opera from 1793, first with Johann Friedrich Reichardt and from 1795 with Friedrich Heinrich Himmel .

When from 1797 Friedrich Wilhelm III. reduced court music, Righini was released from numerous tasks and began concert tours that took him to Hamburg, Ludwigslust and Italy.

In 1790/91 Beethoven wrote his Twenty-Four Variations on the ariette “Venni Amore” by Vincenzo Righini for piano (D major) WoO 65.

Righini died in 1812 after a long illness on a vacation trip to his native city of Bologna.