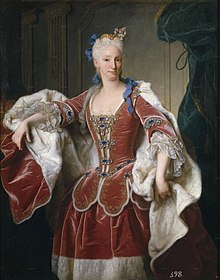 Elisabeth Farnese as Queen of Spain

She was the daughter of Hereditary Duke Odoardo II. Farnese of Parma and Piacenza (1666–1693) and his wife Dorothea Sophie von Pfalz-Neuburg . She was heir to the childless last Duke Antonio Farnese , who died on January 20, 1731. The inheritance consisted of the duchy, but also the property of the family in and around Rome , the Palazzo Farnese , the Villa Farnese , the Villa Farnesina , but above all the Farnesian collections .

Elisabetta was married to the Spanish King Philip V (1683–1746) from the Bourbon dynasty since September 16, 1714 . She had seven children with him:

Elisabetta Farnese was superior to her melancholy husband in many respects; she was educated, interested in art, politically active, and also endowed with a strong will. Her first act, as soon as she stepped on Spanish soil, was to dismiss the hitherto almighty Madame des Ursins. Whether this was done with the express approval of Louis XIV and Madame de Maintenon , as the Duke of Saint-Simon claims in his memoirs, can neither be clearly confirmed nor refuted.

In any case, the Queen, who appeared to be in complete control of the King, together with her adviser, Giulio Alberoni , who has now been appointed cardinal, directed Spanish politics for a long time. After her husband's abdication in 1724, she managed to get her stepson Ludwig to appoint her confidante Juan Bautista de Orendáin as Spanish Prime Minister. After the early death of Ludwig and the re-assumption of the throne by Philip V, she was the driving force behind the dismissal of José de Grimaldo as Prime Minister, who was replaced by Orendáin.

Her political goal was primarily to regain the former possessions in Italy , which she finally achieved after initial failures and the resulting overthrow of Alberoni in 1719 with military and diplomatic means: Her eldest son Karl (who initially had a subordinate place in the Spanish line of succession proved that Philip already had sons from his first marriage) received the Duchy of Parma and Piacenza for himself and his descendants in 1731 , which he exchanged for the Kingdom of Naples and Sicily in 1735. After an Austrian interlude and another successful war, Parma and Piacenza got his brother Felipe, the son-in-law of the French king, in 1748. With these two dynastic successes, Elisabetta became the founder of the Bourbon-Sicily and Bourbon-Parma branches .

As Ferdinand VI. , Philip's last surviving son from his first marriage, became King of Spain in 1746, Elisabetta was inevitably pushed into the background. During this time she had the palace of Riofrío built as a widow's seat. But when her stepson died childless 13 years later and her own eldest son Karl as Karl III. (Carlos III.) Became king of Spain, not only was her old influence restored - Elisabetta also became the ancestor of the Bourbon royal dynasty, which is still ruling today in Spain.